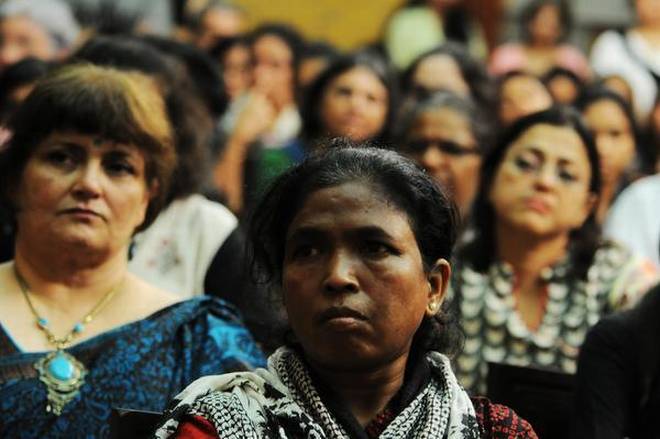 In June last year, Madkam Hidme from Gumpad village in the dense forests of Sukma in South Chhattisgarh, was raped and killed, allegedly by security forces. She was 23. The governing authorities of Bastar celebrated Madkam’s death, calling it the killing of a hardcore Maoist. For the people of Gumpad, this compounded the tragedy. Who could they turn to for justice?

They sent a message to Soni Sori, the Aam Aadmi Party (AAP) leader in Bastar. Soni quickly launched and led a sustained public campaign to secure justice for Madkam’s family.

The case was taken to the Chhattisgarh High Court, which ordered the exhuming of the woman’s body for a second autopsy and, subsequently, a judicial probe.

Soni did not stop there. She launched a ‘tiranga yatra’ (tricolour march) from Dantewada to Gumpad — part of the Red Corridor — and hoisted the national flag on Independence Day 2016, something even heavily armed security forces have been unable to do in the past years.

How did this former school supervisor become the first person approached by tribal people every time they face injustice? Her early story seems ordinary, almost banal.

Soni was born in a tribal family in Bade Bedma village in the Kuwakonda block of Dantewada, South Chhattisgarh. After primary school, she went to Mata Rukmini Adivasi Kanya School in nearby Dumrapal for her secondary and higher secondary schooling.

Around the time she was finishing school, she fell in love with Anil Futane, a small-time trader from Nagpur who had settled in Geedam, Dantewada. “We got married and settled down in Geedam,” she says. “After a year, we went to Dantewada. My family was angry with me for marrying Anil. They did not speak to us for almost two years, until our first daughter Muskan was born.”

In 2002, she got a job as a teacher in Nilavaya, another village in Dantewada. “After two years, I was promoted, and became the supervisor of an ashram school in Jabeli village. I shifted with my husband to Sameli, three kilometres away. Life was simple and smooth. We were happy in our peaceful world,” Soni recalls.

Around 2006, Maoist activity slowly entered the region. The police began rounding up villagers to uncover Maoist sympathisers. “Anil and other villagers were detained many times, and I would go to the police station with other villagers to get them released. Then, from 2008, they began questioning me too.”

That was the year an incident in Bade Para village changed the course of her life. “Three villagers were made to wear Maoist uniforms and killed by security forces. I was the sole witness; I also saw the corpses being thrown into a pit. I gave an interview to a TV journalist and told him what I had seen. I requested him to keep my identity secret, but somehow the police found out and they came to my house, abused me and warned me about speaking to the media. After this, my husband became a regular target.”

As the situation worsened, a friendly CRPF officer advised Anil to move to Geedam; he went with their three children. “I stayed back in Jabeli, going to Geedam only on weekends. Anil started a transport business. The Geedam police too used his vehicle sometimes.” Life returned to a semblance of normalcy.

My eldest daughter has told me never to compromise. She told me I have become a symbol of hope and justice for thousands of tribals. This motivates me.

Until 2010. When Avdhesh Gautam, a local Congress leader, was attacked by Maoists, Anil was once again summoned to the police station. “He was implicated in the attack and arrested. Next day, I was asked to visit the Dantewada SSP office where a senior officer abused me verbally and called me a Maoist supplier. I asked him for proof and begged him to release Anil. The officer began to beat me.” Soni says she was targeted because of her opposition to Gautam, which had resulted in him losing government contracts.

With her husband in jail, Soni struggled but managed to keep her job and her children in school. By now, both her father and nephew were being targeted by the Maoists and by the police. Soni was accused of being a conduit between Maoists and the Essar Group, which had a plant in Kirandul.

Then, the Maoists claimed she was taking money in their name. “I was being implicated in such a way that both the police and the Maoists were after me. I somehow managed to escape to Delhi, and was trying for anticipatory bail, but the court was on vacation. On October 4, I was arrested and sent to Tihar.”

The worst was yet to begin. From Delhi she was transferred to Dantewada in Chhattisgarh despite her pleas. It was here that she was sexually assaulted, with stones inserted in her genitals. “A senior police officer in Dantewada was involved in the sexual torture,” she says.

The next two-and-a-half years were spent in four prisons. And with both parents in jail, the children were separated: Muskan sent to a hostel, Deependra to Soni’s father, and Aksara to Anil’s parents. Finally, in 2013, lawyers Colin Gonsalves and Prashant Bhushan got her released on bail.

Everyone advised her to stay in Delhi, but “I had decided to come back and fight for justice. No fear was left in my mind as I had faced the worst torture any woman can face.”

Meanwhile, Anil was acquitted but his health had deteriorated in jail and he died within a month of his release.

This is when, on Prashant Bhushan’s advice, Soni joined AAP and contested, and lost, the elections in 2014. Then, in November 2015, a tribal woman from Kukanar area of Sukma was abducted by the police.

“The villagers were protesting in front of Kukanar police station. I went to participate in the protest.” The villagers made her their leader. “I had no intention of leading, but the people were enthused to see me.”

The protesters blocked the national highway and gheraoed the police station for three days. Soon, the missing woman was declared found by the police, and the protest ended. Since then, Soni has led a number of protests, most of them against extra-judicial killings. She has also raised her voice in support of journalists and human rights lawyers in Bastar, where she was attacked by unknown assailants in February 2016. But it didn’t deter her and she was back in Bastar within a month.

Sometimes, I am angry at myself for not being violent despite facing such extreme atrocities.

Aside from the huge campaign she launched to secure justice for Madkam Hidme, she sheltered the family of Arjun, a teenager branded a “dreaded Maoist” and killed by the police. The government has given her security guards. “People call us,” says Lingaram Kodopi, her nephew. “They ask her to lead them. If she gives one call, lakhs of tribals will come on to the streets.”

“My protests are strictly peaceful,” says Soni. “I tell villagers not to bring even traditional weapons.”

Being part of a political party is partly strategy. “I want to work as a social activist but the political background gives me some protection from the police. I will contest elections if the people of Bastar want me to. AAP’s support base is increasing in Bastar, and people think Soni Sori will fight for them if they join the party.”

Sori says that she tells them she will fight for them even if they don’t join the party. “I don’t take part in the protest as a political leader but as a tribal activist. I invite all parties and leaders to take part in these protests as these are people’s protests and not one party’s protests.”

Other things have stayed the same. On one hand, every now and then she has the police threatening to cancel her bail. (She must go to a police station in Dantewada every week as part of her bail conditions.) On the other hand, the Maoists target her. “The Maoists fear my peaceful protest as it will make their armed rebellion ineffective.”

She has begun to dare the police to arrest her. “They promise to drop the cases against me if I stop my activism. My only weakness is my children. I am scared for them. They lost their father and their mother was assaulted in jail. I think of sending them away, but I won’t be able to stay without them. At the same time, I cannot live without my fight for justice; I have seen my husband tortured in front of my eyes. But my children support my fight. My eldest daughter has told me never to compromise. She told me I have become a symbol of hope and justice for thousands of tribals. This motivates me.”

Soni thinks the problems of Bastar can be solved if the people sit together and decide on a common cause. She wants to push to make that happen. “Sometimes, I am angry at myself for not being violent despite facing such extreme atrocities. But I am also happy I didn’t leave the path of peace. My method is a mix of Gandhi and Bhagat Singh.”

And she is determined not to leave Bastar. “When we were in jail, my husband once said we should leave Bastar and settle somewhere else. I told him I won’t stop fighting even if I have to sacrifice my life.”

Maharashtra failed its urban poor, says report by Centre
Elgaar Parishad Case- 10 accused allege ‘political censorship’ by jail authorities
SAFFRONIZATION OF EDUCATION? - Another rewrite of history textbooks could be on cards
India - Survey to find out condition of women in mental asylums