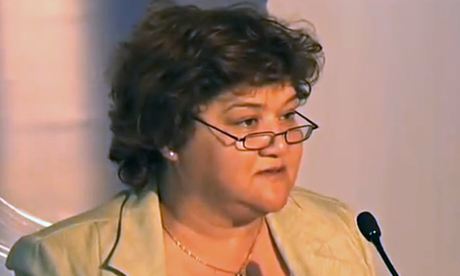 The South African president, Jacob Zuma, has appointed the country’s first openly gay cabinet minister, thought also to be a first in Africa and a symbolic step on a continent enduring a homophobic backlash.

Brown, 52, who is coloured (of mixed race ancestry), was born in Cape Town and was premier of Western Cape until the African National Congress (ANC) lost control of the province to the opposition Democratic Alliance in 2009.

According to a 2008 profile of her by the South African Press Association, she began her career as a teacher and gained a certificate in gender planning methodology at University College London. “I can’t bear working in an environment where things don’t get done,” she was quoted as saying. “I’m not a flamboyant type of person, I get things done.”

Her personal interests were said to be playing golf, reading and “an admiration of arts and culture”.

She is not seen as a gay rights activist but her ascent to a cabinet post was described on Monday as a significant moment. Eusebius McKaiser, a broadcaster and political author, who is gay, said: “It is, sadly, probably newsworthy, I guess, insofar as the social impact of openly gay people in high-profile public leadership positions cannot be discounted in a country like South Africa where levels of homophobia, including violence against black lesbian women, remain rife.

“The symbolism matters also from an African perspective too given other countries around us are enacting and enforcing laws criminalising same-sex sex and lifestyles.”

Steven Friedman, director of the Centre for the Study of Democracy, said: “I think it’s worth drawing attention to. She’s not a gay rights campaigner – it’s not recognition in that sense – but the fact that under the most socially conservative president since 1994 there is the first openly gay minister in such a position is significant.”

South Africa was the first African country to legalise gay marriage but Zuma, a traditional Zulu polygamist, has previously been criticised for culturally fundamentalist remarks and failing to condemn anti-gay crackdowns in Nigeria and Uganda.

Asked by the Guardian in 2012 about his views on same-sex marriage, the president replied: “That does not necessarily require my view, it requires the views of South Africans. We have a constitution that is very clear that we all respect, which I respect. It has a view on that one, that gay marriage is a constitutionally accepted thing in South Africa. So no matter what my views would be.”

Meanwhile Zuma, 72, who was inaugurated on Saturday for a second term, named Nhlanhla Nene as finance minister, the first black person to hold the position. Nene, 55, had served as deputy to the widely respected Pravin Gordhan, who is of Indian ancestry.

Nene, whose first name means “luck” in Zulu, is a former parliamentarian and chair of the finance portfolio committee. He spent 15 years at the insurance firm MetLife, where he was a regional administrative manager and where, during racial apartheid, he organised the country’s first strike in the financial sector.

Razia Khan, Africa’s regional head of research for Standard Chartered Bank, told AFP: “Nene is an old hand at the treasury. He will be seen to represent policy continuity.”

Cyril Ramaphosa, a former miners’ union leader turned billionaire businessman, becomes deputy president. But Friedman suggested he was far from certain to succeed Zuma. “That’s far more complicated. He doesn’t like taking political risks. The succession may revolve around some regional issues. KwaZulu-Natal is the biggest province and they’re pushing to choose the next president. I don’t think the other provinces will be keen on that.”

After a punishing five-month strike in the platinum mines, the mineral resources minister, Susan Shabangu, was removed. The police minister, Nathi Mthethwa, who was in office during the killing of 34 striking miners at Marikana in 2012, was also shifted from his post.