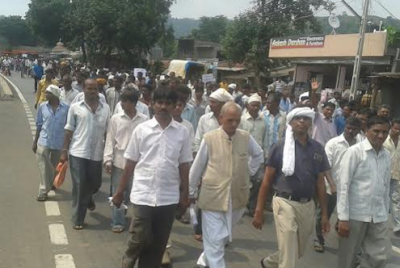 By Ashok Shrimali*
A fresh tribal rebellion is brewing in South Gujarat. As many as 6,000 adivasis of 121 villages in and around Soolpaneshwar wildlife sanctuary, situated just next to the controversial Narmada dam, have gone on warpath. They are protesting against the Government of India’s decision to declare the entire sanctuary and the area next to it – about seven kilometers radius surrounding it – as “eco-sensitive zone.”
Following a powerful rally, organized by Adivasi Ekta Parishad, headed by tribal leader Ashok Choudhury, in which  people of 121 villages, as other villagers of Dediapada and Sagbara talukas participated, a memorandum submitted to the local authorities said they have “not been consulted” before declaring the area as eco-sensitive zone. The memorandum has been addressed to the secretary, Ministry of Environment, Forests and Climate Change.
The fresh protest is in addition to at least three other anti-government movements going on with tribal participation in South Gujarat. People of more than sixty villages around the Narmada dam have been raising their against the decision of the government to develop the Kevadia colony – where the dam is situated – as a tourism spot, next to the Sardar Vallabhbhai Patel‘s 182-metre statue, which is under construction.
According to the tribals around the Narmada dam, if the tourism project is implemented, they would lose their precious agricultural land. In fact, according to them, the land where the Kevadia colony housing government engineers and other staff for building the dam hase already been vacated as officials have been shifted, and the tribals want it back.
Not very far away, the Adivasi Kisan Sangharsh Morcha (AKSM), an upcoming tribal farmers’ organization under the leadership of Romel Sutariya, has been demanding action against the sand mafia in the riverbed off Chhotaudepur township. AKSM’s radical postures led the state government to brand Sutariya’s organization “Naxalite”, even impose prohibitory orders by citing the danger of terrorist activities, which it had to regret later. 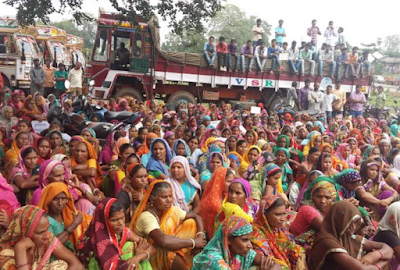 The representation by Soolpaneshwar sanctuary villagers says that the notification for hearing on the area declaring it and seven kilometers radius around it as eco-sensitive zone was “never never made available” to them published in Gujarati, and they had to “obtain” a Hindi version on their own. “This type of indifference is shocking”, they insist.
Further, the representation says, the decision to declare it an eco-sensitive zone has been taken at a time when the villagers are being enrolled for handing over land they had been cultivating for several decades under the Forest Rights Act (FRA), 2006. “The decision clearly violates the FRA, 2006, which clearly states that the gram sabhas have the right to decide about the future of the forests”, the representation says.
The representation further says that, even for declaring an eco-sensitive zone, there has to be an official procedure, “which has not been followed.” A high-level committee would need to be formed, consisting of the chief wildlife warden of the Gujarat government, a wildlife expert, a senior official of the state revenue department, and a senior panchayats representative for finding out pros and cons.
“However, this has not been done”, the representation points out, wondering how could the area be declared eco-sensitive without this process being completed or taken the view of the villagers. “We firmly oppose the Government of India move, and want the decision to be immediately taken back”, it adds.
“Instead of declaring it an eco-sensitive zone, it would be better if the government concentrates on providing basic infrastructure such as roads, water, medicine and electricity, which is not there in many of the villages”, the representation says, adding, “Villagers have to walk from five to 10 kilometres to access transportation even today.”
—
*Senior activist, Gujarat