Sri Lanka: Where Disappearances Served As A National Security Imperative To Nation-Building?

Reading through this study by an Australian doctoral researcher Jane Thomson-Senanayake published by the Asian Human Rights Commission, May 2014, I am forcibly reminded of the lessons that history should teach us if a modicum of sense informed our thinking on Sri Lanka’s crisis of state accountability. As I write the review, Muslims shops and houses in Sri Lanka’s South have been vandalized, lives have been lost and people injuredas a result of trades by the Bodu Bala Sena which drapes the Buddhist flag around itself but epitomizes the very opposite of the tolerance and compassion that the Buddha taught. Christian churches, mosques and kovils have been at the receiving end of crude religious hatred by fear mongers who parade themselves on national television but nevertheless are not dealt with by the law.

At the other geographical end of the country, the Tamil people live in guarded fear, mistrusting themselves even as their towns and villages are garrisoned and militarized, military spies infiltrate their neighborhoods and traditionally closely woven communities fracture. To a tourist visiting this land of quite unbelievable beauty, these strains appear invisible. Yet as seen paradoxically as Buddhists observe a time of high religious significance when the royal missionary monk Mahinda perched the first sermon to the ruling king at the ancient capital Anuradhapura, it only takes a spark for a violent conflagration to erupt. This is an unpalatable reality that casual visitors would also discover to their disadvantage.

Post-war Sri Lanka should have been dominated by the reaching out of Sinhala, Tamil and Muslim communities to each other with the aim of building anew a liberal framework for common existence. But in converse what we are experiencing is a rise in communal hatred. This is a dangerous flirtation with the past as race/religious riots in Sri Lanka’s past teach us only too well. But we have inexplicable amnesia regarding our history. We appear condemned to repeat it, yet and despairingly yet again. 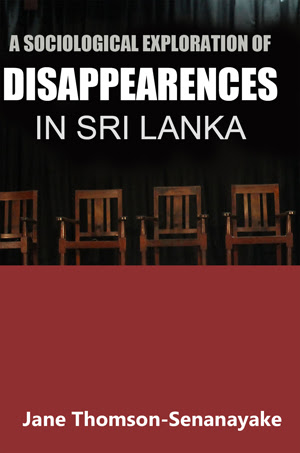 Thomson-Senanayake’s study explores these historical fault-lines through the manner in which disappearances served as an integral part of a system of state power and patronage during 1971-2002, ‘to enable the political elite to immobilise all political opposition.’ This is a reading of history which peels away the skin of ideological preoccupations and exposes the truth for what it is, simply a ruthless appropriation of ancient mistrusts and convenient mythologies to serve the political purposes of governments and oppositions.

Her crisp recollection of the dismantling of democratic systems, imploding from the 1970’s exemplifies how impunity is deeply imbedded in our history. The Southern insurgency of 1971 pitted Sinhalese youths against the State and gave rise to Sri Lanka’s first enforced disappearances, much before conflict exploded in the North and East between the Liberation Tigers of Tamil Eelam (LTTE) and the government. By that time, Sri Lanka’s systems had already commenced its ruinous slide into decay. Political tit for tat had crippled the public service and imperiled an independent judiciary. One illustration is the replacement of the traditional village headman system by politically appointed village level administrators (grama sevaka niladharis) in 1963. Thomson-Senanayake remarks that the ‘nationalist ideology of the ruling elite of which political violence was an outward manifestation’ conflicted with an ‘alternate ethos represented by the country’s rural youth’, Sinhala as well as Tamil. As she says consequentially, ‘disappearance served a national security imperative to nation building.’

Indeed, one may well question whether if Sri Lanka’s post-independence political leadership possessed any commitment to basic fundamentals of democracy, beyond a cynical bowing to labels and titles, unlike enlightened Indian constitutional reformists across the Palk Straits. As this study recapitulates, power was transferred at the turn of independence from colonial rule to a ‘Western educated, highly urbanized high class elite’ with the consequent absence of any genuine cultural or socio-political transformation. Gradual departures thereafter from the Rule of Law, the discarding of safeguards for the minorities carefully put into place by the departing colonial rulers in the Independence Constitution of 1948 were calculated and contrived.

But decades later, we still fail to interrogate many of these essential contradictions and perversities. The 1972 Constitution, in breaking with Sri Lanka’s colonial past, made its contempt for fundamental principles such as the independence of the judiciary and the public service very clear. Yet this Constitution is still referred to with a hint of pride by some as an ‘autochthonous’ (home-grown) constitutional document. Given the constitutional ravages that were perpetuated through this device, one may well question the very essence of this highly inappropriate boast.

However, such questioning remains rare. For example, the Sri Lanka Freedom Party coalition, which brought in the 1972 Constitution, comprised also Sri Lanka’s left parties. Recently, the birth and death anniversaries respectively of leftist greats N.M. Perera and Colvin R. de Silva were celebrated by their faithful adherents with much pomp. Yet the question as to what these ‘greats’ were doing when they were part of a constitutional process which started Sri Lanka on the long and painful road to a State ultimately bereft of the Rule of Law remains unanswered.

These departures from fixed and unwavering constitutional protections of rights in 1972 were only aggravated by Sri Lanka’s second Republican Constitution (1978, the present document). One can scarcely be surprised at this continuation of the subversive process. One can also scarcely be taken aback at the wholesale departure from constitutional governance evidenced by the post-war Rajapaksa Presidency, decades later. As we are reminded yet and yet again, one evil can only yield (in the absence of a miracle) to a greater evil.

Going beyond the ethnic dimensions

A further important focus of this thesis is its challenging of the ‘ethnic conflict construction of violence, which remains the official position on the conflict with the LTTE, by recognising it in the contexts of the political elite and their manipulation of political constituencies, particularly middle class fear and anxiety.’ This is the most recent in a growing body of work which urges a re-conceptualization of what is commonly termed as Sri Lanka’s accountability problem rather than as limited to a narrow ethnic prism. For decades, this approach on the part of the international community, including some international non-governmental organizations, had stultified the proper understanding of the country’s historic culture of impunity. Unfortunately, attempts to frame the discussions on a more inclusive basis have only led to thinly veiled accusations that these arguments downplay the specificity of Tamil grievances.

Even more damagingly, radical Tamil nationalists have used the conceptualization of the Sinhala-Buddhist ‘hegemonic State’ (a term burrowed from other historical contexts to which it is perhaps far better suited) to contend that nation building need not concern the Tamil people whose sole focus should be on the building up of the Tamil nationalist identity. These arguments are buttressed by selective quotation of the blindness of some ‘educated’ Sinhalese towards what the Tamils have suffered. And most un-forgivingly, debates on individual liberties are confined to atrocities occurring against the Tamil minority, ignoring extensively researched data on the pitiless reach of the national security state against all communities.

In unnerving respects, these arguments only reflect sentiments of Sinhala nationalists and the xenophobic ethos of Sri Lanka’s post-war political leadership. Caught between these two unhappy extremities, there appears to be little hope for a discussion informed by moderation and compromise. And ironically, this skewed rationale has only helped Sri Lanka’s majoritarian governments to avoid an inconvenient problem of overarching state impunity.

One challenge to this unhealthy dichotomy came from none other than a somewhat unexpected source, namely the 2011 report of the Lessons Learnt and Reconciliation Commission (LLRC). Its focus on Sri Lanka’s post-war crisis of the Rule of Law rattled the political leadership and to some extent, transformed local debates from sound and fury over which was bloodier, the LTTE or the Sri Lankan State to a far more constructive engagement with national institutions and processes benefitting the majority and the minorities.

In that regard, Thomson-Senanayake’s study is useful for the broader approach that it adopts. The dominant theme of her exploration is about the human pain of the Sinhalese, Tamils and Muslims who have been the primary targets of the State. Crucially, as yet another point of imperative introspection, the examination is also about the political project of the survivors of political violence themselves, from the North to the South, of the exploitation of this project by the political elite and its ultimate – some would fittingly term it, inevitable – failure.

The co-opting of the Southern Mothers Front in the eighties by an upcoming opposition parliamentarian Mahinda Rajapaksa (later to become the President of Sri Lanka in a vastly changed country) is just one apt illustration of the same. And as she says, ‘by achieving two primary objectives—rendering individuals permanently silent and neutralising social mobilisation against the state—disappearance enabled the ruling elite to manipulate local grievances and tensions which led to greater violence in the permanent removal of local enemies and rivals while heightening mistrust.’

Certainly co-opting of voices of dissent occurred at other levels as well. Thomson-Senanyake’s thesis looks briefly at the failures of the law and of the legal systems. The institutionalization of political violence is themed to include the examination of the centralization of the Office of the Executive President and the overtaking of normal law by the emergency State. It also looks at the investigation and prosecution of disappearances, the failure of habeas corpus and the achievements/failures of the disappearances commissions.

This is a socio-political focus. Consequently the critique of the judiciary is understandably secondary. However as much as the politicization of civil society movements on disappearances is one of the most refreshing aspects to emerge from this analysis, it may be a useful effort for another time to look at the politicization of Sri Lanka’s legal elite in regard to the subversion of the judicial institution. This had serious consequential impact on the eventual decimation of the Supreme Court as an arbiter of the rights of the disappeared. The monstrous awakening of Sri Lanka’s national security state and its ruthless recourse to enforced disappearances took place through a process of slow evolution aimed at crippling the judicial institution. These abominations have now come to a full flowering in a rogue Sri Lankan state minimally cloaked in the form of democracy. Checks and balances on legislative and executive power have been decimated.

It must be recognized that the post-war crisis of nationhood which Sri Lanka is inflicted with, leading to an international inquiry on accountability, originates from the past. This is an inevitable reaping of seeds remorselessly sowed decades ago by Prime Ministers and Presidents who laid claim to the best traditions of education and presumed erudition, quite unlike the ruder leadership of today.

These are apt reflections at a time when public interventions are understandably but shortsightedly informed by coruscating anger at the great misdeeds of Sri Lanka’s post-war political leadership. Often, the easy way taken out is to look at pure regime change. Our own history tells us however that though regime change may be necessary, this is not a solution by itself and of itself.

For those of us intensely preoccupied as to why such an anguished fate has been visited upon the people of this beautiful but bloody land, this book will undoubtedly be useful in the critical insights that it brings to the discussions.

*The reviewer is a Sri Lanka based legal analyst and senior columnist. Her recent books include ‘Rule of Law in Decline’ (2009), ‘Still Seeking Justice’ (2010) and the ‘Judicial Mind in Sri Lanka’ (co-authored,2014).