By Frances HarrisonPresenter, Our World

As Commonwealth leaders prepare to meet at a summit in the Sri Lankan capital, Colombo, allegations of rape and torture by the Sri Lankan security forces have emerged, some of them occurring four years after the civil war ended.

“When the lady left and that man closed the door, I knew what was going to happen,” says Vasantha. “They raped me.”

One evening earlier this year, Vasantha says, she was going back to her home in northern Sri Lanka when a white van drew up and two men asked for her identity card.

She says she was thrown into the back of the vehicle and blindfolded. 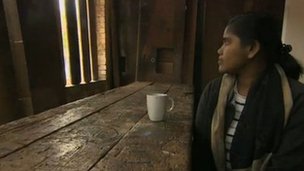 Vasantha says she realised the authorities had finally caught up with her, four years after the war and just as she was about to leave for Britain on a student visa.

Her story is one of a number given to the BBC, horrific accounts of torture carried out long after hostilities ended.

During the civil war, Vasantha had helped Tamil Tiger rebels pass messages and set up safe houses in the capital, but she says she never took part in the fighting or held a gun.

Like other women I have interviewed, Vasantha never saw the outside of the building where she was held or met another detainee, but she said she did hear female voices, screaming in Tamil.

She describes being photographed and fingerprinted and then kicked, beaten with batons and pipes, burned with hot wires and cigarettes, submerged in a barrel of water until she thought she would drown, suffocated by having a petrol-soaked plastic bag put over her head, before being repeatedly raped by men in army uniform.

She says she signed a confession in a language she could not understand – Sinhala – but the torture and rape went on for 20 days before a relative could find her and pay a bribe for her release.

For the last three days, she remembers her skin itching terribly in a filthy cell as she was kept completely naked. 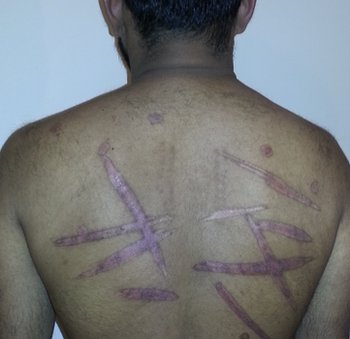 This Tamil man says he was branded during a torture session

“On the last day, at about two in the morning, three people came and they blindfolded me again and handcuffed me. At that moment I thought they were going to kill me,” she recalls.

Vasantha has a medical report from an independent expert who corroborates her story of rape and torture, as well as documents to show her family reported her disappearance to Sri Lanka’s Human Rights Commission at the time.

She has recently been granted asylum in the UK on the basis of her story.

Vasantha is one of 12 men and women who say they were raped by the Sri Lankan security forces in detention this year – one as recently as August.

The Sri Lankan government says it does not tolerate torture and the military says there were only five incidents of sexual violence involving soldiers in the north of the island from 2007 to 2012.

But a Human Rights Watch report documented 62 cases of sexual violence involving the security forces after the end of the civil war in Sri Lanka and said their evidence strongly suggested the abuse was widespread and systematic.

The UK charity Freedom from Torture has examined 120 incidents that took place after the war in Sri Lanka, while two British doctors from the charity Medact have seen more than 60 cases of Sri Lankans branded on their bodies with hot metal rods since the war ended.

“There is such a systematic set-up in Sri Lanka, whereby it’s absolutely clear to me… that detention and torture is going on in a very large scale and that it’s done in a very similar way every time,” says Dr Alison Callaway, an NHS doctor from Coventry who has written 200 independent assessments for the Home Office of alleged torture cases from Sri Lanka in the past five years.

“It must be assumed that it’s the deterrent effect that they will never again be able to have the strength or the purpose to want to fight against the Sri Lankan government or undertake underground activities against them because the terror and the distress and the trauma has been so great,” she concludes.

A BBC investigation also found seven Tamil men who allege they were tortured in the Sri Lankan government’s official rehabilitation programme for suspected former rebels. Four have documentation to show they were rehabilitated as well as medical reports corroborating their allegations of torture.

Organisations such as the International Commission of Jurists and two United Nations reports have said the Sri Lankan rehabilitation programme failed to meet international standards and warned of the possibility of torture, but this is the first testimony from survivors. 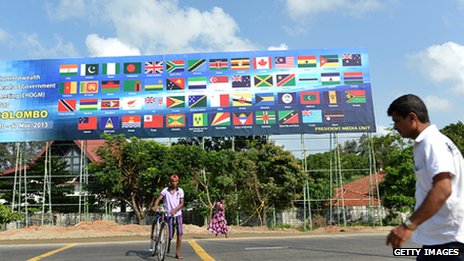 The Sri Lankan Ministry of Defence says it had “a world-class terrorist rehabilitation programme” that offered healthcare, education, vocational training and facilities for sports, meditation and entertainment to former Tamil Tiger rebels.

This was not the experience of Ravi, who says he was forced to join the rebels for the last six months of the war but then spent four years in rehabilitation being tortured in all the places he was detained.

“They would put my testicles in the drawer and slam the drawer shut. Sometimes I became unconscious. Then they would bring someone and force me to have oral sex with him. Sometimes if we lost consciousness during the torture they would urinate on us,” he says.

A leading British lawyer examined the evidence of continuing torture and rape gathered by the BBC along with other documentation from the United Nations and human rights groups.

Kirsty Brimelow QC says: “It all equates to a crime against humanity and therefore in cases like this, normally you’d be looking at them being referred to the international criminal court for further investigation.” 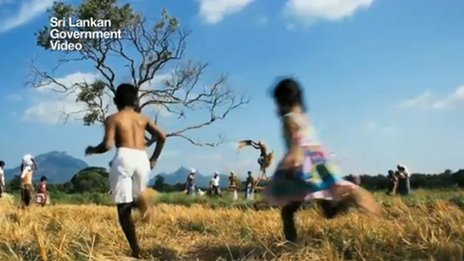 The Sri Lankan High Commission in London said: “Allegations of systematic abuse are a travesty of the truth for they suggest that this is the policy of the Sri Lankan government. It is certainly not so.”

They said it was not fair to expect them to respond fully to allegations contained in anonymous testimony.

Their written statement suggested the people who spoke to the BBC could have been paid to discredit Sri Lanka or even tortured by the Tamil Tigers themselves.

The names of Vasantha, Ravi and Nandini have been changed to protect their identities.