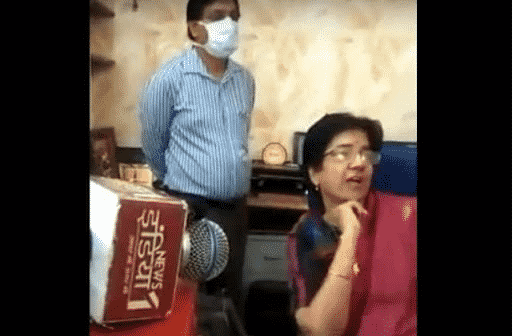 On 31st May 2020, Dr. Aarti Lalchandani the Medical officer of the Govt Hospital (Medical College Kanpur, UP) was caught on camera making derogatory, hateful statements that were intended to vilify and dehumanise the Muslim community by falsely attributing the Covid19 pandemic to them. The doctor was candidly caught saying “We are exhausting our resources on Jaamatis. Paying their hotel bills that run in lakhs. If it was not for them then there would be no cases. We are using 100 kits on them a day. If they weren’t there we wouldn’t need the kits at all.” On being asked “what should be done with the Jamaatis”, she responds stating “Please don’t leak this – They should be put in jails. The medicines are being wasted on them. More than the medicines the kits are being wasted on them. With the use of sticks they should be put in solitary confinement instead we are putting them in quarantine. There should be an order passed stating no resources should be wasted on the Jaamatis. They should be put in jungles in dungeons. They are terrorists. They are the reason for the spread. They will be the reason for the financial emergency.”[1]

At a time when the world is battling the spread of coronavirus which has been recognized as a pandemic by the WHO, viewing patients from the lens of religion by a doctor to determine who should be given treatment is criminal. The coronavirus has taken lives of 6075 persons in India[2] and such statements are fueling another communal virus pandemic. This pandemic calls for a responsive health system that will rise to the occasion to control the spread of the infection and to ensure that people receive adequate, comprehensive and ethical healthcare. This includes treatment, diagnosis, preventive efforts and counselling that is inclusive and non-discriminatory. In light of the critical times, healthcare workers have a heightened responsibility towards the patients and society at large. In such difficult circumstances the comments of Dr Aarti Lalchandani’s are unacceptable and irresponsible violating medical ethics and humanitarian principles.[3]

By making statements such as throwing the Jamaatis in the dungeons, solitary confinement, use of stick to put them in jail, the doctor is advocating for torture, inflicting of both mental and physical trauma which is in violation of Human Rights.[4] Furthermore, such action by a doctor in a government hospital that is required to provide care and treatment to all citizens, is criminal in nature specifically when the Government has issued statements of ensuring no stigma against the victims of corona. Calling the Jamaatis as terrorists is baseless, propagating enmity on religious grounds and in violation of Section 153A. Additionally, the doctor is in clear violation of Sec 188 of the Indian Penal Code as the doctor has ignored the directions of public officials to not stigmatise victims of the virus. Being in a position of power as the principal of a Government hospital, this discriminatory mindset can trickle down to the rest of the staff and also lead to overt and covert exclusion of Muslim patients who have as much of a right to healthcare as other citizens. We have observed this with other medical conditions like HIV, tuberculosis, leprosy etc., that targeting and stigmatizing communities leads to lesser reporting and prevents good public health interventions to control the spread of disease.

We vehemently condemn the statements made by her. They are unprofessional, uncouth, derogatory, divisive and in violation of the tenets of equality propounded in our Constitution. We demand that she be dismissed from services as she is a danger to the patients. Further, we demand the Medical Council of India to take cognizance of this matter and initiate disciplinary proceedings against her. There is also an urgent need for the Medical council, the Nursing council and all other allied professional bodies putting out strong statements against any form of discrimination, stigmatisation, negligence, denial of care based on the religion, caste, gender, occupation or geographical location of patients. We also demand that the medical fraternity condemn this action in order to restore the faith of the common man in the doctors.

[1] Video can be found at https://youtu.be/zvDvF-Ck7sE, reported by NDTV at https://www.ndtv.com/india-news/coronavirus-on-camera-up-doctors-hate-rant-against-islamic-sect-members-2238882, reported by The Hindu at https://www.thehindu.com/news/national/other-states/kanpur-medical-college-principal-allegedly-says-jamaat-members-are-terrorists-should-be-placed-in-solitary-confinement/article31719553.ece, fact checked by Alt News at https://www.altnews.in/verification-speech-targeting-muslim-community-by-kanpur-medical-college-principal/?utm_source=website&utm_medium=social-media&utm_campaign=newpost

[2] The number is underreported.

[3] B. Duty and Responsibility of physician in general, 1.1.2 of the Code of Medical Ethics Regulation 2002