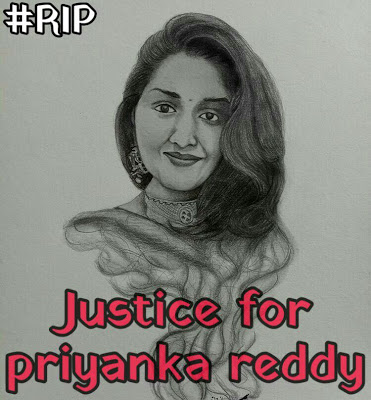 Statement Issued by: The Network: TUFH and Women and Health Together for the Future

We, the undersigned medical students, health professionals, academics, activists, and progressive groups around the world, are outraged by the rape and murder of Veterinary Doctor Priyanka Reddy from Telangana, India.

1 We strongly demand that justice is done in this and all other cases of sexual violence and the perpetrators are punished. This incident is not an isolated one with shockingly similar crimes occurring in many other countries2 and sexual assault occurring with frightening regularity in India. Adivasi and Dalit women and those working in the unorganized sector, women with disabilities, trans people, and sex workers are especially targeted with impunity – it is well known that the complaints of sexual assault they file are simply disregarded.

According to WHO3, “Health workers are at high risk of violence all over the world. Between 8% and 38% of health workers suffer physical violence at some point in their careers. Many more are threatened or exposed to verbal aggression. Violence against health workers is unacceptable. It has not only a negative impact on the psychological and physical well-being of health-care staff, but also affects their job motivation. As a consequence, this violence compromises the quality of care and puts health-care provision at risk. It also leads to immense financial loss in the health sector.”

We urge that the wheels of justice turn not only to incidents such as the Priyanka Reddy Case but to the epidemic of sexual violence that threatens all of us. We need to evolve punishments that act as true deterrents to the very large number of men who commit these crimes.

Our stance is not anti-punishment but against the State executing the death penalty. The fact that cases of rape have a conviction rate of as low as 25% shows that perpetrators of sexual violence enjoy a high degree of impunity, including being freed of charges.

Why Death Penalty is not a deterrent:

“There isn’t any evidence4 suggesting that the death penalty acts as a deterrent to rape. Available data shows that there is a low rate of conviction in rape cases and a strong possibility that the death penalty would lower this conviction rate even… ..further as it is awarded only under the ‘rarest of rare’ circumstances. The most important factor that can act as a deterrent is the certainty of punishment, rather than the severity of its form. As seen in countries like the US, men from minority communities make up a disproportionate number of death row inmates. In the context of India, a review of crimes that warrant capital punishment reveals the discriminatory way in which such laws are selectively and arbitrarily applied to disadvantaged communities, religious and ethnic minorities. This is a real and major concern, as the possibility of differential consequences for the same crime is injustice in itself. The logic of awarding death penalty to rapists is based on the belief that rape is a fate worse than death. Patriarchal notions of ‘honour’ lead us to believe that rape is the worst thing that can happen to a woman. There is a need to strongly challenge this stereotype of the ‘destroyed’ woman who loses her honour and who has no place in society after she’s been sexually assaulted. We believe that rape is tool of patriarchy, an act of violence, and has nothing to do with morality, character or behaviour.”

We reject voices that are ready to imprison and control women and girls under the garb of ‘safety’, instead of ensuring their freedom as equal participants in society and their right to a life free of perpetual threats of sexual assault, both inside and outside their homes. In the case of India, we are horrified to know that the Indian Parliamentarians are debating punishment for rapists from chemical castration to lynching. The popular demand for castration relies on a logic of emasculation that actually re-centers “good,” protectionist masculinity as the way to creating a safer environment in our communities. The enormously reductive understanding of rape as a penis-driven crime fixes responsibility on individuals and prioritizes biological motivations while obscuring the social, cultural and political structures that enable rape.

Justice meted by the State cannot bypass complex socio-political questions of violence against women by punishing rapists by death. The death penalty is often used to distract attention away from the real issue – it changes nothing but becomes a tool in the hands of the State to further exert its power over its citizens.

States need to address the many systematic and policy changes are required to end the widespread and daily culture of rape. States needs to start with adopting and implementing the WHO, ILO, ICN and PSI Framework5 guidelines for addressing workplace violence in the health sector. India and all countries need justice, not the bloodlust of mobs.

We need leaders who will work towards changing repressive systems, not politicians rushing us into a mobocracy.

IF YOU WOULD LIEK TO ENDORSE

#MaritalRape and the Indian legal scenario #mustshare #Vaw
#India- Warning - UID will create a digital caste System #Aadhaar #Aadhar
Censor Board Should Not 'Use Scissors' On Any Film: Shyam Benegal Panel
India-Pakistan Border Firing Tapers Off, But Diplomatic Tempers Continue to Flare