Students are being treated as customers: JNUSU president Aishe Ghosh on fee-hike protests 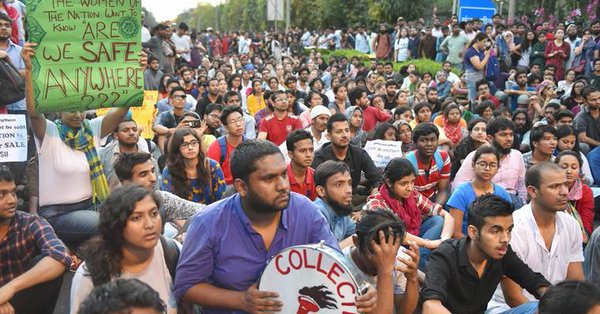 Aishe Ghosh, the president of the JNU Students Union and an MPhil student at the university’s School of International Relations, has been at the forefront of the protests against the proposal to massively hike the university’s hostel fee. SHAHID TANTRAY FOR THE CARAVAN

On 3 October, the Jawaharlal Nehru University issued a circular proposing a new Inter-Hall Administration manual to govern the institute’s hostels. The IHA is a body that administers 18 hostels of JNU, and on that day, the new draft manual was uploaded on the university website. The proposed changes to the hostel rules became most controversial for a revised fee structure with massive hikes. For nearly a month now, the university’s student community has been protesting the new draft manual, ultimately forcing the administration to partially roll back the proposal.Aishe Ghosh, the president of the JNU Students Union and an MPhil student at the university’s School of International Relations, has been at the forefront of these protests. In a conversation with Appu Ajith, an editorial assistant at The Caravan, in late November, Ghosh explained why these protests had found support from unexpected corners. She narrated the students’ union’s struggle against the proposal, the attitude of the university’s vice chancellor, Mamidala Jagadesh Kumar, and the larger implications of the fee hike for public education in India.

The JNU administration’s circular called for JNU’s student community to send suggestions to the office of the dean of students. We, being JNUSU representatives, read the manual and there were quite problematic things—students should be “appropriately dressed” when they come to the dining hall; the curfew timing will be 11.00 pm or half an hour after the library-closing time, whichever is later. Then we saw the whole section of the fee structure and reservation allocation is not there in the new manual. So, there was uproar and anger.

Generally, whenever a protest has to happen in JNU, the students’ union spreads awareness—it talks to people and tell them why the protest is happening. But for this, we did not have to do much. Whenever I went out, students themselves asked, “What is the JNUSU planning? We can’t simply accept this.” We said that the dean of the students has asked us for suggestions, let’s do that constructively. Obviously, the administration does not really care, but still, we thought, in a positive manner, let us give suggestions.

We prepared a draft letter and told students that if they agreed with our points—about the draft being problematic and wanting its proper roll back—they should also email it to the dean of the students. By my estimate, most of the three thousand students who were on campus dropped the email. We thought that the administration—knowing that JNU is political—would not go forward with it.

The campus was charged up by 18 October. At 3 pm that day, there was supposed to be a meeting to discuss the draft. The hostel presidents had been called for it, but not the JNUSU. The administration gauged that the students were angry about this too. They postponed the meeting to 10 am on 28 October. They were clever—it might not look like that to other people, but we have seen how things worked in past four years. At 10 am, a day after Diwali, hardly ten people would come for a protest. It was really hopeless. If the draft passed the IHA meeting without any dissent, the situation would have been out of our hands. We thought let’s try our level best in the next ten days. We did meetings after meetings. By our estimate, at least a thousand students would be there on campus during that time, we had to bring them.

On the morning of 28 October, when I reached the Convention Centre, it had already convened. But not everyone who was invited to attend the meeting had reached. We blocked two gates of the centre to stop more people from going in. We had circulated WhatsApp messages, which created a panic that JNUSU has not been allowed inside and the meeting is happening. We managed to get inside to the meeting. We told the attendees that this meeting can’t happen without JNUSU—as long as JNUSU is present in this campus, closed-door meetings like this are not going to happen.

By then, around six-hundred students had gathered to protest. At 2.50 pm, the hostel presidents received an email saying that the meeting was adjourned in the morning to 3 pm. Some hostel presidents could not attend it because of such a short notice.

We went on a strike from that day. Only some schools have had some academic functioning after that. We had general-body meetings at the hostel level. All this happened, but the vice chancellor was still not meeting us. He never engages. A kind of vice chancellor who is politically motivated, just listens to his political masters, not his students.

If the vice chancellor is not listening, we thought, we could go for our convocation—which was happening in Delhi’s Vasant Kunj area at 9.30 am, on 11 November—and meet him there. We decided to march. The students were quite energised—we broke four barricades on the way. We gheraoed that place—we did not want to, but we had to. We could not meet the vice chancellor. But the office bearers were allowed to meet Ramesh Pokhriyal, the union minister of human resource development, who was present at the venue.

To disperse the crowd, the police lathi charged the students and used water cannons too. Many students ended up with broken hands and feet that day. As their representatives, we were really disheartened. We wondered if the students would want to join protests ever again.

After that, we took a couple of days off. We needed to build hope. Again, we started from the ground to mobilise the students. We planned a march to the parliament on 18 November and told the police that it will be a peaceful march. Many protestors were detained that day. They picked me up, too, as if that would stop the students from moving further. But the students showed courage, they found out another way. They marched on.

After we reached Delhi’s Jor Bagh area that day, the police brutally lathi charged the students. Police personnel literally stepped on the chest of a visually-challenged student, Shashi Bhushan Pandey, with their boots on. It was a really unfortunate and dark incident. We have never faced this—students being beaten up to this degree. The MHRD announcedthat they will partially roll back the hike for students who fall in the below-poverty-line category, but that does not change much.

But why were the students doing this? Some components of the fee were hiked by a thousand percentage. I am not scared of saying that when it was formed in 1969, JNU was one of the most elitist universities. Students who used to come here were predominantly from the elite colleges of Delhi University—Miranda House, Lady Shri Ram College, St Stephens, et cetera. That percentage has reduced today—that is what the JNU students back then wanted to do.

The student community pondered about what could make JNU represent India? This paved the way for JNU’s deprivation-points model, under which students coming from backward regions of the country and women were given additional marks in their entrance exams. Now, even students from Odisha’s Kalahandi region, which is considered one of the most backward in the country, get their PhDs from JNU. That is what we are trying to protect—the idea of public education itself.

But the vice chancellor wants to turn it back into an elitist university. The government is saying that they want to give better facilities to JNU. We understand that. But to provide the better facilities, why do you need to take money from students? Till now, JNU has been giving best facilities, without meddling with the fees structure to this degree. If you want to provide, you should not ask money from me. My father is already paying tax for my education. Secondly, in India, if we are talking about how we can make things better, let us instead talk about how education can be made free of cost. Let us convene on this point rather than discussing that institutes should take loans and then take that money back from students.

As a JNU student, at this moment, every semester we pay an establishment fee of Rs 1,100 already. Along with it, we pay crockery charges, utensil charges and newspaper charges. We all pay for all these things. Along with this, every month, we pay mess bill of Rs 2,500–3,000.

If the fee hike happened in accordance with the initial proposal, every month, the amount can be around Rs 6,000 or 7,000 or even more. We would have to pay a higher amount to the institute on a monthly basis, along with service charges. The service charges would be to pay the people who work in our hostels, contractual workers. The rent for our rooms, which is Rs 10 per person, would increase to Rs 300.

Along with it, we will have to pay utility charges for drinking water, electricity, Wi-Fi for buying academic articles, et cetera. The imposition of utility charges shows that you are treating us as consumers, not as students. We are being treated as customers—it is exactly what is wrong with the idea of private education.

We are here to study. We are supposed to get Wi-Fi to access articles. We are supposed to have safe and clean drinking water. The university should provide these things. It is like how in a school, students should have clean toilets. They should not have to pay for it. Tomorrow, the administration might say that you have well-furnished toilets with jet sprays—so every time you use the washroom, you have to pay Rs 50. What is this? You are treating us as customers.

The taxpayer’s money should be utilised in things like education. But taxpayer’s money is used to build a statue worth Rs 3,000 crores. Nirav Modi ran away from the country and nobody is making him accountable. If this money had been spent on the India’s education and healthcare, India would have been in a much better situation in comparisons to other south Asian countries. Tax is taken from the public to utilise that money for the public. That is not happening. It is being only utilised for certain tycoons and capitalist people.

I have got more than thirty notices till now to show up for the proctor’s inquiry—“You have violated this and that”; “You have protested here, you have protested there.” They have painted it as a law and order situation rather than a protest.

This time, I do not think the Bharatiya Janata Party has been succeeding in their crusade to label us as anti-nationals. They have time and again tried to shut down the JNU campus. Consequently, every time people hear of JNU protests, they think that we are fighting about something wrong. But somewhere, this time, we have reached out to a group beyond our usual supporters.

Even the Akhil Bharatiya Vidyarthi Parishad has been engaging with the movement. But they have their own ways of engaging in protests. They also asked for the resignation of the MHRD minister as he is failing to discharge his responsibilities. But everybody is united on the fact that the rollback should happen immediately and that there should be no fee hike.

A lot of people have showed their solidarity with us. At the end of the day, this is about education. JNU also has students whose family members are from the BJP families. Some of them have said that even their families are quite sympathetic to this issue. Education is equal for rich poor and everyone. And that empowers.