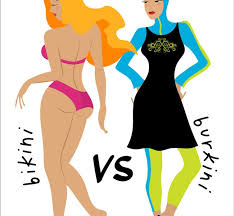 Charlie Hebdo, yes that French satirical magazine which was attacked by Islamist terrorists for publishing a cartoon showing the Prophet Muhammad, has been on overdrive lately lampooning the decision of a few French towns to ban the burkini from their beaches. A French court has declared any such ban unconstitutional but the controversy over women’s beachwear rages on.By now most of us know what a burkini is. It isn’t a burkha nor is it a bikini.It’s a swimsuit created by an Australian designer for Muslim women who would like to go to the beach but wouldn’t like to expose as much of their body to the public eye as a bikini would.

The French municipal bodies that have banned the burkini from their beaches have declared the outfit to offend French culture, to symbolise the subjugation of women, and maybe even pose a threat to public safety . We could argue reasonably that certain styles of the bikini, which expose nearly all of the female body , can be a potential threat to public order on beaches where there are drunken or otherwise unruly men around. Mais non, burkinis are simply not French. Purists of French culture argue that such austere and overtly religious dressing goes against the French version of secularism or laicite, which requires a strict separation of church and state.

Really? One cartoon in Charlie Hebdo shows a scene on a beach in 1966: A couple of cops are ordering a topless woman to cover up; the next panel is in 2016, the same cops are asking a burkini clad woman to take it off. Austerity is often in the eyes of the beholder as well as in the mores of the times. French law, however, continues to dictate what a woman can or can’t wear.

Would the secular-moral police stop a Catholic nun in a habit from visiting a beach in Nice, where the burkini is forbidden? Unlikely . Or, why does secular France officially grant so many Christian holidays in a year while in secular United States Christmas is the only national holiday to mark a religious occasion? Laicite, it seems, can be selective. France during its Revolution in the late 18th century originated secularism as a constitutional feature in a nation-state. The founders of the US, Thomas Jefferson in particular, were influenced by French ideas; and the US became a constitutionally secular nation in 1791. The ideas came from groundbreaking French thinkers, Voltaire prominent among them.

Voltaire advocated three principles for society: freedom of religion, freedom of expression and separation of church and state. Among his numerous essays was a Treatise on Tolerance in which he asked: “There are about 40 millions of inhabitants in Europe who are not members of the Church of Rome. Should we say to every one of those `Sir, since you are infallibly damned I shall neither eat, converse, nor have any connection with you?’“ Laicite was born of such ideas.

Radical ideas like keeping religion out of public life didn’t strike Voltaire overnight. In fact, he was prudent in expressing views on religion. But he edited and arranged to publish the writings of an obscure but extraordinary 17th century parish priest called Jean Meslier, who was an outright though surreptitious atheist in priest’s clothing. Voltaire redacted Meslier’s atheist views.

Influenced he was, however, by Meslier’s writings enough to publish them posthumously in edited form. Messlier had nothing but contempt for Christian sanctimony . His diatribes against manipulative religion and the sheer injustice in exploitative societies influenced many radical thinkers in the 18th and 19th centuries. His writings are now available in an English translation in a 2009 book, Testament. Meslier was a grandparent of laicite. Neither he nor Voltaire would probably approve of laicite as it’s rigidly defined today .

In Indian secularism, anything goes. If your religious group has a demand, just rally up some public disruption and the government will soon bend to your will. But that’s another story .