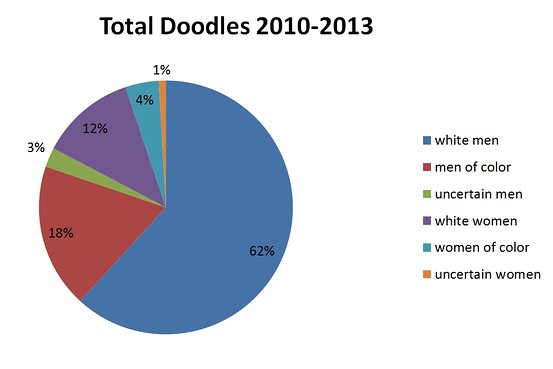 All four are in the elite club of public figures who’ve been honored with a GoogleGOOG -0.29% doodle, the quirky tributes that surround the Google search bar.

They’re also all men. And in the midst of criticism of sexism in Silicon Valley, Google’s idiosyncratic list of doodle honorees is coming under fire for overlooking women’s contributions to world history.

On Thursday morning, SPARK Movement, a girls’ advocacy group, released a report that tallies the gender ratio in four years worth of data on Google doodles. Of the 445 doodles published on Google homepages worldwide between 2010 and 2013 that celebrated individuals, 82.5% featured men, and just 17.5% featured women, according to the analysis. (The data only include human historic figures, so fictional characters that have been honored with doodles, such as Wilma Flintstone and Pac-Man, weren’t factored into the tally.) The report also counted women of color in doodles, and found they represented just 4% of doodles over the past four years.

“Google is the information center of the world, and it’s presenting a skewed and imbalanced vision of who creates knowledge,” says Dana Edell, executive director of SPARK Movement, an organization that fights negative representations of girls in the media. “It’s telling girls and boys that the people who have made a contributions to our world are white men.”

Germick said the company is hoping to have women and men equally represented in doodles in the coming year, and said it has made significant strides in the first two months of 2014. “So far this year we’ve done doodles for as many women as men, a big shift from figures below 20% in past years,” he said.

On Thursday morning, Spark will unleash a digital campaign to make sure Google follows through, including a petition on change.org, and a social media campaign organized around the hashtag #doodleus, calling on Google to address the gender balance. The campaign will also include a Tumblr page featuring a “list of awesome people” that Google should consider honoring with doodles, such as Nina Simone, Indira Gandhi and Christine Jorgensen, a transgender actress.

The campaign comes as Silicon Valley tech companies have been increasingly criticized for their poor records on hiring and promoting women. Facebook COO Sheryl Sandberg brought renewed attention to the issue with her book “Lean In,” and other recent reports have added to the outcry.

Twitter’s IPO filing, for example, revealed that all of the company’s board members, as well as its top executives, were all male at the time of IPO, with the exception of one lawyer. A recent study by the tech law firm Fenwick & West found that 11.5% of top executives in top publicly traded Silicon Valley firms are women, lagging behind the rest of corporate America.

Google’s search page is one of the most trafficked websites in the world, and its search bar fields over 100 billion queries a month from 181 countries

“It’s the global town center,” says SPARK’s Edell. “And when we look at whose stories are told in public spaces—from statues in public parks to the Google homepage– it tells us who is important in the world.”

By paying public tribute to historic figures, Google doodles have drawn comparison to postage stamps. But the Postal Service has a stronger record on promoting diversity than Google, typically achieving a 50/50 male to female ratio in the 20 stamps it releases each year. It wasn’t until 2010 that Google celebrated a woman of color on its homepage, with an image of artist Frida Kahlo. The Postal Service honored Pocahontas with a stamp in 1907, followed by Harriett Tubman in 1978.

In recent weeks, there have been subtle signs that Google is getting bolder about promoting messages of diversity in doodles. In addition to the rising number of women that have surfaced in doodles, including African American author Zora Neale Hurston and zoologist Dian Fossey, Google published what may be its most political doodle ever on the first day of the Sochi Olympics. The doodle featured Olympic athletes emblazoned in a gay pride rainbow flag.

Google is not the first organization to be in the crosshairs of SPARK, an organization comprised of high school and college activists from five countries. The group’s past successes include taking Lego to task for failing to include female “Lego friends” in positions of power in its toy sets. (The group’s 2012 study showed 87% of Lego Friends appear to be men.) On the heels of SPARK’s campaign, Lego released a female aviator “friend.”

The girls behind the Spark study say they’re fans of Google doodles—and Google in general. (In fact, they used Google docs to compile and share their research showing gender bias in doodles.) “Google is part of pop culture, it’s our homepage, it’s a part of our daily lives,” says Mehar Gujral, a 17-year-old high school senior from New Jersey who was involved in the Spark campaign. “We just think that it could be better at representing everyone who visits the site, instead of just a select few.”

– Jane Spencer is one of the founders of The Daily Beast and a former WSJ reporter.