“That firing was something as if it was firing of India and Pakistan war” said Bhante Kashyap, reminiscently, one of the eye witnesses of Ramabai Nagar homicide of 1997, in the heartland locality of Mumbai, Ghatkopar East. Another narrator and also an eye witness of this arrogantly brutal massacre of Dalits in Ramabai Nagar, has depicted how thirteen years old boy had been shot dead by police’s bullet hitting his skull and splintered it in two pieces. Few more eye witnesses as well as victims, after seventeen years of the incidence have gathered courage to come up on the stage, provided by ‘Ramabai Nagar Hatyakand Sangharsh Samitee’ at their arranged conference at Ramabai Nagar, on the seventeenth anniversary of this incidence. 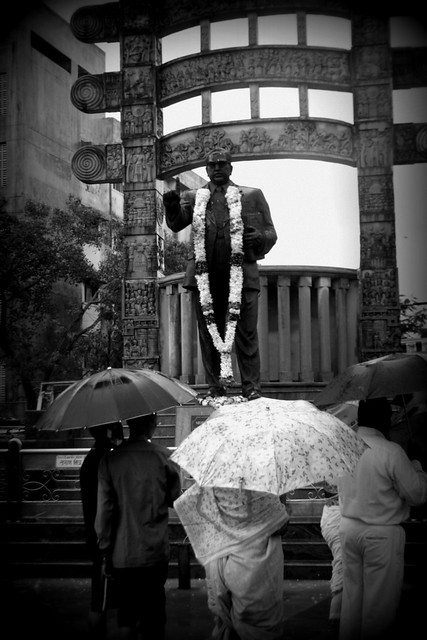 Newly built up Dr.Ambedkar’s statue in Ramabai Nagar
On the early morning hours of 11th July 1997, the predominantly Dalit locality of Mumbai, Ramabai Nagar, Ghatkopar East had witnessed the black day. The statute of Dr. Ambedkar was desecrated with garland of shoes and chappals. When peaceful protestors were gathered on the eastern express highway passing through Ramabai Nagar, the police arrived within fifteen minutes from nowhere. Manohar Kadam, a sub- inspector of the State Reserve Police Force (SRPF) ordered the firing which had taken place into the locality that, despite the fact that protestors were on the road, had led to the killings of eleven local residents, left twenty-six people injured and each of one of the locality humiliated with undelivered justice even after seventeen years. 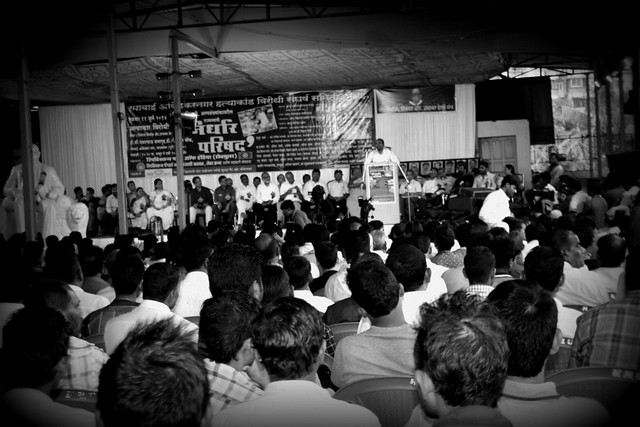 Crowd gathered at conference at Ramabai Nagar to reminiscence the 17th year of the incidence.
‘The Gundewar Commission report- the commission appointed to investigate the incidence- held Kadam responsible for “straightaway” opening fire without warning or even attempting to disperse the crowd through other means’. Manohar Kadam is still not arrested, despite being held guilty for firing and death of eleven innocent people, enjoying the pension of government for his public service. Eleven families have lost someone among them; most of the people who died were in their early twenties or thirties. Those who were injured went on with their lives. One of them is Milind Pagare, injured by the blast of teargas shells (expired at the time of use), who then was around seventeen years of age, now at thirty-four, is protesting blindfold, seeking justice for victims and the arrest of Manohar Kadam on his occasional fasts. 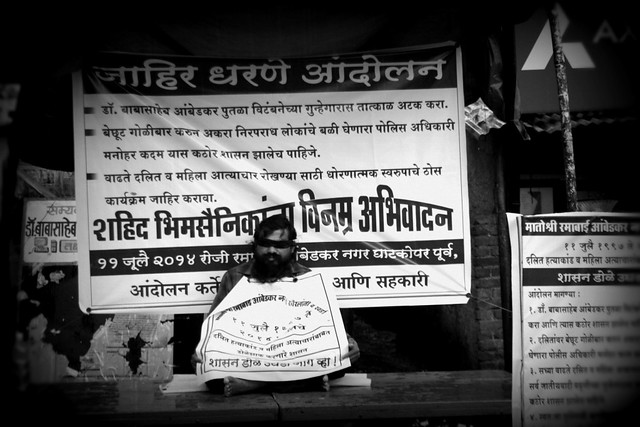 Milind Pagare, one of the victims of the massacre, fasting to seek justice on 11th July 2014
On the other hand, along with social transitions, political discourse of and by Dalits have been taken a huge leap. The Shivsena and BJP coalition, who then was governing Maharashtra, is again formed the government, this time with full majority in the centre. Meanwhile atrocities against Dalits have been unabated and often go unnoticed with no heedful recognition either by state or media. Ironically, infamous killings of Dalits in ‘Laxmanpure Bathe’ and ‘Bathali Tola’ offer an illusion to people about justice, with the curious acquittal of perpetrators. Khairlanji massacre of Dalit family in 2006, again in Maharashtra, only cemented the illusion of justice in atrocity cases against Dalits. Today, in Ramabai Nagar, the memory of the incidence is fresh and equally haunting. Meanwhile justice to the victims seems lost into the chaos and fusion of political reconstruction and allies into the Ramabai Nagar itself. 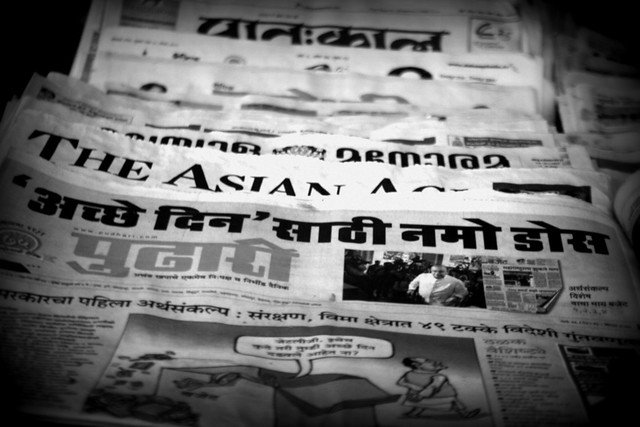 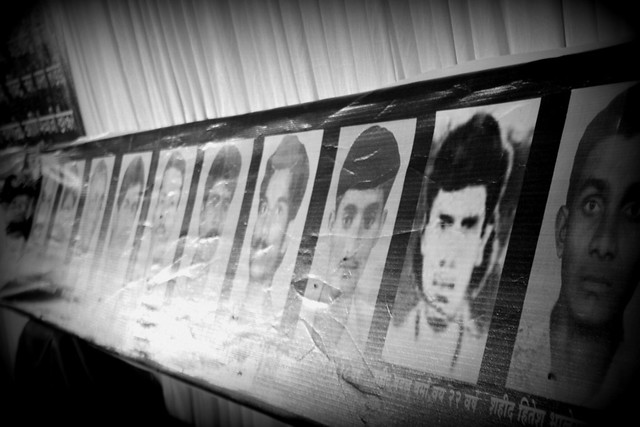 Flex photos of the 11 Dalits who were massacred on 11th July 1997
The perpetrator of desecration of the statue has never been found. Manohar Kadam, who had been was given life sentence by session court was succeeded to acquired bail from high court and had never been into jail custody whose un-imprisonment is, as Anand Teltumbde recalls, a rude shock for Dalits of Ramabai Nagar who are still waiting for justice, moreover hoping for it through their Morchas, Dharanas, fasts and into their conferences of defending human rights and dignity.

PRESS RELEASE- WESTSIDE’s Anti-disability, Anti-wheelchair Policy Continues
Patanjali appears in the list of companies polluting river Ganga
Once upon a time, when women were forced to bare it all #Vaw
Punjab - Minor Dalit girl raped by two brothers in Punjab #Vaw #WTFIndia