Usha Cunningham, who was diagnosed with poliomyelitis as a two-year-old in the 1940s, recounts the tale of how her mother led the charge against the disease.

IN 1942, a daughter was born to Fathema Ismail, the sister of cotton king and Congress financier Umar Sobhani, and Mohammad Hasham Ismail, a government of India trade commissioner posted in Mombasa. She was fondly named Usha — after the Goddess of dawn — in the expectation of a new dawn as the city and the country was immersed in the Quit India movement. Fathema Ismail was closely involved with Kulsum Sayani (the mother of Ameen Sayani) in women’s education and the establishment of All India Village Industries Association. When Usha turned three, the family discovered that she had polio.

“Amma was dejected with the news, but at the same time, she was determined to get the best treatment for me,” recalls Usha Cunningham, who is now based in New York. She recalls the turbulent years where India fought and finally achieved freedom from the British, which ran parallel to her own fight with polio. Patel Manzil at Nepean Sea Road, where Usha grew up, was a safe haven for underground activists. “Aruna khaala (Aruna Asaf Ali) and other leaders would live under assumed names in our house. My mother’s nationalist leanings were wellknown but as my father was a trade commissioner, we escaped scrutiny.”

In her search for a doctor, Fathema was referred to Dr M G Kini, an orthopaedic surgeon based in Madras. “Dr Kini was a crusty, old man who first declined to accept my case. Amma would sit outside his residence and accost him in the morning, afternoon and evening when he would travel between his house and clinic. He ultimately agreed and we stayed in Madras for eight months,” recalls Cunningham. Under Dr Kini’s guidance, Usha showed tremendous improvement. The Madras visit also marked the beginning of Fathema’s discovery about the lack of facilities for children afflicted with polio. Soon, her husband, Mohammad, was transferred to Iran from Mombasa, but she stayed in India.

After Madras, the next stop was Pune, where, Fathema had gathered, there were some facilities for rehabilitating injured soldiers at the British Army Hospital. “There were three British physiotherapists who would treat the injured soldiers with the help of a few trained Indian assistants. Amma requested similar training and after some reluctance, was allowed access,” remembers Cunningham. What worked in her favour was the fact that Fathema had gone to Vienna to study medicine in 1920 after finishing schooling, but had to return due to a financial crisis in the family. For three years, she had stayed alone in Vienna absorbed in her studies. Decades later, those three years of study helped facilitate a better understanding of the process of rehabilitation.

More than two years of treatment and therapy changed Cunningham’s life. From “totally paralysed”, she regained remarkable mobility in her right leg. Little did she know that she would soon become an exemplar of how patients with polio need not be confined within the walls of their house — ignored and neglected.

Fathema was now determined to start a facility for the countless polio-stricken children and their parents. Her experience and observation in Madras and Pune gave her the confidence to start a clinic in Bombay (as it was known then). But finding a suitable space amidst a financial crunch plus low awareness of the disease were formidable hurdles. She also had to ensure she had enough medical equipment. The war had ended and the imminent departure of the British meant that the Army hospital in Pune faced an uncertain future. In 1946, she had established the Society for the Rehabilitation of Crippled Children (SRCC) but despite her pleadings, the hospital was not willing to share or sell the equipment. She then convinced two of the Indian assistants to get the various equipment and kits transferred to Bombay while the hospital was winding up. “She promised them jobs and convinced them of the immense good this would do for the poor patients,” recalls Cunningham, the excitement in her voice palpable as she recounted her mother’s exploits.” Not many people know that six truckloads of machinery were taken out from Pune,” she says.

These surreptitiously transported kits formed the base for a polio clinic that was opened in May 1947 in the empty Chowpatti premises offered by Dr A V Baliga, who was going to the United States on a study tour. After few months the Bombay government gave space in the empty barracks at Marine Drive as the clinic’s immense popularity led to a waiting list. In the wake of Independence, Bombay and India, had woken up to the need of rehabilitating the differentlyabled. Medical journals and international aid organisations took note of Fathema Ismail’s enterprise. In 1951, she visited the United States on the state department’s invitation for a fourmonth tour of various hospitals, and the same year went to Europe to attend international conferences.

She was now determined to open a full-fledged hospital. “She caused quite a headache to Prime Minister Nehru as she demanded a plot near the race course at Haji Ali. It was a prime location and Nehru would say ‘Fati, why only that plot? I can request the Bombay government to give some other place’. But Amma was insistent. The racecourse was frequented by the rich and the famous and one of the reasons for the request was that she wanted larger society to be fully aware and responsive to the problem of polio.” The result was a children’s orthopaedic hospital, which opened in 1952 and was inaugurated by Nehru, which continues to operate to this day.

After roughly 30 surgeries and years of therapy, Cunningham who is now 75 years old, has no regrets. “I have climbed mountains, ran a business in Delhi, shifted to America, got married, have a caring husband and daughter. This is what Amma wanted. Similarly, she convinced several industrialists to offer training for the handicapped at her centres so that they could get employment.”

In 2011, India announced that it had eradicated polio, but the foundation stone for this incredible campaign was laid by a lady who had the grit and determination to envision a polio-free society over 70 years ago. 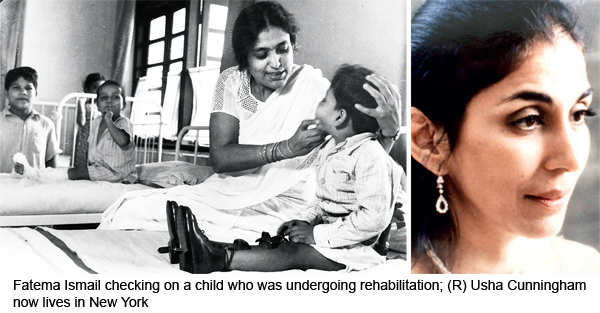 UP- 9-year-old girl raped and murdered in Etah #RapePublicofIndia
Tanushree Dutta, Who Accuses Nana Patekar Of Sexual Harassment, Says She Was Threatened, Car Was Att...
WhatsApp from Sardar Patel I am going to boycott the Program of 31 October 2018
Indian Writers step up protest, 1 quits Sahitya Akademi, 3 from Punjab return award