#Sundayreading – The Secret, Opaque Guild Of The Men Of Law #corruption #Vaw 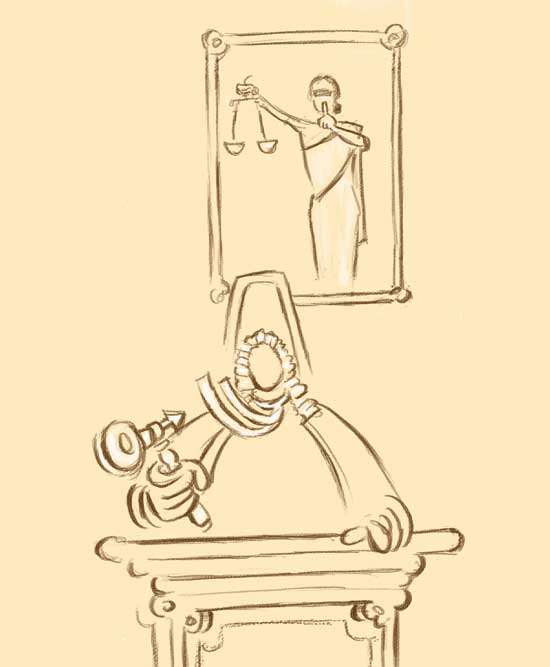 ILLUSTRATION BY SAAHIL
OPINION
Inbred corruption and gender discrimination are often intertwined in the Indian judiciary: indeed, corruption has been sexualised
INDIRA JAISING
I am particularly pleased that today we are witnessing two simultaneous debates. The first being on the appointment of judges to the high courts or the Supreme Court and the other on the sexual harassment of women interns, lawyers and even judges by members of the highest courts of the country, composed predominantly of males. The first debate is triggered by serious allegations of corruption in the judicial system and the unrepresentative character of its appointment structure. And the second one is induced by the male chauvinism and misogyny that prevails in large sections of the judiciary. I have long believed that there is a sexualisation of corruption in the judiciary sphere, one that exists almost freely at an underground level, unmentionable and unspeakable.

So what can be posited as common in the two debates? The impunity that judges enjoy clearly foments the pernicious structure of hierarchy within, the culture of sycophancy in the legal profession and the near-dynasty that exists in the matter of judges’ appointment. One look at some judges’ predecessors will convince you that they are not only from the same class or social background, but also related with ties of blood. At one time, the Supreme Court had three sitting judges related to each other, with not a single demand to figure out how they all managed to get there at the same time. The legal profession has also bec­ome hereditary; children of lawyers becoming lawyers and the children of these lawyers’ children also bound to bec­ome lawyers. It is almost as if law was a business. But unfortunately, it is a justice-dispensing mechanism. This creates countless conflicts of interest between members of the judiciary. In India, we definitely lack a conflict of inte­rest theory when it comes to public life; we are all brothers and sisters, uncles and aunts! I have seen lawyers who, when becoming judges, bequeathed their cases to their sons who were practising in the same courts!

So where does this take us on the question of sexual harassment by judges? How should we deal with it? Are we really seeing an epidemic of sexual harassment by judges on women interns, judges and lawyers? No, I don’t believe so. Just as all judges are not corrupt, all judges are not sexual predators. But the fact is that, given the hierarchical nature of the system, like the one we see in the armed forces, the system oppresses those at the bottom: women, who are subordinated on the basis of their gender, and other overlapping hierarchies that affect those who have no connections within the system and are only ap­po­inted on merit. The structure of the judiciary functions on the basis of favours and those who are willing to play the game are upwardly mobile. But those who are bright will remain at the bottom of the list or will be pushed out, just like the additional district judge of Gwalior.

My own observations on these cases are that those who are accused of sexual harassment usually have a long history of such behaviour; they have gotten away with it in the past and have been emboldened to continue. Until one day, a brave young woman comes and decides to go public. And, exc­use the pun, but when that happens, it is like the accused being caught with his pants down. All such incidents happen at the residence of the predator when his family is away, in the office be­­hind closed doors or in hotels. In all cases, the offender approaches the victim from the back and takes her by surprise. This is the description of the typical harassment case that I have seen in my career. I have yet to see a case in which there was no previous history of sexual harassment or misconduct.

In one reported case from Rajasthan, once again, the woman in question was a dist­rict judge and the alleged predator an administrative judge. He called her repeatedly in the guise of reporting for monitoring to his residence and when she went there, strongly against her wishes, she found him standing in his underpants. The case went all the way up to the high court. The outcome was predictable: she lost her job on the ground that her services were not found satisfactory. She was a Dalit woman.

So what ails the judiciary? It is not as if there is an epidemic of sexual harassment, but sweeping the few cases that happen under the carpet is the norm. The conspiracy of silence is the norm. We, lawyers and judges, live in a world of hypocrisy, in a world of denial. We continue to call each other ‘my learned friend’ and judges ‘My Lord’.

As the district judge who has been forced to resign says: “I appreciate and understand that in all organisations, while the select majority is good, hardworking, rule-bound and diligent, just a few people with a criminal-bent mind will hold the entire organisation to ransom. Rather than challenge these dodgy layers of society, which in any way should not be a part of it, the silent majority shuts its eyes at their misdemeanours, as they are prisoners of their own comfort preferring the status quo.”

She concludes: “As for me, I have indeed often kept these things only for myself, but I have also at other times chosen to stand up and let my voice be heard. Long years ago, I demanded an inquiry against judges of a particular high court who were allegedly ‘misbehaving’ with women lawyers and women judges from a subordinate court. These women judges were apparently being considered for a promotion. The inquiry was held, but the report was never made public. The outcome was predictable again; no action was taken against the judge in question. Then, I filed a petition in the Supreme Court for a copy of the report. I was not entitled to a copy.”

We can now ask ourselves the question: has anything changed since then? Yes, something has. The women are speaking up now. But the system does need to make their voices heard and to support them in the process if we want the sexual predators to be successfully weeded out.

This is the reason why the Commission for Judicial Appointments must announce in advance the names of the proposed appointees and make its proceedings open to the public.

We are in a crisis situation where some men are unable to accept women as human beings at the work place and continue to treat them as sex objects. It is indeed a shame that although the judiciary preaches transparency and accountability in all corners of the country, there exists no redressing mechanism within the judicial system itself.

In her words: “What kind of system are we all leading our welfare democracy towards? If this is how a mother, a sister and a wife are to be treated in India, then what constitutional goals are we actually defending?”

The Chief Justice of India has promised an inquiry, but stated no work should be assigned to her in the process. We say: her resignation must not be accepted and she must be restored to her rightful position.

Where is the Democracy in India?
Letter to 'You' From A Citizen: You Think With Murder You Can Silence Us, You Are Mistaken!
Press Release - Kerala Government accuses, Thejas Daily of being Anti national #FOE #mustread
Press Release - PESA and bauxite mining in Andhra Pradesh- HRF