The problem of male cattle in India, the world’s largest milk-producing country, remains in limbo even as farmers grapple with latest government regulations that severely restrict cattle trade and culling 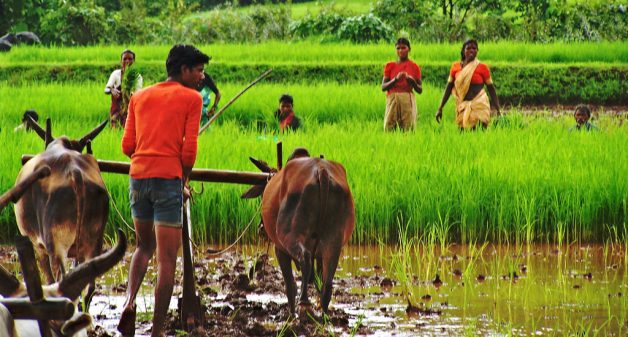 The use of bullocks for farming is decreasing in India. (Photo by Mallika Viegas)

Alpesh Patel, a small farmer in Mogari village of Anand district in Gujarat, owns three crossbreed female cattle and earns supplemental income by selling milk to the nearest dairy co-operative. He strives to keep his herd efficient for milk production by keeping only female cattle.

On being asked about this selective rearing, he said, “The survival rate of newborn male calves is very low and two out every four newborn male calves naturally die within six months. If they survive, they are sold to the local vaghri community for Rs 500-600 each, as these male calves have no economic utility when they grow up as adults.”

However, he says that female cattle have high survival rate vis-a-vis the males and almost all of them achieve adulthood. It is highly possible that what Alpesh claims as natural death could be selective weeding out of young male stock in order to keep his herd efficient for milk production. Is he the only farmer with such rationale? Livestock data from two decades unveil some interesting insights on this female bias of bovine-keepers in India.

Till the advent of Green Revolution in India, bullocks were an indispensable component of the nation’s agrarian society. They were revered by farmers and commanded higher priority over female cattle because of draught power. Things, however, changed after the Green Revolution, when the male started getting replaced by mechanized power — tractors, power tillers and diesel and electric pumps — in the agricultural fields.

The opportunity cost of rearing a male cattle became low as they have to be fed entire year for 60 days of traction services. They offered no additional benefits compared with the efficient and timesaving tractors, which led farmers to think of their disposal. Also, milk production gained importance over the years, which made farmers get rid of male cattle so that large share of feed and fodder resources remained concentrated on the milch cows.

Bovine-keepers dispose male cattle in several ways — through neglect, abandoning them so that they become strays and selling them off in the cattle market because there is demand for their meat, hide, bones and other by-products.

One-third of this net loss — about 10 million male heads —has occurred alone in the Hindu heartland of Uttar Pradesh. The composition of crossbred cattle population, where males comprise only 10% of total 40 million, clearly shows the selective and differential treatment of bovine-keepers towards bullocks. Economic rationality guides the decisions of dairy farmers in determining the size and sexes of their cattle herds. 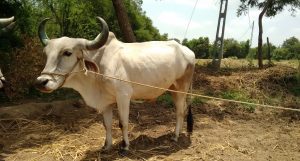 However, in the recent years, the issue of sacred cow has gained currency nationally, which has started to interfere with the established system of disposal of unproductive cattle. Incidents of violence and murder in the name of cattle vigilantism are on an all-time high. State machineries have also caught up to this rising frenzy. The Gujarat government recently passed a law that made cattle slaughter an offence punishable with a life term. The central government has recently made an amendment to the rules under the Prevention of Cruelty to Animals (PCAA) Act, 1960, which bans the trading of cattle for slaughter in animal markets across the country.

For Vipulbhai Patel, a commercial dairy farmer based in Bhetashi village of Anand district in Gujarat, disposal of male cattle has become extremely difficult in current circumstances. “Forty four out of 80 female cattle in the herd are expected to give calves this year,” he told VillageSquare.in. “If 50% of the forthcoming newborns are male, how would I get rid of these as there are no buyers in the market?”

If we take a close look at the Vipulbhai’s situation, the addition of around 10 male cattle in his herd — assuming that half of the male calves die within six months due to neglect — would have fetched him Rs 6,000-7,000 by selling it to the vaghri community. At present, the established disposal facilities of unwanted cattle has been disrupted in his village, as people from the vaghri community aren’t doing the cattle trade anymore because of the high risks involved, which leaves him with no other choice but to abandon these unproductive male cattle on streets to save the recurring maintenance cost, which could be around Rs 7,500 every month at the rate of Rs 25 per cattle on a daily basis.

With the market size of tractor growing at a compounded annual growth rate of 9%, it would not be surprising to see 44 million draught bullocks, as per the 2012 Livestock Census, completely out of agriculture in the near future. An addition of about 6 million tractors can completely replace these 44 million bullocks, assuming that one tractor-day is equivalent to eight bullock-days to cultivate one hectare of land.

Even if the tractor industry grows at a modest growth rate of 6%, India will have another 6 million tractors by the end of 2025. It means male cattle will have negligible use in farms by end of the next decade. In the future, farmers will have to be more selective to maintain an efficient cattle herd for milk production, as they will have to lay off more numbers of surplus males.

However, the recent restrictive rules on cattle trade are crimping farmers’ choices to efficiently manage their stock, which can turn the cattle into liability. Recent amendments in PCAA have the potential to severely disrupting the bullock market, which are mainly sought by buyers for meat and other by-products. With few buyers and excess supply, resale value of bullock is likely to plunge.

Rise of the male cattle

It is uncertain on who will take care of these 140 million heads of redundant creatures. If the farmers are expected to care for them, the feeding cost of these cattle will put an extra financial burden on millions of rural households owning cattle. It also has the potential to derail India’s thriving dairy industry because the cost of milk production of cattle owners will increase, as farmers have to feed a larger herd.

Eventually milk production from cows could become economically unviable and there will be no alternative to buffalo milk. In these circumstances, farmers will have only two choices — either they will desert them on streets or stop rearing them and switch to buffaloes, which will be a more lucrative option as no social taboos are attached to their slaughter.

Cost of not culling

In case of the government taking the responsibility to safeguard the lives of 140 million male cattle from slaughter, it has to spend Rs 8,400 million daily on feeding alone, at the rate Rs 60 per cattle. This level of spending is unrealistic. Even if the supposed benefits of the dung-urine economics is added to the equation, rearing this large stock of male cattle doesn’t stand on economic grounds.

The yearly requirement of manure in the country can’t exceed 280-300 million tons in the future, assuming application of one ton of manure per hectare of cultivated area. This amount can be conveniently supplied with half of the female cattle stock — 100-120 million cows — which can bring additional income to the farmers besides milk.

It is thus important to understand that the growing cattle protection movement — both by stringent legislation and private vigilantes — is against the elementary principles of livestock management. It would deprive farmers from weeding out unproductive animals. It will increase the cattle population in the country but halt overall livestock development. Although this might sound exaggerated at this point of time, there is a real possibility that the number of holy cows will decrease in India.

Abhishek Rajan is a researcher at the IWMI-Tata Program.