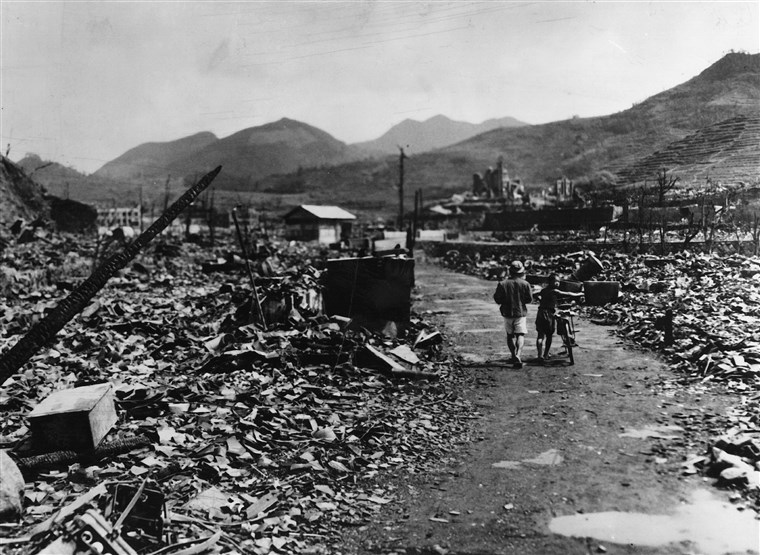 he ruins of Nagasaki after the dropping of the atomic bomb on Aug. 9, 1945.Hulton Archive / Getty Images

People like me learned first hand the results of using nuclear weapons. A full-scale nuclear war would destroy both the world and humanity as we know it.

It has been 75 years since August 9, 1945, when the atomic bombing of Nagasaki opened the nuclear weapon age. I was 2 years old, and only 1 1/2 miles from ground zero of the nuclear explosion in there; I was, fortunately, unhurt by the blast itself. I was rescued by my mother from a half-destroyed wooden house just before it burned down.

I am one of a dwindling number of hibakusha — atomic bomb survivors; we are now, on average, 83 years old. Many of us still die of radiation-induced cancers and leukemia from the bombs dropped on our cities in 1945 because that exposure to radiation — when most of us were just 10 years old or younger — led to gene abnormalities in many organs that are still causing malignant diseases today.

That means, legally and morally, the human toll of the bombings is still unfolding and the total number of casualties cannot yet be calculated.

Only two atomic bombs of what we would, today, consider a rather small size were used by the United States in Japan: They were 20 kilotons (Nagasaki) and 15 kilotons (Hiroshima), whereas the common size today is a few hundred kilotons. Still, one 15- and one 20-kiloton bomb were enough to devastate two medium-sized Japanese cities and kill 200,000 or more people, either instantaneously or within five months due to acute radiation injuries and skin burns.

Almost the same numbers of hibakusha survived the immediate aftermath, only to go on living with the fear of both contracting radiation-related disorders and passing malignant genetic diseases onto their children.

We hibakusha learned firsthand the horrible human consequences of using nuclear weapons and thus have long feared that a full-scale nuclear war would destroy both the world and humanity as we know it. This made us determined to fight for nuclear abolition — for the sake of the rest of humanity.

Many hibakusha came together years ago, drawing emotional energy from one another, to begin a campaign against nuclear weapons and move humanity forward by spreading our testimonies worldwide and warning of the global danger of human extinction.

In our first success, we hibakusha witnessed the passage of the Nuclear Non-Proliferation Treaty in 1970 by the United Nations, which gave us hope for a nuclear weapon-free world.

Sadly, as we approached the 50th anniversary of the passage of the NPT, the push for nuclear disarmament had almost stopped, and it seemed like the race for nuclear weapons might begin anew. The U.S., for instance, in August 2019 abandoned the Intermediate-Range Nuclear Forces Treaty (signed by U.S. President Ronald Reagan in 1987), the New Strategic Arms Reduction Treaty (signed by U.S. President Barack Obama and Russian President Dmitry Medvedev in 2010) is set to expire next year, and other countries are building new, smaller nuclear weapons.

To push back against this new nuclear arms race, we hibakusha collaborated with the non-nuclear weapon states and many nongovernmental organizations such as ICAN, the International Campaign to Abolish Nuclear Weapons, to establish a Treaty on the Prohibition of Nuclear Weapons. We finally succeeded in July 2017, and since then, the TPNW has been signed and ratified by 43 countries — close to the 50 needed for it to become official under international law.

However, we are facing a serious opposition to the TPNW by the nuclear states, all of whom refuse to sign and ratify the treaty. There is a continuing belief in the nuclear weapon states and the allied countries under their “nuclear umbrella” — including many NATO states, Japan, Australia and Canada — that nuclear weapons are still necessary to keep peace.

Here in Japan, we hibakusha shed tears when our government declared at the United Nations Assembly in 2017 that it would not sign or ratify the TPNW, despite Japan being the only nation to experience nuclear attacks and know in the greatest detail the human consequences and social destruction of the weapons. The nuclear umbrella offered under the U.S.-Japan Security Treaty for the past 60 years has bound Japan tightly to U.S. political and military leaders, who oppose the treaty.

But the idea of nuclear weapon-dependent international security is just a pandemic that has spread over many big and wealthy nations since the Cold War era; the imaginations of politicians are infested with this political illness for which they constantly refuse treatment. The danger that comes from this adherence to old ways of seeing the world could be catastrophic. Were a nuclear war to take place, there would be an immediate, huge loss of human life, an ensuing nuclear winter, a succeeding devastating agricultural crisis causing a global famine for billions and, ultimately, possible human extinction.

We know now that the COVID-19 pandemic can be successfully overcome only by global collaboration in medical care and governmental cooperation in international socioeconomic regeneration. The same is true for the pandemic of diseased nuclear thinking.

This 75th anniversary of atomic bombings of Hiroshima and Nagasaki reminds us that so far, we have failed in realizing a nuclear weapon-free world. However, we hibakusha still believe there is time to realize this goal — time to re-establish international confidence and collaboration to tackle this existential threat to all of humanity.

Dr. Masao Tomonaga is a professor of medicine specializing in hematology to treat atomic bomb survivors who suffered from leukemia. In 1983, he joined the International Physicians for the Prevention of Nuclear War, which won the Nobel Peace Prize in 1985. Currently, he is the vice president of IPPNW for the North Asia Region, including North Korea and Mongolia. He was born in Nagasaki in 1943.