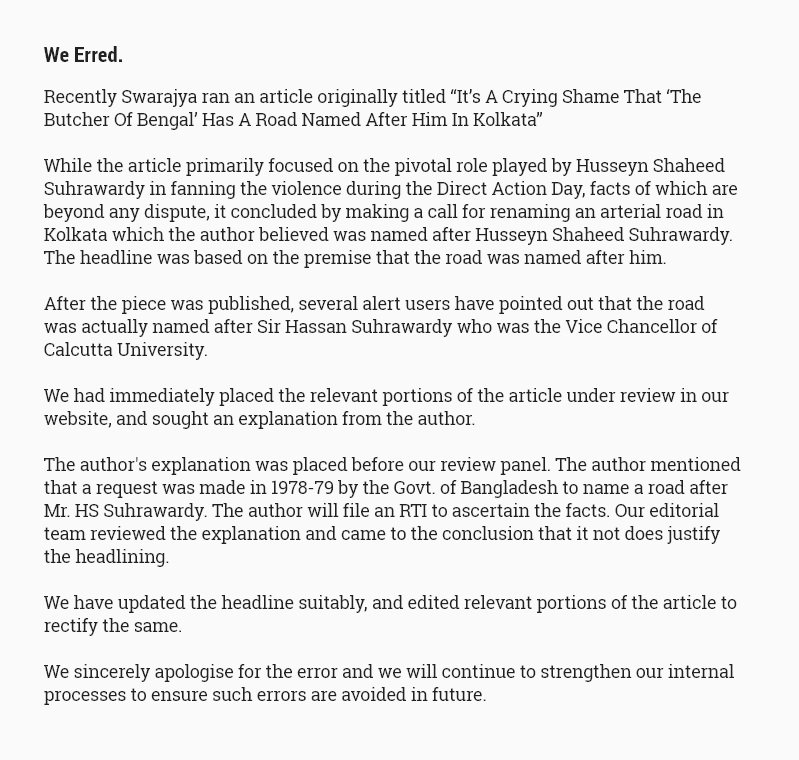 Many appreciated Swarajya’s act of apologizing for the error.

Swarajya in their apology claimed that the name of the road wasn’t the central focus of their article while stating, “article primarily focused on the pivotal role played by Husseyn Shaheed Suhrawardy in fanning the violence during the Direct Action Day“. However, multiple sections of the article, i.e. the title, the snapshot section of the article and the concluding paragraph referred to the road. The concluding paragraph even demanded that the road be renamed while stating, “It is high time the name of the road is changed. Bengal does not lack heroes, and it is high time one of them is honoured instead of a criminal who caused so many deaths and such destruction in the city.”

A classic case of how a non apology is to be written. More details in further tweets on how this harms journalism + https://twitter.com/swarajyamag/status/899517501771456512 …

This is how the story was portrayed & made relevant. The key premise was that a road was *named* after the “Butcher of Bengal”. It *wasn’t*+ pic.twitter.com/URKzI52Rza

Instead, as @AltNews & @doubledolphin pointed out, documents clearly show otherwise

Replying to @saikatd and 3 others

Clearly, with such overwhelming evidence, this shows that @SwarajyaMag had produced what can now be labeled as #FakeNews. This is disturbing

Replying to @saikatd and 3 others

While it is appreciable that Swarajya put out an apology, it was shocking to see how the author of the article and the Associate Editor of Swarajya hurled abuses at those who questioned his claims on Facebook and Twitter. Jaideep Mazumdar’s response in some cases was a retaliation to people branding him a ‘Sanghi’ etc. Even so, his language is inexcusable even as a retaliation.

At the time of writing, Swarajya hasn’t put out any statement regarding the abusive behavior of a senior member of their staff. Does Swarajya condone Jaideep Mazumdar’s behavior? Does Swarajya support the act of branding people as ‘lowlife’, ‘jihadi’, ‘imbecile’ when their stories are questioned? Their apology means for nothing if this is how their staff conducts themselves in public life.