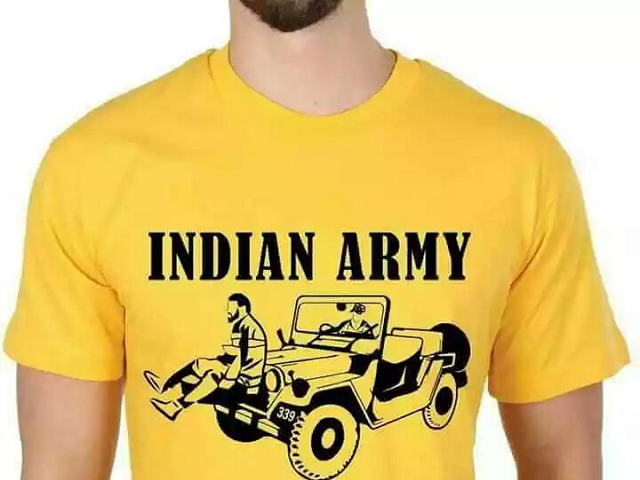 A controversy erupted after an online Indian store put a T-shirt with an image on the front showing a Kashmiri civilian tied to the bonnet of Indian army jeep on sale.

The t-shirt is being sold online by a company reportedly linked to BJP spokesperson Tajinder Bagga. Meanwhile, Tajinder Bagga has defended the move stating that he is merely wearing ones patriotism on ones chest”.

People in Kashmir feel the t-shirts are a glorification of an atrocious and unjustifiable act. Human rights activists fighting on behalf of Farooq Dar, the man who was tied up to the jeep, have filed a defamation case against the promoters of these t-shirts.

A social media user shared the images of the controversial shirt on Twitter.

An indian company is selling T-shirts that glorify Indian Army tieing a Kashmiri civilian Farooq Ahmad Dar to the bonnet of the jeep and using him as a human shield.
The t-shirts are now sold out in all colors and sizes. @cjwerleman@HerNameIs_Bea@dr_rita39@SuddhanSadaf30

The photo of Kashmiri youth named Farooq Ahmad Dar had gone viral over the internet last year in April showing a man being carried along as a human shield.

Dar, a resident of Chil village, had been paraded through several villages of Indian Occupied Kashmir strapped to the front of an Indian military jeep.

Major Nitin Gogoi, who had tied the 26-year-old Kashmiri man to the jeep was praised by the military and awarded a commendation card, according to Indian media reports.

According to Times Now, the T-shirt company, which is reportedly linked to ruling party, BJP’s spokesperson Tajinder Bagga, painted the disturbing graphic, hailing the human rights violations conducted by the Indian army in Occupied Jammu and Kashmir. The phrase says, Indian Army saving your a**, “whether you like it or not”.

Bagga defending his action stated that he is merely “wearing one’s patriotism on one’s chest.” Talkin to Indian media, he said that the shirt was a message for Kashmiris, who are fighting for freedom.

The controversial shirt, which is being sold for Rs495, has not only angered the Muslim community but also put the Indian leader on the fire. A BJP leader Ravinder Raina said that supporting country’s army is not bad but “I think abusing someone is not a part of our democracy”.

“This shows their mentality. They are only provoking the people. A man has been tied up to a vehicle and then dragged in villages. How can that be justified and glorified? We have already filed a defamation case in this matter now,” Ahsan Untoo, Human Rights activist, said.

The incident took place during the bye-elections in Srinagar on April 9.

A video showing Farooq Dar tied to an Army jeep went viral. Farooq had a note pinned to his chest. This will be the fate of stone-pelters – the note read.

The incident had caused a stir in Kashmir and drew strong criticism from the public. The Army didn’t issue any official statement, but it was claimed that the officer involved in this incident took the step because there was massive stone pelting in the area.

The government had launched an investigation after the incident. The Jammu and Kashmir Police had filed an FIR and it was stated in the investigation that Farooq Ahmad Dar had cast his vote before he was used as human shield by the Army in violence.

The State Human Rights Commission in its directions had asked the government to compensate Farooq Ahmad Dar. The government, however, refused to comply stating there was no scheme or policy in vogue in the state, which could cover the payment of compensation in such a matter.