Let us intensify our protests: Thirumurugan Gandhi from Puzhal Prison 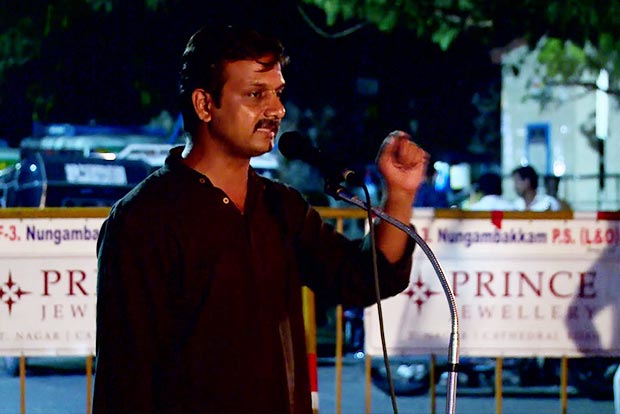 Thirumurugan Gandhi, the convenor of ‘May 17 Movement‘. May 17 Movement is a prominent Tamil National Civil rights activist group fighting for the rights of Tamils in particular Eelam Tamils. It was formed in May 2009 during the war in Sri Lanka when… END_OF_DOCUMENT_TOKEN_TO_BE_REPLACED

Open Letter to the Goan  Minister The controversy over a Goa cabinet minister’s demand to ban mini-skirts and bikinis in order to “protect Goan culture” refuses to die down, with designer Wendell Rodricks asking him to to wear a loin… END_OF_DOCUMENT_TOKEN_TO_BE_REPLACED

Shri Narendra Modi Prime Minister of India New Delhi Through the Minister of Labour & Employment Government of India, Shram Shakti Bhavan, New Delhi Dear Sir, From the All-in-One-Unity platform of all the Central Trade Unions (CTUs) of the country we convey our greetings to the new Prime Minister of India.  People of the country who have voted you to govern the country have great expectation from your Government on the question of life and livelihood.  We expect you to fulfill the aspiration of the mass of the people who produce wealth for the nation, resources for the exchequer and also profit for the employers. The trade union movement reiterates that workers are committed for people oriented growth and advancement of the nation. Hard fact is that it is workers who are the living force behind keeping the national economy afloat. We seek to draw your kind attention to the Ten-point Charter of Demands (CoD) which we have been pursuing through countrywide peaceful democratic mobilization, agitation and repeated strike action in phases spreading over a period of last over four years at all levels. These demands have been formulated jointly by all the Central Trade Unions in the country along with almost all national Federations of workers and employees in the major industries and service establishments in the country. These demands voice the most basic bottom line needs of the working people. These demands are: Urgent measures for containing price-rise through universalisation of public distribution system and banning speculative trade in commodity market Containing unemployment through concrete measures for employment generation Strict enforcement of all basic labour laws without any exception or exemption and stringent punitive measures for violation of labour laws. Universal social security cover for all workers Minimum wages of  not less than Rs 15,000/- per month with provisions of  indexation Assured enhanced pension not less than Rs.3,000/- p.m. for the entire working population Stoppage of disinvestment in Central/State PSUs Stoppage of contractorisation in permanent perennial work and payment of same wage and benefits for contract workers as regular workers for same and similar work Removal of all ceilings on payment and eligibility of bonus, provident fund; increase the quantum of gratuity Compulsory registration of trade unions within a period of 45 days from the date of submitting application; and immediate ratification of ILO Conventions C 87 and C 98 Besides the above, the notification for minimum pension of Rs.1,000/- per month and raising the ceiling of coverage under EPF Act from Rs.6500/- to Rs.15000/- is overdue. The previous Govt. had cleared these two measures.   The validity and justness of the issues of our CoD has found expression in the speech of the then Prime Minister while addressing the 45th session of the Indian Labour Conference (ILC) held   on 17th May .2013 that “the demands of recent two days strike by the workers are also the demands of the people at large and most of them are undisputable and unexceptionable and also are in the advanced stage of consideration by the Government.” The ILC development was followed up with constitution of a Group of Senior Ministers with mandate to meet the CTUs to settle the issues. Bilateral exercise did take off but remained inconclusive and the issues still stand unresolved.   All the Central Trade Unions of the country feel very much agitated at the wavering attitude of the previous Government on the issues raised above which ignored the conclusion of the ILCs. In the meantime the situation has got aggravated. The price-rise of essential commodities is making the life of common people miserable. The recent increase in passenger and freight charges by Railways will have cascading effect on price front. Mass-scale and widespread contractorisation of regular jobs has been continuing in the Govt, public and private sector, trampling the concerned law underfoot. Opening up almost all sectors to FDI and reckless deregulation of the strategic sectors of the economy including the financial sector and aggressive disinvestment of PSUs and privatization of crucial public utility services appears to be pursued by the new Government.   At this point we urge upon your government to kindly refrain from any kind of unilateralism and one-sided approach either by the Central Government or any State Government on matters involving and affecting workers. We feel such submission has become necessary due to the unfortunate unilateral steps initiated to amend several vital Labour Laws by the present Government of Rajasthan. In this connection we are also seriously concerned at the sudden hurried steps by the Union Labour Ministry to push through major amendments to number of principal Labour Statutes affecting workers.   We urge upon you, Mr. Prime Minister, to ensure that labour is accorded its due recognition and the issues noted above are attended and satisfactory settlement is arrived at through bilateral discussion between the Central Government and the joint platform of Central Trade Unions at the earliest. .   With regards,     BMS         INTUC            AITUC                   HMS CITU AIUTUC         TUCC SEWA            AICCTU           UTUC               LPF

A letter to my Prime Minister, Narendra Modi

Ali Khan Mahmudabad in Counterflows | India, Politics As a citizen of India I want to have faith in my government. No matter who is elected I want to feel that the only thing that matters when the government looks at me is the fact… END_OF_DOCUMENT_TOKEN_TO_BE_REPLACED

An open letter to Narendra Modi BY Gopalkrishna Gandhi

May 19, 2014 Let this historic win be followed by a historic innings, which stuns the world by surprises your supporters may not want of you but many more would want to see you unfurl, writes Gopalkrishna Gandhi Dear Prime… END_OF_DOCUMENT_TOKEN_TO_BE_REPLACED

Sachin Mali of the Kabir Kala Manch will release a new collection of his work next week.   Mridula Chari      It could have been a regular poetry reading, with Girish Karnad as the chief guest, and… END_OF_DOCUMENT_TOKEN_TO_BE_REPLACED

In all the mud-slinging no one has stopped to ask the students what we make of this situation.   Posted on April 28, 2014, 8:25 AM   By Ashutosh Lobo Gajiwala Mumbai:A few days ago the Principal… END_OF_DOCUMENT_TOKEN_TO_BE_REPLACED

Sexual Assault: Our Harvard Can Do Better Posted: 04/24/2014  This post is an open letter written and co-signed by a group of over 150 Harvard alumni, including Nancy Lima Taylor, Kaveri Indira Ph.D, Kevin Shawn Hsu, and myself. In this letter,… END_OF_DOCUMENT_TOKEN_TO_BE_REPLACED

In the Background of Elections – The Development Debate Dr. Frazer Mascarenhas The approaching elections have brought an interesting discussion to the public forum on what constitutes human development and how it is to be achieved. The Gujarat model has… END_OF_DOCUMENT_TOKEN_TO_BE_REPLACED