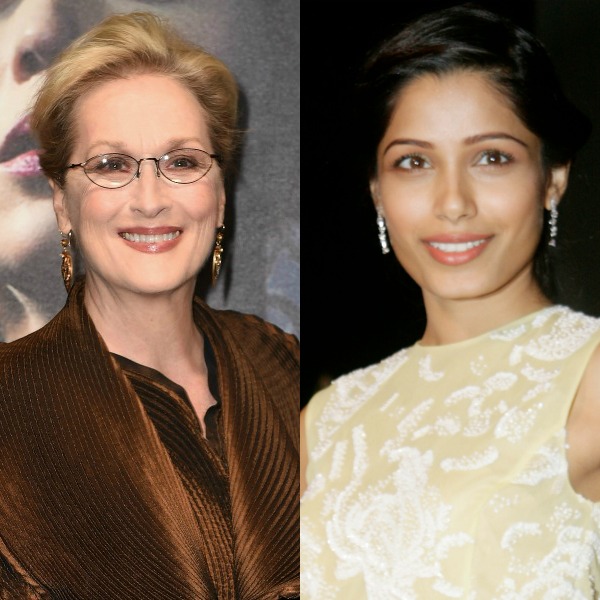 March8th, 2015 Dear Meryl Streep and Frieda Pinto Happy International Womens Day !!   I am writing to you to ask you why are you supporting  the patriarchal “Daughters of India” campaign ?   Historically patriarchy has sought to enslave women in roles of motherhood, sisterhood, and daughterhood as ways of legitimising the restrictions put upon them. If  a  Campaign to stop violence against women is meant to bring about change continues to work within the patriarchal framework it seeks to annihilate, it defeats its own purpose. Isnt it ?   The anti rape movement after the decemeber gang rape in 2012 was a large spontaneous upsurge,  which was very creatively  mobilised with students, activistsm feminists together . It systematically challenged and rejected the patriarchal protectionism that only offers “daughters”“wives or sisters  protection in that capacity rather than as human beings who  assert themselves and resist attacks on their bodies and rights. The  movement evolved and raised the demand for ‘unconditional freedom for women’. Some of the popular slogans during the protest following the December 16, 2012 rape were, “We want freedom from fathers and brothers”. The protesters said, “Don’t call us ‘daughters’ and offer us ‘safety’ in exchange for freedom.” The title of the documentary does not reflect this quest for autonomy.  India’s Daughter actually locates the ugly rape culture mindset in the rapists and their defence lawyers, it does not show how the same mindset is shared by those who are within the legal and judicial system . The anti rape movement also  rejected voices that were ready to imprison and control women and girls under the garb of ‘safety’, instead of ensuring their freedom as equal participants in society and their right to a life free of perpetual threats of sexual assault, both inside and outside their homes.   The students came out with posters saying, ‘don’t teach us how to dress – teach men not to rape’ and others saying, ‘your gaze is the problem so why should I cover myself up’. This anger had clearly stopped being about this one rape case and punishment.Now this was  not being directed at the one incident, it was actually raising larger questions about why a woman is put in the dock every time there is a case of sexual violence and why is there a discussion on what she could have done to avoid it. The discourse was out of this comfort zone of patriarchy. So it was important to realise that it was not enough to oppose rape but to oppose it in ways that challenge rather than reassure patriarchy. Sexual assault occurs with frightening regularity in the world… END_OF_DOCUMENT_TOKEN_TO_BE_REPLACED

Claiming Freedom From Violence And Fear: Kamayani Bali-Mahabal– Women Feature Service After the brutal gang rape of a young woman in December 2012 in New Delhi, following which she succumbed to her grievous injuries, there was a great upsurge of… END_OF_DOCUMENT_TOKEN_TO_BE_REPLACED

Rape in India: Reading between the lines #Vaw #mustread

Sometimes photographs — even ones that go viral — aren’t worth a thousand words. Here’s what they won’t tell you. June 15, 2014 5:00AM ET by Neha Dixit, aljazeera In a village called Badaun in the northeastern state of Uttar Pradesh in… END_OF_DOCUMENT_TOKEN_TO_BE_REPLACED

STRANGE FRUIT JUN 9, 2014 9:58 AM – BY THENMOZHI SOUNDARARAJAN A Dalit woman explains how the caste system is a lethal one where, according to India’s National Crime Records Bureau, four Dalit women are raped, two Dalits are murdered, and… END_OF_DOCUMENT_TOKEN_TO_BE_REPLACED

April 29, 2014 by Robert Jensen |  This year’s Sexual Assault Awareness Month, drawing to an end tomorrow, was full of the usual stories about men’s violence, especially on university campuses. From football-obsessed state schools toelite private campuses, the reality of rape and rape culture… END_OF_DOCUMENT_TOKEN_TO_BE_REPLACED

Women’s agenda has clearly been short-changed by the Delhi government. Even at their best, they are only paternalistic guardians of women’s modesty. SHIVANGI NARAYAN | JANUARY 31 2014 The AAP government in Delhi refuses to ban khap panchayats. It condones search and… END_OF_DOCUMENT_TOKEN_TO_BE_REPLACED

Jan 23, 2014, 12.10 AM IST No country’s path to growth and development can bypass the goalposts of women’s empowerment and Women’s safety is a prerequisite to both, besides being a fundamental human right. Most political parties have accepted this… END_OF_DOCUMENT_TOKEN_TO_BE_REPLACED

By Deepti Menon, New Indian Express 12th May 2013 12:00 AM Photos Protests by women fighting for their rights have been part of a long history of feminist struggle. Feminism is not being part of an organisation; rather it takes inspiration… END_OF_DOCUMENT_TOKEN_TO_BE_REPLACED

#Delhigangrape-It’s Not about Patriarchy #Vaw

Linking it to the Delhi gangrape is an exercise in self-delusion BY Omar Ahmad , Open Magazine, Jan 19,2013 TAGGED UNDER | violence | Delhi gangrape | patriarchal culture MISHIT Maybe it was inevitable, but it is still sad to see the protest around the death of… END_OF_DOCUMENT_TOKEN_TO_BE_REPLACED