#BreakAadhaarChains is a campaign to stop the government from treating us like criminals out to loot the state. Today, Aadhaar is required for a host of services from birth certificates to death certificates, school admissions, scholarships, PDS rations, NREGA job cards,… END_OF_DOCUMENT_TOKEN_TO_BE_REPLACED

Stop #Aadhaar- What you can do

Sign Petition to Chief Justice of India  https://secure.avaaz.org/en/petition/Chife_Justice_of_India_Stop_Mandatory_Aadhaar_for_services/share/?new We the undersigned  request  Chief Justice of India  to stop the Government of India to continue committing contempt of court by implementing Aadhaar in each and every way , that it is doing inspite… END_OF_DOCUMENT_TOKEN_TO_BE_REPLACED

ALOYSIUS XAVIER LOPEZ The HinduUsha Ramanathan, an expert on law and poverty with students at the Asian College of Journalism in Chennai on Thursday. Photo: K. V. Srinivasan “In India, we have no idea if biometrics will work or not”… END_OF_DOCUMENT_TOKEN_TO_BE_REPLACED

How Nilekani compromised us on #Aadhaar: Now, even UIDAI worries about misuse

By R Jagannathan The 600 million Aadhaar number recipients have little legal protection now if the data falls into the wrong hands. AFP When you put the cart before the horse, you are unlikely to achieve much movement. When your… END_OF_DOCUMENT_TOKEN_TO_BE_REPLACED 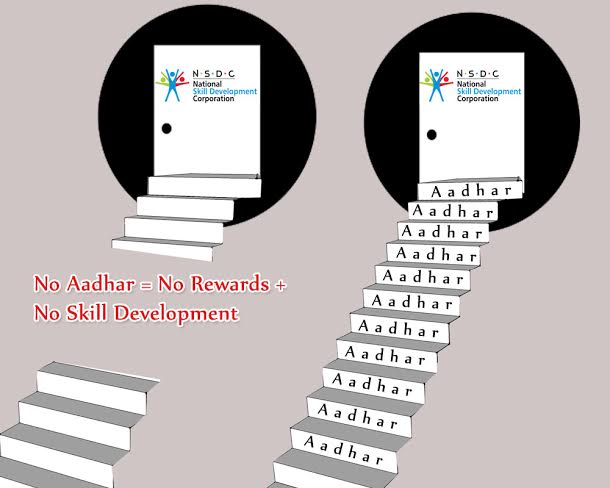 March 6th, 2014- Kamayani Bali Mahabal aka Kractivist What could be the unholy nexus between National Skill Development Corporation (NSDC).  and The Unique Identification Authority of India (UIDAI)   ? On the face of it nothing , UIDAI is trying to give Indians a supposedly unique identity and NSDC is giving skilled labour and jobs. So whats wrong here ? What happens when Sam Pitroda, Adviser to the Prime Minister on Public Information Infrastructure & Innovations and Nandan Nilekani‘s UID Number/Aadhaar project come together , they fool people under the garb of technological revolution , the unholy nexus snatches away the basic human rights . Both have started with a  facade of being voluntary on paper  but  functionally  are mandatory. How did the unholy nexus begin ? In 2008 , The Govt of India embarked upon an ambitious program , to create an institutional base for skill development in India at the national level, a “Coordinated Action on Skill Development” with  three tier institutional structure consisting – of the PM’s National Council on Skill Development, the National Skill Development Coordination Board (NSDCB) and the NSDC, which was set up as a joint venture between the government and industry lobbies to help the sector meet an acute shortage of skilled workers by providing training to millions of youngsters. It does so by partnering with vocational education centres across the country.   In 2009 the UIDAI  was established – a mammoth technology project under Nandan Nilekani, wherein the government services were to be provided, tracked and accounted for along with enabling a multitude of private sector products and services that rely on accurate and positive identification of consumers.However, the project itself is less about technology, and more about the politics and processes of providing every Indian with a Unique ID.How can Aadhaar be deemed ‘voluntary’ if service delivery is being made dependent on it? The UID project has been termed llegal and unconstitutional. As the two projects began with teething problems, in 2011  the UIDAI   signed a memorandum of understanding with NSDC  to create a pool of 300,000  trained workers for enrollment agencies of Aadhaar. According to the MOU, Enrolment agencies (of the UID) which were facing  the challenge of getting good quality manpower  adequately trained in the Aadhaar enrolment process and conversant with local language to work locally., will be provided by  NSDC through its partners . The plan was to address this challenge by developing a pool of adequately skilled and certified manpower.   How did  the coercion begin ?   NSDC claims that National Skill Certification and Monetary Reward Scheme encourages youth to voluntarily enroll in institutions by providing them an incentive of Rs 10,000 to undergo training. But really, is this voluntary ? No way, the coerrcive element is the criteria to have an aadhaar card . The scheme that is branded as  STAR  (Standard Training Assessment and Reward) aims to encourage  skill development for youth by providing monetary rewards for successful completion of approved training programmes, clearly under elegibility criteria states , you should have aadhaar So if you want  skill development , get aadhaar , If there is No aadhaar, there  is no rewards no skill development and no jobs . The NSDC site informs . http://nscsindia.org/FAQ.aspx   At the time of registration, it is desirable that the trainee shares the Aadhar number with the Training partner. In case the Aadhar number is not available at the time of registration, it is mandatory to share the mobile number. While the trainee can undergo training without an Aadhar number, certificate generation and monetary award is not possible without the Aadhar number. The trainee must get an Aandhar number before assessment and certification is completed. The Training Provider may support the trainee in the creation of the Aadhar number before training completion..   Both work hand- in-glove . Both UID and NSDC Star Scholarship are nothing but scratching each others back, getting their targets fulfilled , at the expense of violating privacy rights of the people . After the Supreme  Court  interim order  that… END_OF_DOCUMENT_TOKEN_TO_BE_REPLACED

R. SAIRAM, The Hindu Schools have been instructed to collect the Aadhaar numbers only from those who have it: CEO Even as some private schools are forcing students from classes LKG to Plus-Two to furnish Aadhaar card numbers for… END_OF_DOCUMENT_TOKEN_TO_BE_REPLACED

By Aman Sharma, ET Bureau | 5 Dec, 2013 IB raised the objections at a November 6 meeting of senior officials of the investigative agency, the home ministry and UIDAI. ET SPECIAL: Save precious time tracking your investments NEW DELHI: The… END_OF_DOCUMENT_TOKEN_TO_BE_REPLACED

Setback for Centre by Ritesh K Srivastava, ZEE NEWS T Zee Media Bureau New Delhi: In a setback for Centre, the Supreme Court on Tuesday maintained that Aadhar card is not compulsory for availing social benefits. The apex court, however, agreed… END_OF_DOCUMENT_TOKEN_TO_BE_REPLACED

The next catastrophe to hit UID will be on breach of privacy, which will happen sooner than later  Surabhi Agarwal  October 2, 2013, BS  Tech czar and soon to be politician Nandan Nilekani joined Twitter last week and already has… END_OF_DOCUMENT_TOKEN_TO_BE_REPLACED

Oct 4, The Hindu The Centre on Friday moved the Supreme Court seeking modification of an earlier order, which said Aadhaar card is not mandatory and no person should be deprived of any government schemes for want it. A bench… END_OF_DOCUMENT_TOKEN_TO_BE_REPLACED