Take our money, not FDI: Rail unions to government 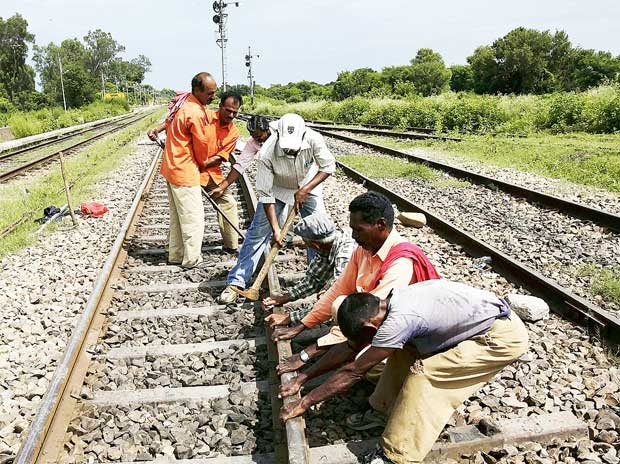 The two major railway unions have proposed to the government an unprecedented alternative to privatisation or inviting foreign investment, to help raise funds and improve revenue.

The National Federation of Indian Railwaymen (NFIR) and the All India Railwaymen’s Federation (AIRF) had both been demanding an end to the government’s opening of the carrier. Now, they have both offered the Rs 10,000-crore provident fund (PF) deposits of rail workers for development of the cash-short carrier, also the country’s largest single employer.

“We have proposed using the PF balances of the 13.1 lakh workers and 12 lakh retired personnel,” M Raghavaiah, general secretary of NFIR, told Business Standard. “We can convince the workers on depositing this money with the railways on an interest basis, rather than keeping it in bank accounts.”

NFIR says it represents a little over a million of the 1.3 million workers. And, sees its idea as an attempt to “save the country and Indian Railways from the onslaught of foreign direct investment (FDI) and privatisation in the name of public-private partnership (PPP)”.

Raghavaiah has said in a letter to railways minister Suresh Prabhu, “Serving and retired railway employees can contribute a loan for investment toward development with an interest rate at 10.5 per cent, which would still be one per cent less than the money borrowed from the market.”

The move is part of a bigger plan to help the ministry raise at least Rs 50,000 crore to fund works in track doubling, electrification and signalling, among others. “We have also told the ministry an additional Rs 9,000 crore can be freed for use annually, if it stops paying dividend to the government. No other infrastructure ministry pays a dividend. Why should we?” asked Raghavaiah.

Experts contest this argument, saying no other ministry, apart from railways, is in the business of operations.

The third part of the unions’ fund-raising strategy is to create a source of permanent income by allowing leasing of IR’s mega land bank of 40,000 hectares.

Asked whether the workers’ ideas had cut any ice with the Railway Board chairman (CRB), Arunendra Kumar, the union leader said: “If the prime minister has decided, CRB cannot say anything.”

NFIR is joining the proposed day’s national strike with other central trade unions on December 5.

The Union Cabinet had in August relaxed the FDI norms by permitting 100 per cent investment in projects such as high-speed trains, suburban services, dedicated freight corridors, freight and passenger terminals. The ministry has notified a list of 17 such areas, including rail route electrification, signalling systems and logistics parks. That list is now being expanded to accommodate more projects or areas where FDI can be allowed, minister of state Manoj Sinha had said on Friday.

In addition, the ministry is preparing a list of 50-60 mega projects which can be developed on PPP mode.

This is not the first time the rail unions have surprised with unusual suggestions. In 2011, NFIR and AIRF had demanded the ministry limit the subsidy on certain classes of passengers and raise fares on the rest.

IR’s finances have worsened over the years, in the absence of regular passenger fare increases and maintenance of high freight rates to compensate for losses on passenger fares. And, investments in loss-making projects as part of its social obligation and a huge pay burden.