Tale of two health ministers: One succeed despite failures while other failed despite success 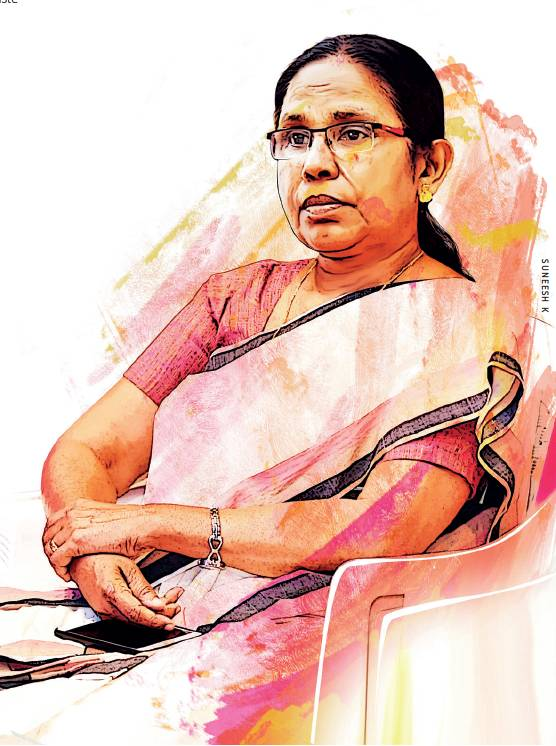 India’s political culture is deeply disappointing and depressing. Even those who wish to counter the BJP and Hindutva suffer from the same mind set and sometimes worse. After ‘building’ a brand, we sideline some to create our own monopolies. A few days back, Kerala lost one of its greatest left leaders K K Gauri Amma who should have been the chief minister of the state yet was thoroughly isolated in the party she dedicated her life to, compelling her to leave the party. Gauri Amma hailed from the historically marginalised community of Ezhava which is categorised as OBC in the state though many social historians suggest that the community was actually an untouchable community.

Though the current chief minister Pinarayi Vijayan too hails from the same community, Kerala has long been dominated by the brahmanical caste elite. Right from EMS Namboodiripad, who was Kerala’s first chief minister till E K Nayanar, the longest serving chief minister of Kerala, their position as well as attitude towards Dalits and marginalised remained questionable. EMS was a proud brahmin who found a certain ‘positive’ aspect in the caste system. E K Nayanar would get away with calling a Congress MLA as ‘that Harijan’ who dances in the tone of A K Antony.

Despite her huge mass base and political competence, Gauri Amma remained at the margin of her party. The party’s top leadership did not have time to acknowledge her contribution and remained in persistent denial mode that it does not believe in ‘identity’ politics.
History is repeating in Kerala. The new Pinarayi Vijayan ministry has all the new faces except for the chief minister. While the CM has a right to introduce the persons of his choice. It is shocking to see that an efficient Minister like K K Shailaja, who won from the highest margin in Kerala, over 60,000 votes, did not find a place in the Ministry. If there was one Minister whose work has been applauded and acknowledged internationally, it was K K Shailaja, the then health Minister of Kerala, for her handling of the CoronaVirus. It became a model state. Though it is also a fact that Kerala has a well built health infrastructure and that is a historical legacy of the state yet at this critical juncture Shailaja’s handling of the situation got the LDF political benefit. The mandate that LDF got in Kerala is not merely the leadership of Pinarayi Vijayan but that of K K Shailaja too, perhaps more of her and that seems to be the reason why she has been dropped. In these difficult moments, the leadership should have pursued K K Shailaja as it would have made things much better for the state but then CPM always wanted to ‘give’ younger leadership a chance, except in its ‘Polit Bureau’. In the name of new ministers, the Chief Minister’s son in law has found a place in the ministry.

One may ask this question as to why KK Shailaja was not ‘included’ in the Ministry. She too hails from Ezhava community and is highly qualified who has proved her worth as Health Minister of the state. She won from the highest margin. Then why didn’t the chief minister include her ? Will K K Shailaja be the new Gauri Amma who was compelled to leave the party. Was the chief minister feeling threatened with the success of K K Shailaja.

Look at the Supreme irony of India and our political culture. A highly successful Health Minister does not find a place in the Ministry in Kerala while one of the worst health ministers of independent India, whose only job is to retweet PM’s statements, is enjoying the complete patronage of the government at the centre. An absolutely incompetent health minister Harsh Vardhan enjoy the complete faith of his ‘leader’ while a highly successful health minister K K Shailaja, is ousted for ‘performing’ so powerfully. Is it the difference between how the left and right function or is it that you are acceptable as long as you don’t pose a threat to the ‘supreme leader’. Probably, supreme leaders everywhere want dumb ministers, who can be termed as glorified office assistants which reduces them to just defending the government and accusing the opponents. K K Shailaja’s example makes it abundantly clear that your success in a particular ministry may be the reason for your ouster from the same. It looks like every supreme leader needs a ‘Harsh Vardhan’ to keep their position unchallenged. In BJP, every achievement belongs to Narendra Modi while failures have to be dealt by the individual minister. That way, blaming Harsh Vardhan for the failure of our efficient handling of the Covid 19 is not correct, it is the PMO which is handling the situation under the Prime Minister. Can any one then blame the prime minister and his babus for the failure in handling the current crisis ? No, that is where Harsh Vardhan remains important as he will face the blame for the failure of the things which he actually never did. Supremo’s want such netas who can easily give credit to their leaders when they succeed and accept the blame when they fail. Shailaja enjoyed the laurels and media glare making the chief minister a bit uncomfortable while Harsh Vardhan remained completely loyal to his leader.

Even when political manipulations will allow more and more leaders to follow the path of Harsh Vardhan and enjoy patronage, it will really be sad and the death of democracy if leaders like K K Shailaja do not speak when needed. We know all of them follow the party guidelines but it is essential to speak where the party is wrong.

To make democracy successful that respects merit and commitment, the success of leaders like K K Shailaja remains extremely important. Will it happen ?

Are you serious, Mr. Modi? As far as women's representation in Parliament is concerned ?
Human DNA Profiling Bill: A tool that could be misused
#India- A report on National minority women's convention
Priyanka Chopra as Mary Kom is as offensive as Tom Hanks as Muhammad Ali