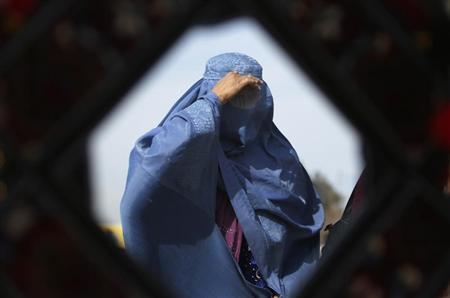 By Rob Taylor and Folad Hamdard

(Reuters) – One of Afghan President Hamid Karzai‘s main religious advisers will not overturn a decree issued by clerics in the north reimposing Taliban-style curbs on women, in another sign of returning conservatism as NATO forces leave the country.

Just days after the United States launched a $200 million program to boost the role of women in Afghanistan, a senior member of the country’s top religious leaders’ panel said he would not intervene over a draconian edict issued by clerics in the Deh Salah region of Baghlan province.

Deh Salah, near Panshir, was a bastion of anti-Taliban sentiment prior to the ousting of the austere Islamist government by the U.S.-backed Northern Alliance in 2001.

But the eight article decree, issued late in June, bars women from leaving home without a male relative, while shutting cosmetic shops on the pretext they were being used for prostitution – an accusation residents and police reject.

“There is no way these shops could have stayed open. Shops are forbusiness, not adultery,” Enayatullah Baligh, a member of the top religious panel, the Ulema Council, and an adviser to the president, told Reuters late on Friday.

Residents of Deh Salah described the order as a “fatwa”, or religious edict, although only senior clerics in Kabul should issue such a binding religious order.

But underscoring opposition to the edict, a mayor was shot dead by a teenaged shop owner while trying to enforce the order, which also barred women from clinics without a male escort, threatening unspecified “punishments” if they disobeyed.

Afghanistan has one of the world’s highest infant mortality rates and more than a decade after the U.S.-backed toppling of the Taliban, it still ranks as one of the worst nations to be born a girl.

Under Taliban rule from 1996 until 2001, women were forced to wear the head-to-toe covering burqa and sometimes had fingers cut off for wearing nail varnish.

The decree, signed by a conservative cleric in the area named Zmarai, contained a warning of holy war if authorities tried to block it: “If officials do react to our demands, we will start a jihad.”

There is growing fear among many people in Afghanistan that the withdrawal of NATO-led forces and efforts to reach a political agreement with the Taliban to end the 12-year-old war could undermine hard-won freedoms for women.

In the deeply conservative, male-dominated country where religion often holds more sway than legal authority, religious leaders have often been a major barrier to women obtaining the rights granted to them under the constitution.

In Deh Salah, home to about 80,000 people, most of them ethnic Tajiks rather that the majority Pashtuns, the main community from which the Taliban draw support, a cosmetic shop owner named Abdullah stood before his business – now hidden behind plywood sheeting – and said clerics were increasingly flexing their muscles.

“They want to bring back the Taliban days. If they have their way they will take control in this district and make life impossible,” said Abdullah.

“We are poor people and they have closed me down. I want the government to take action or we are going to have mullahs running the place like the Taliban again,” he said.

Shah Agha Andarabi, a doctor, said the rumor of prostitution and adultery in Deh Salah was without foundation and was being used as an excuse by conservative clerics to crack down on women.

“There is nothing going on in these shops and I guarantee that. There was no proof. They just wanted to close these shops to women,” he said.

Deh Salah police commander Colonel Abdul Ahad Nabizada also rejected the claims underpinning the decree, but said the mayor who was shot while closing the shops had been frightened into action by the threat of jihad against him if he was deemed to be blocking the edict.

“Everyone here is Muslim. We haven’t seen any behavior like they claim in this small city. There were women coming to get their needs in the market and conservative people were against it,” said Nabizada.

U.S. aid officials this week announced a $200 million assistance package for Afghan women, to be matched by other international donors allied with the NATO-led coalition in the country, due to end combat operations by the end of next year.

Human rights and women’s groups have accused Karzai’s government of backtracking on pledges to protect women’s freedoms, highlighted by parliamentary opposition to a presidential decree outlawing violence against women.

The government also appointed a former Taliban official to the country’s new human rights body, while criminal laws under consideration in parliament would prevent women and girls testifying against family members accused of abusing them.