Tamil Nadu -Casteism has raised its ugly head during the Covid 19 pandemic. 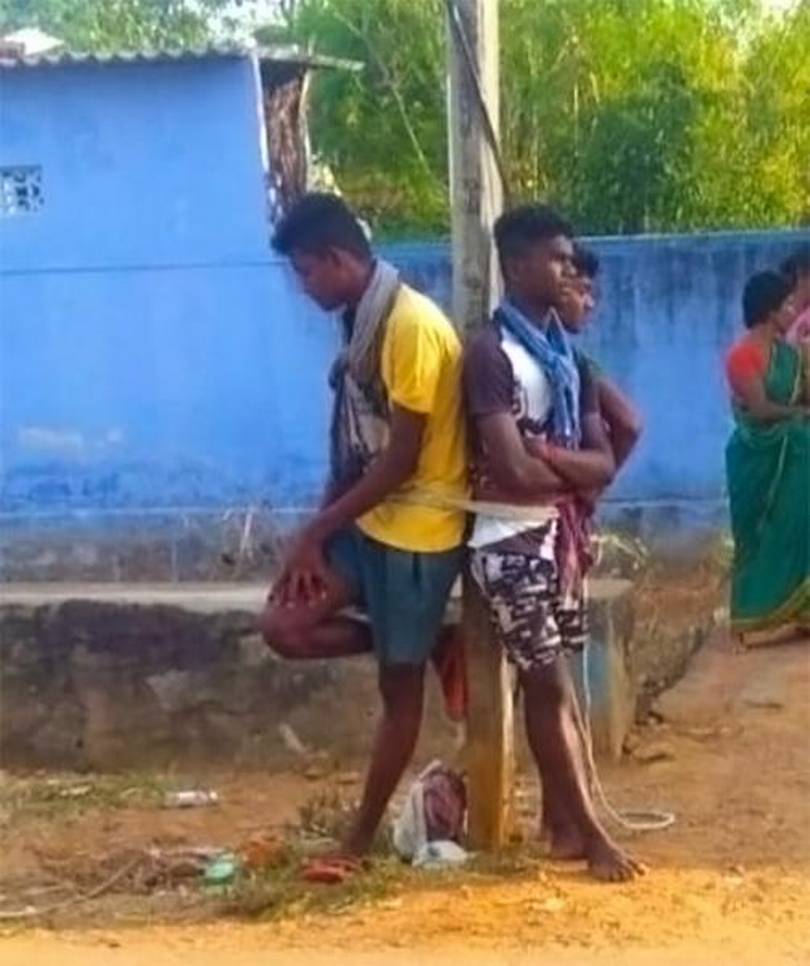 Three Dalit youths were tied to a lamp post at a village in Tirunelveli district over a dispute between two villages. Photo: By Special ArrangementCasteism has raised its ugly head in Tamil Nadu during the pandemic.

The coronavirus scare has not deterred casteist forces in Tamil Nadu from committing atrocities against the marginalised, especially against Dalits.

While the quantum spike in COVID-19 cases is worrying for health officials, the sharp escalation of caste-based atrocities is disturbing, say sociologists. In the past one month there have been more than 20 such cases. Although the majority of these cases have been reported from the northern districts of the State where Vanniyars, a Most Backward Caste community, are dominant, many interior and southern districts such as Pudukottai, Kanyakumari and Salem have also recorded such acts of shame. Many victims, mostly working and studying in cities and towns away from home, had returned to their native villages, mainly to escape starvation and sickness following the country-wide lockdown.

Sudhakar, a Dalit youth who was working in Chennai and had returned to his village, Morappathangal, near Arani town in Tiruvannamalai district, was killed on March 29 for attempting to marry a Vanniyar girl. Gouthama Priyan, an engineering student, was assaulted by Eswaran, a police constable in Kuppanatham village near Chengam in Tiruvannamalai district, on March 31 when he was chatting with his sister’s friends. He was wearing a shirt with the image of Dr B.R. Ambedkar on it. In another incident in a place not far away, in Tiruvannamalai district, a group of 15 caste Hindus attacked Dalit families at Keelpachurthanda village on April 24 following a land dispute. Ten persons were arrested and remanded to judicial custody.

At Ulundurpet town in the newly formed Kallakurichi district, Adi Suresh, a reporter of the Viduthalai Chiruthaigal Katchi’s Velicham TV, was brutally beaten on April 24 by a gang of casteist goons who damaged the portrait of Ambedkar on the wall of the Ulundandavar Koil Government Middle School. Condemning the spurt in the atrocities against Dalits in Ulundurpet and its neighbourhood, the Kallakurichi district secretary of the Communist Party of India(Marxist), T. Elumalai, urged the Collector to take strong action against the culprits.

In Kanyakumari district, a Dalit youth was reportedly murdered for marrying a caste Hindu girl. Three Dalit youths were tied to a lamp post on April 27 at Veppankadu village near Valliyoor in Tirunelveli district over a local dispute. Ambedkar statues there were desecrated.

It was a traumatic experience for 33-year-old S. Amsavalli, an Arunthathiyar woman village panchayat president of T. Konakapadi (reserved for Scheduled Caste-Women) in Omalur block near Taramangalam in Salem, on April 22. Ever since she won the elections five months back defeating a candidate the caste Hindus had propped up, she has not been allowed to carry out her work. One of the ward members of the panchayat is Mohan, who belongs to the powerful Vellala Gounder caste and is the husband of the former president (reserved then for General-Woman).

“Mohan and a few of his caste people had propped up a puppet candidate against me. But I got 1,995 of the 4,500-odd votes polled. The village has a total of 5,000 votes, 950 of them belonging to Arunthathiyars. The rest belong to other backward castes such as Nadars, Vellala Gounders, Mudaliyars and fishermen who too voted for me overwhelmingly,” she said.

Amsavalli further said that since the ward member could not become the vice president, his anger turned against her. “Of the 12 ward members, seven are women and all, except him, have extended me total cooperation. They also elected a Nadar unopposed as vice president. That Mohan could not make his candidate win or get himself elected to the post of vice president aggrieved him. He hampered any development work the panchayat initiated. He even abused me verbally,” she said.

The police have been reluctant to act against him so far, though the Taramangalam police have filed a first information report (FIR) under the provisions of the Scheduled Castes and Scheduled Tribes (Prevention of Atrocities) Amendment Act. Sections 415, 174, 341, 294(b), 506(1) of the Indian Penal Code read with 3(1),(r), 3(2) (va) of the S.C./S.T. Act have been registered against Mohan and a few others.

But Salem-based social activists told Frontline that a few senior police officers in Taramangalam police station are from Mohan’s caste. “Otherwise, how can you justify the police failure to arrest him until now? In fact, the police are encouraging some unscrupulous elements to file counter-complaints against the president’s husband, Satheeshkumar, and the vice president. It is nothing but intimidation.”

The Salem District Collector, activists further claimed, was yet to visit the village to sort out the issue. Asked whether she was allowed to function in the panchayat office, Amsavalli said that there was no such problem as of now. “But with no funds what work can we undertake?” she asked. Meanwhile, she has submitted a petition to the National Commission for Scheduled Castes in this regard.

Many Dalit village presidents echo Amsavalli’s views. Sadaiyan Peyaran, president of Rasendrapattinam village near Vriddachalam in Cuddalore district, claimed that he and other presidents faced similar problems, especially during the COVID pandemic. He said that village panchayats should be made financially independent and legally empowered.

The activist and academic Vetri Sangamithra, who has exposed a few atrocities that have taken place in Tiruvannamalai district, said it was painful to note that caste hatred prevailed tenaciously even during a pandemic. “It is unfortunate that such inhuman acts continue in this State,” he said.

Madurai-based non-profit social organisation Evidence has carried out a study on caste atrocities across Tamil Nadu during the pandemic period. “The study,” said its executive director A. Kadir, “exposes some disturbing elements such as the strong casteist mindset of a society even in times of global crisis.” Speaking to Frontline, he said: “The perpetrators come in gangs and unleash atrocities against the gullible. Twenty-five such incidents have taken place in one month across the State. The victims could not reach out to the nearby police stations because of the lockdown. So they have to depend heavily on social media to reach out to the outside world.”

Similarly, law enforcing agencies have adopted another unlawful procedure citing the spread of the virus as the reason. Kadir said that after a lot of effort, they were able to make the police file an FIR against police constable Eswaran who beat the Dalit student for wearing a shirt that had Ambedkar’s portrait on it. “He was booked under the S.C./S.T. Act and placed under suspension. But to date he has not been arrested and remanded. He is spending his judicial custody outside the prison. The police claim that since the courts are functioning with limited staff and also intermittently, the accused are not physically arrested and remanded. Besides, fresh undertrials are not encouraged in prisons due to fear of virus threat,” he claimed.

Kadir said the pandemic scare and the extended spells of lockdown have forced hundreds of intra-State and inter-State migrants of Tamil Nadu, a majority of them Dalits, to return to their native villages and towns impoverished. Many were employed elsewhere and had been sending their earnings home. A large number of youths, he said, had moved to nearby cities to continue their higher education. They came home only on vacations. However, those who own land, mostly dominant caste groups, have stayed put in villages. These local casteist forces thus despise the return of Dalits to their native places for prolonged stays. Besides, their return to their roots has disturbed the prevailing caste-based socio-economic imbalances in these villages.

Meanwhile, the cluster of infection at the Koyembedu vegetable market in Chennai has added another dimension to the caste issue in Tamil Nadu. Since most of the workers in the market are Dalits hailing from villages in neighbouring districts such as Villupuram and a few of them are infected, they and their family members face discrimination now. Shops in villages refuse to sell them essentials. Many in Dalit colonies are asked not to venture out of their houses. Villagers even refuse to buy milk from Dalits. Said D. Ravikumar, Member of Parliament from Villupuram: “Such incidents of discrimination have been reported from Elusempon and Melamangalam villages in Villupuram district. I have asked the Collector to look into the issue and redress the grievances of Dalits, especially those who have returned from the Koyembedu market.”