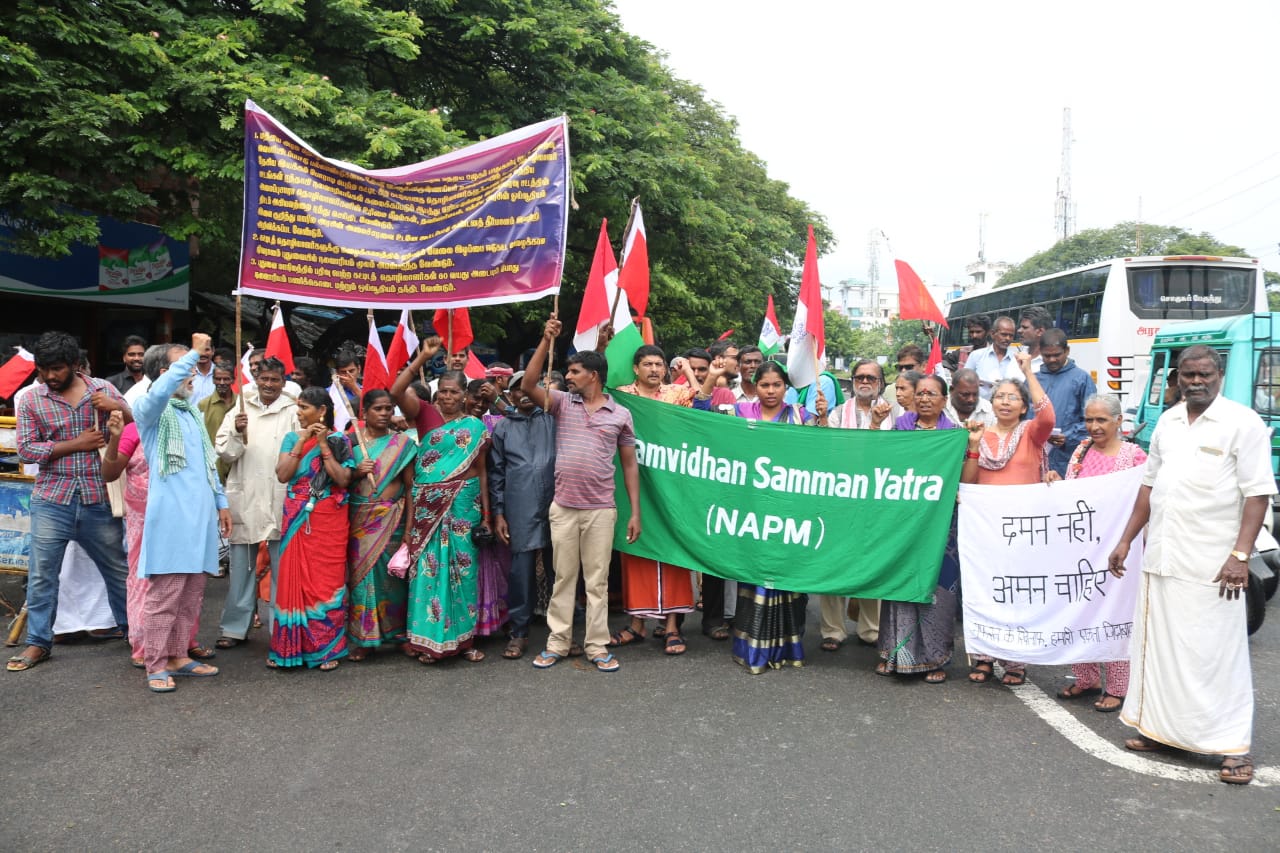 Youth of Shanmoga Nagar Basti showed the way to peace, equality, and way towards development.

Govt. trying to amend and destroy the welfare boards of Construction and Unorganized workers, Samvidhan Samman Yatra stands with the people fighting against the amendments.

Inamul Hassan from Khudai Khidmatgar talked in brief about the colony and said that Around five thousand families live in the colony. This is a resettlement colony, where people were rehabilitated after evictions from slums in the city. Since last 10 years, the colony is still facing lack of basic facilities. Youth and women are getting targeted when any crime happens in the city. Police suspect the residents of the colony as criminals and arrest them often. Since last two years, the residents have joined hands and worked hard to change the face of this area. Today, the area is equipped of all the basic facilities like well-built roads, proper drainage system, etc. A small community library has also been set up.

Sandeep Pandey from Socialist Party (India) and NAPM expressed his pleasure in joining the people of the colony and said that as the yatra is going on to bring awareness about how to protect constitutional rights. We have visited many places where social movements are happening for social change and we feel the same here in this colony. The efforts of youth and women are remarkable here. This is an achievement. It will be an example for many others. We urge the youth population to take active part in local-self Governance like Gram Sabha and Wards.

“There is need of youngsters walk with workers engaged in unorganized sector and stand united in their struggle”, said Geetha Ramakrishnan from NAPM.

Priya, a young girl from the community shared her story and said that “There are five girls in our group and everyone works collectively for the betterment of the community. During 2015 cyclone, we were involved in flood relief work. All our colleagues treat women with great respect. This needs to be replicated and understood as well by everyone in the society. We are all equal and can do wonders if not stopped.”

Prafulla Samantara echoed the views expressed by young girl and went down to the earlier time. “In 1972, when I came here for university tour and saw the respect for women here. We were proud and still proud to be associated with groups here. The commune living is an example for peace, equality, and harmony”, he said.

Vishnu, a young activist with Yatra added and said that such experiences brings changes in our lives as well. We rarely witness such collective work with so much of respect for each other. We need to learn from them and tell the people out there, who are on spree to mob lynching and spreading hatred on the basis of caste, class, religion, gender and race.

From here, the Yatra joined the demonstration on Central Codes and negative effects on Welfare Boards of Construction on Unorganized workers organised by Niramaan Mazdoor Panchayat Sangh and others.

Talking about the issues of unorganized workers, Inamul Haque said, “The Govt. is reshuffling everything, they did not leave the labour welfare board as well which works for the welfare of workers. The Modi govt. is trying to bring new laws which are completely unjust and exploitative. Our question is why Govt. is grabbing land, when they promised livelihood, people are asking for their rights and the Govt. in turn trying every measure to strangulate them. They are killing small fisherpeople. Now we won’t let them amend labour board. We will fight till we get out rights intact.

Narayan Swami, a leader from Nirmaan Mazdoor Panchayat Sangh said, “The Central Govt. is trying to amend all the boards. The Labour board provides security to workers and by amending it will affect the lives of not only workers but their families as well. Which will devastate a large population in the Tamilnadu.”

“We fought for Welfare Board and now we should resist any efforts against its original intention. We will not let it get amended.”, said Geetha Ramakrishnan.

Meera Sanghamitra shared the objective of Samvidhan Samman Yatra and assured the struggle of required support.

In the afternoon, the Yatra reached Cuddalore district, there are chemical industries affecting about 50 villages in the district. The major land acquisition is done by SIPCOT (State Industries Promotion Corporation of Tamilnadu Ltd). A major chunk of land that is being acquired in the name of SIMA (South Indian Millers Association). They have acquired about 250 acres of land however their requirement is more than 400 acres of land. The area is already under severe pollution and it is also ranked 3rd in the Comprehensive Environment Pollution Index (CEPI) which is a study done for understanding the extent of pollution by Central Pollution Control Board. So, in the CEPI index, Cuddalore stands at No. 3 after two industrial estates of Gujarat. The area is also very rich in farming, the soil is very fertile. However, the land acquired by SIMA is still under-utilized. Most of the land is compounded but not used. There are not many industries in the area. It seems more like a land scam than a planned industrial development.

The village Periyapattu where a team of activists travelling with the Yatra met People’s Committee for Protection of Livelihood. The activists and leaders of the committee apprised us of the pollution ordeal that they are facing. On field visit we could also see the leakage and seepage of industrial effluents on to the field of farmers. There is a pipeline which goes into the sea to release the effluents. The local committee has been struggling against the pollution and the land grab since last decade.

The major issues raised by local committee members were that they have already lost much of their land under the SIPCOT scheme of industrial development. Whatever land is remaining with us is being polluted by release of effluents. Ground water has also got polluted and its colour has changed. Pollution is rampant and the inaction by local pollution control board and other responsible agencies.

The land which remains unutilized is being contested by local people that our land for paltry and now it is remaining unutilized since last few years. The local committee was very encouraged by presence of NAPM leaders, Prafulla Samantara from Odisha, Sandeep Pandey from Uttar Pradesh, Suniti SR from Maharashtra, and Krishnakant from Gujarat. NAPM leaders assured the committee leaders of full support in all the required manner and also suggested that the farmers should take possession of land because it is still being unutilized which is a waste of resources even for the country.

For details about Samvidhan Samman Yatra, check our website www.samvidhanyatra.wordpress.com

We are standing at crossroads and passing through a critical juncture in India’s history and have a historical responsibility to save and salvage the ethos of this country, to fulfill the dreams of social, economic and political justice that Dr. Baba Saheb Ambedkar envisioned. There is an overwhelming urgency to come together, beyond diversity of perspectives, to safeguard the constitutional values and principles of humanity, based on social justice, liberty, equality, fraternity, scientific and rational thinking in the social psyche to deal with all these political, economic, social, cultural challenges. The need of the hour is to create understanding and tolerance in society, by peaceful, democratic and constitutional means. It is equally vital to aim for economic equity, social parity, environmental protection, sustainable development, establishment of people’s rights over access of resources and annihilation of caste and patriarchy.

It is with this urgency and spirit that National Alliance of People’s Movements (NAPM) has, after numerous discussions,  planned to embark on a Samvidhan Samman Yatra – a nationwide tour to restore and protect the core values of our Constitution and democracy, at a time when there is an all-out attack on the Constitution, people’s rights, livelihoods, environment and the spirit of diversity in the country, even as massive scams, resource loot and dilution of laws are taking place and farmers, workers, students, employees, women, dalits, adivasis, muslims all are on the streets asserting their rights, spaces and freedoms.

Yatra shall travel more than 25000 Kms through 26 states in 65 days holding meetings, discussions, public events, supporting struggles, sharing grief of victims of the violence and hate and spreading message of plurality, love, peace and social justice. The Yatra shall culminate in a Manvadhikar Rally and Jan Sansad in Delhi on 10th December, 2018, the International Human Rights Day.