Holding His Ground Against the Sand Raiders of Tamil Nadu

S. Mugilan confronts the state’s mining mafias, even as officials and activists lose their lives in defence of its rivers and beaches. 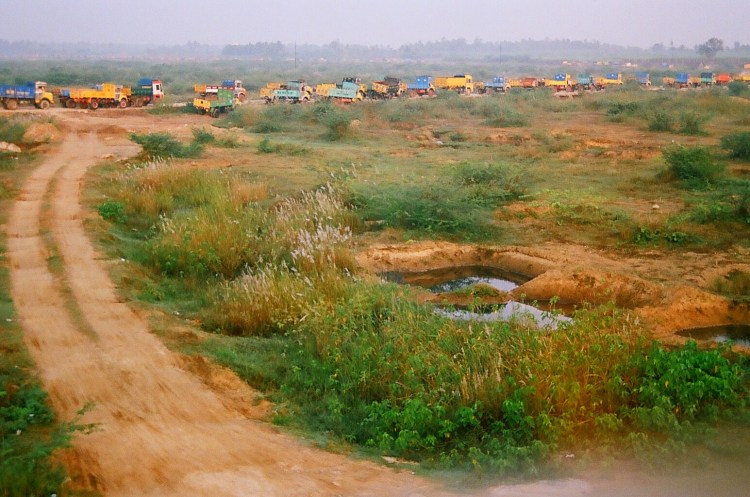 Chennimalai, Tamil Nadu: On a night in November 2008, S. Mugilan and a few of his friends headed home from putting up posters around the town of Namakkal. Their posters demanded that the government shut down a paper factory that had allegedly polluted 10,000 acres of land in the district.

It was 3am when they found themselves surrounded by about 70 men armed with kadaparais (crowbars) and aruvals (curved machetes). The gang left Mugilan and his comrades with injuries which required weeks of hospitalisation. The attackers were never identified, though Mugilan presumes they were hired by the factory owner. Still, Mugilan triumphed. Four months later, the factory was closed. Since then, Mugilan says, all large factories in the district implement pollution controls. 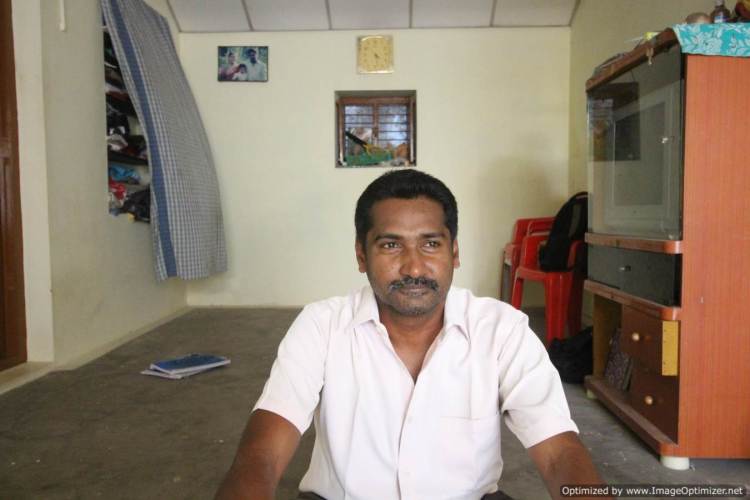 Mugilan, now 49, has taken on polluters in Tamil Nadu for more than two decades. He has had victories: shutting down a Coke factory in Perundurai, closing a polluting textile-dyeing plant in Erode, and organising major protests against a nuclear power-plant on the coast. In one especially shocking case, he helped expose granite miners who tried to shore up business by offering narabali – human sacrifice.

He has had many failures, too, and the one struggle which is always ongoing – his fight against Tamil Nadu’s sand-mining mafia.

At his modest home in Chennimalai, a temple-town on the banks of the Noyyal River, Mugilan explained how he left his job as an engineer in the state public works department (PWD) to begin a life as an activist. That was in 1995, when a textile-dyeing factory in Erode was found to be polluting the Noyyal. 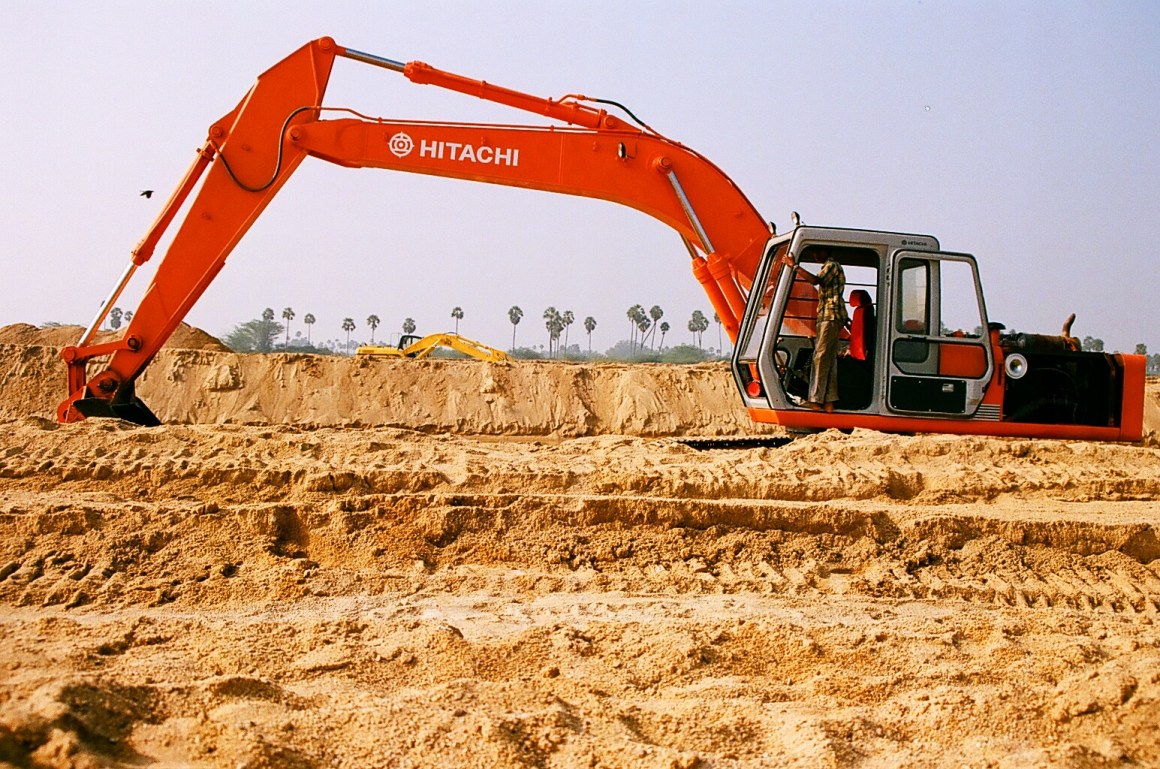 “Things came to a head when a schoolgirl went in the river to bath and came out with skin burns,” Mugilan said. “We collected ten lakh signatures asking for the factory to be shut, and collected one rupee from each person who signed. We organised large protests in Erode town as well. Finally the authorities woke up and shut the factory. This victory, after three years of incessant effort, was a great learning experience.”

It was around this time that Mugilan faced his first confrontations with the sand-mining mafia. Tamil Nadu has the second-longest coastline of any state in India, stretched over 1,076 kilometres. Ninety-five rivers cut across it, and at least 17 major river-basins fall within its borders.

All this river and beach sand was not too heavily exploited until the real estate boom of the 1990s, which increased demand for sand exponentially. The state government estimates that between 5,500 and 6,000 truckloads of sand (each about 200 cubic feet) are mined in Tamil Nadu every day. Mugilan puts the number much higher – at 90,000 truckloads or more. He also disputes the PWD claim that the market rate for sand is Rs 7,000-8,000 per truckload, saying it is actually Rs 20,000-Rs 30,000, and much more when trucked out of state. 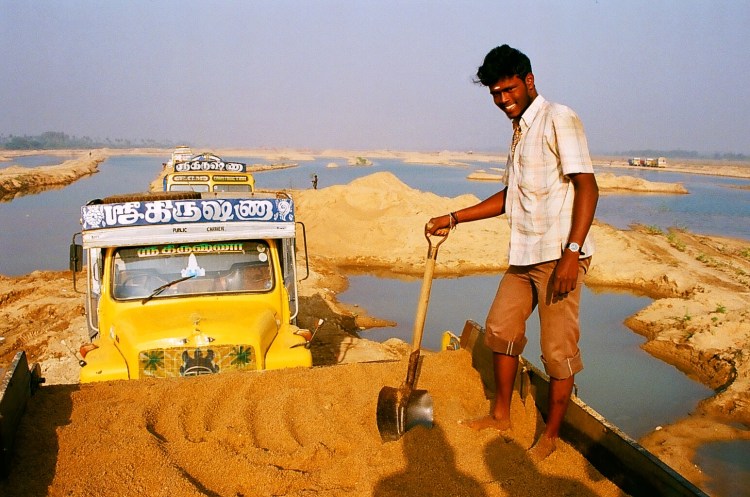 This adds up to tremendous profits, through rampant and often illegal sand-mining. State laws prohibit the mining of more than five vertical feet of sand, and the Ministry of Environment, Forest and Climate Change stipulates that mining in many quarries only be done manually. Yet heavy equipment, like sand mining dredges is commonly used. Mining has led to major rivers, such as the Thamirabarani and the Palar, sinking 30 feet below ground level.

“The sad reality is that the mining stops only when the sand has been completely extracted,” said Mugilan. “So when the monsoons come along, there is no sand to retain water in the rivers and it flows straight to the sea, as if through a hose. The groundwater levels keep dropping, and the once-glorious river systems, which were the lifeline for the state’s agriculture, are in pathetic condition.”

The reason rampant, illegal sand-mining continues, Mugilan alleges, is because of the complicity of state politicians. “For every truckload that is mined, legal or illegal, we estimate that Rs 200 goes to a close aide of the chief minister,” he said. That would work out to more than Rs 1.8 crore to that aide alone, every day.

In his 2014 book, Thathu Manal Kollai (The Stealing of Beach Sand) Mugilan claims that the state’s biggest miner of beach sand is S. Vaikundarajan, the chairman of VV Minerals, India’s leading exporter of industrial minerals. Among other interests, Vaikundarajan also owns a Tamil news channel, and has close ties to ministers in the ruling party, the All India Anna Dravida Munnetra Kazhagam. In 2013, his name appeared in an investigation into illegal sand mining in Tuticorin district, which is worth Rs 96 thousand crore, according to the Economic Times.

Mugilan says there is so much money in sand that regulation is practically futile. The officials tasked with preventing illegal mining are in the third or fourth tier of the bureaucracy, such as village administrative officers (VAOs) and revenue department (RD) officials. But illegal miners can deal directly with politicians and officials at the top.

“VAOs and RD officials who are supposed to act against the illegal miners are either paid off or – if they turn out to be honest – targeted through other means,” Mugilan said. 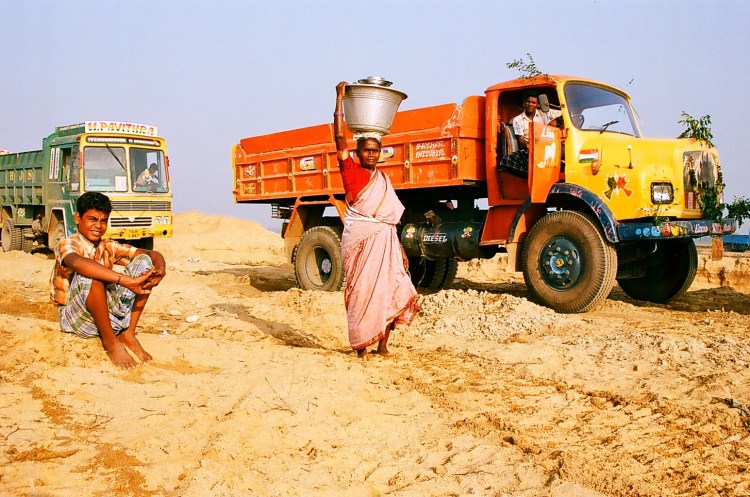 A local women sells food to the truck drivers who are in queue. Kanchipuram, Tamil Nadu. Credit: Sibi Arasu

While small-time miners are routinely arrested, he added, the “big fish” are allowed to continue unchecked, or even assisted by state officials. “To oppose them would be career suicide, and in extreme situations, even life threatening.”

Although it is poorly documented, anecdotal accounts and scattered reports indicate that numerous activists and government officials in Tamil Nadu have been injured or killed for opposing sand and granite-mining mafias.

A report in Frontline details how an 81-year-old retired teacher, Sam Devasagayam, was hacked to death in 2014 while campaigning against illegal sand mining in the Thamirabarani River. The same year, a 43-year-old police constable, G. Kanakaraj, was run over by a truck carrying illicitly mined sand. A government official and four colleagues also survived being rammed by a truck carrying sand. Two years earlier, 24-year-old Satheesh Kumar was standing guard against sand mining in the Nambiyar River when he was killed by a speeding truck. In Madurai district, a farmer’s hand was chopped off for refusing to part with his land for granite mining. These cases are just a few of the many more recorded and unrecorded deaths and injuries. 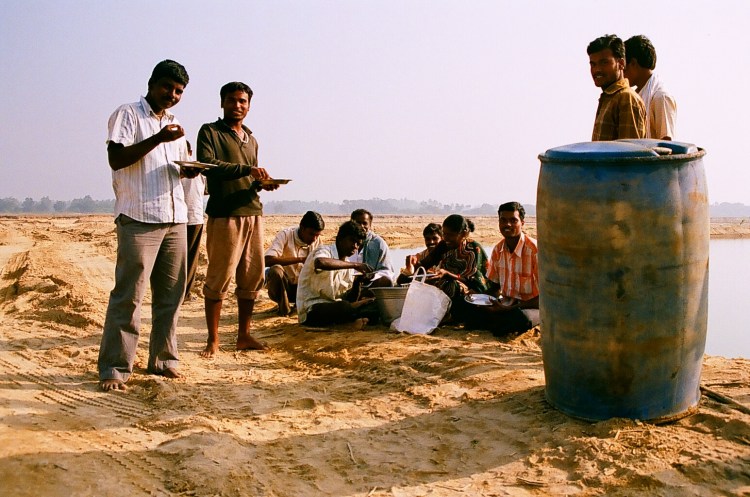 It can take up to three days for a truck to reach the front of the queue, load sand and take off. Kanchipuram, Tamil Nadu. Credit: Sibi Arasu

“I can think of at least four government officials who have been killed because of their stringent positions against sand mining in the last decade or so,” anti-sand-mining activist S. Amudhan told The Wire. “Most of the attacks are attributed to negligent driving or road accidents. The connection between their efforts to curb sand mining and their deaths are hardly ever laid out.”

Mugilan said he knows of at least 20 people, including activists, villagers, and officials, who have lost their lives over sand and granite mining. “These deaths are seldom reported since the regional journalists too are targeted. When the entire system is in their [the mining mafia’s] hands, it’s sometimes difficult to get the word out,” he said.

It is not just opponents of illegal mining who have lost their lives, either. Last year, a state government probe into a granite quarry in Madurai district found that at least 12 people had been offered as narabali there. The victims appeared to be mentally challenged people abducted from neighbouring regions in Tamil Nadu and Andhra Pradesh, and used as human sacrifices between 1999 and 2003. The exhumed remains included one of a small baby. The owner of the quarry, a granite baron named P.R. Palanichamy, was found to have ordered the sacrifices, allegedly to improve business.

In 2012, U. Sagayam, the district collector in Madurai, had blown the lid off 175 granite quarries that Palanichamy and his firm, PRP Granites, were running illegally. Sagayam’s investigation, done with the assistance of Mugilan and other activists, estimated that PRP Granites illegally mined Rs 16 crore worth of granite across the District.

Within days of submitting his report, Sagayam was transferred out of the district. He now serves as vice-chairman of a state-run initiative to promote research in science and technology — a huge demotion from the position of Madurai district collector. In September 2014, however, the Madras high court appointed Sagayam as a special officer to investigate mining in the state. It was this probe that uncovered the human sacrifices.

Having witnessed situations like this, Mugilan has gotten used to the threats on his own life, and to his family. “My wife now just says ‘You can do what you want,’ when someone calls to threaten us,” he said. “Both she and my son accept that what we’re trying to goes beyond just our family. We are fighting the greatest monopolies and power-mongers in our region. Threats are inevitable. The point is to keep on going.” 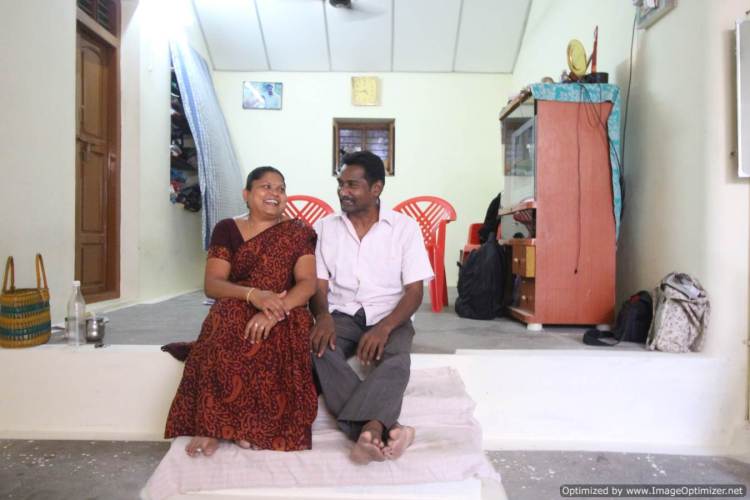 After the massive protests against the coastal nuclear power plant at Koodankulam, Mugilan was charged with sedition and imprisoned for four months. It made him a prominent face of environmental movements in Tamil Nadu. Now, he says, any direct attack on him will not go unnoticed by media and civil society.

“So the way I see it, the only reason people like Vaikundarajan have let me be is that if something happens to me, he’ll be held directly responsible. It really can’t be anything else,” Mugilan said.

What keeps him fighting is his leftist ideology and his surprising optimism about the future. “For me an environmental issue is not just about saving the environment,” he said. “I feel that causing damage to land and natural resources is an attack on the Tamil people as much as on its ecosystems.”

“When I was growing up,” Mugilan recalls, “We could take the water right out of the Noyyal River and drink. We used to play in the river for hours, spend so much time there. My son can never experience that. But through our efforts, maybe we can bring the region back to how it was, or at least a semblance of it.”

Sibi Arasu is an independent journalist based in Chennai. He tweets @sibi123. A version of this article first appeared on mongabay.org.