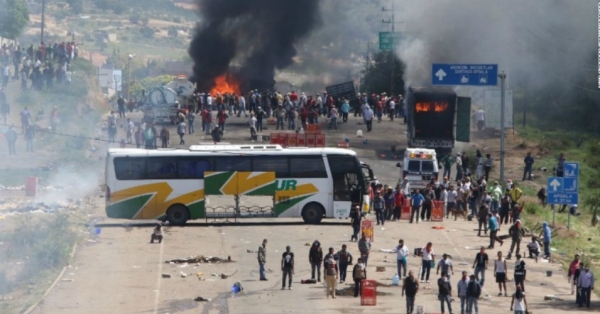 According to TeleSUR, teachers from the dissident union, Coordinadora Nacional de Trabajadores de la Educación (CNTE), “had set up the blockade as part of protests over an education reform implemented by President Enrique Peña Nieto and the arrest of several of the unions’ leaders over the past week,” which they said, were politically motivated.

With scant reporting, much of the details of the have emerged on social media, including reports that police attacked an elementary school being used as a makeshift clinic to treat the more than 100 wounded.’ Read the report of police violence here.

Following on the massive police attack and firing on the teachers protest in Oaxaca last Sunday, anti-government sentiment is reported to be mounting. Another report states:

‘Since then, two high level government officials from that state, Oaxaca Minister of Indigenous Affairs Adelfo Regino Montes and Secretary of Labor Daniel Gutierrez, have resigned in protest of the “authoritarian actions that repress and kill Oaxacan people who defend their rights and the government’s negligence to any possibility of dialogue,” as Gutierrez put it….

The government violence has also been criticized by the National Indigenous Congress (CNI) and the Zapatista National Liberation Army (EZLN), which issued a joint communique on Monday blasting the “cowardly police attack,” and assuring the teachers, “you are not alone.”

“We condemn the escalation of repression with which the neoliberal capitalist reform, supposedly about ‘education,’ is being imposed across the entire country and principally in the states of Oaxaca, Chiapas, Guerrero, and Michoacán,” the missive states.

“We call on our peoples and on civil society in general to be with the teachers who resist at all times, to recognize ourselves in them,” it continues. “The violence used to dispossess them of their basic work benefits with the goal of privatizing education is a reflection of the violence with which the originary peoples and rural and urban peoples are dispossessed.”‘Read the full report here.

ANGUISH of A MOTHER about the insensitivity of POLICE, MEDIA and society in getting justice to her d...
Will Ambani have the last laugh? Or why the AAP needs a small lesson in Marxism
J&K Beef Ban Violates Article 370/Special Status of the Valley
British Tamils protest outside Vedanta chief Anil Agarwal’s home in London #BanVedanta #mustshare