Telangana CM attends 3rd wedding this week, but has no time to meet rape victim’s family 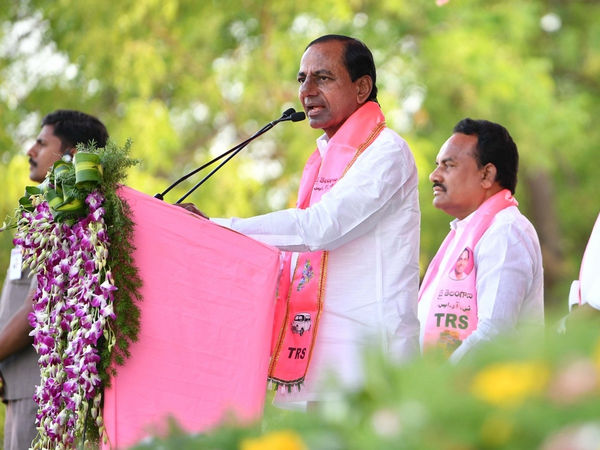 In a shocking incident, a veterinarian was allegedly gang-raped and killed by four men near a toll gate in Shamshabad on the outskirts of Hyderabad on the night of November 27.

Hyderabad: It seems Telangana Chief Minister K Chandrashekar Rao aka KCR has got his priorities completely wrong. As the nation boils over the gruesome gang-rape and murder case of a woman veterinarian in the state last week,KCR is busy attending high-profile weddings.

While there was no let-up in protests over the horrific incident that sent shivers down the spine, it is being reported that the Telangana CM is attending the third wedding this week. Rao has not met the family of the victim as yet.

The Telangana CM was in New Delhi two days ago to attend a marriage. Today, the CM will go to Nagole, Hyderbad, to mark his presence at yet another wedding ceremony.

While speaking to Times Now on Tuesday, the father of the victim had said that politicians belonging to almost all political parties have visited his residence but wondered why the Telangana CM had not found the time to meet the grieving family. “He (KCR) had no even telephoned them,” said the father, adding the CM’s visit would have given the justice-seeking family some assurance.

Earlier today, the Hyderabad Police had detained women rights activist Trupti Desai as she tried to stage a protest outside the official residence of the Telangana Chief Minister, seeking capital punishment for those involved in the gang-rape and murder of the woman veterinarian.

The founder of Bhumata Brigade, along with some other activists, reached Pragati Bhavan, the official residence of the CM in Begumpet area, to meet Rao. However, she was not given permission as they had no appointment.

Desai and other activists tried to stage a sit-in protest but were whisked away in a waiting police vehicle.

In a letter to the Telangana Chief Minister, Desai slammed KCR for not contacting the family of the victim. She mentioned that Rao had time to visit New Delhi to attend a wedding but had no time to meet and console the parents of the victim in Hyderabad.

The veterinarian was allegedly gang-raped and killed by four men near a toll gate in Shamshabad on the outskirts of Hyderabad on November 27. As per the Telangana Police, the accused then burnt the body near Shadnagar town in neighbouring Ranga Reddy district.

Police arrested all the four accused on November 29. The case has sparked huge protests across the country. On Tuesday, the software employees of various Information Technology companies in HITEC (Hyderabad Information Technology Engineering Consultancy) city, took out a protest march near Mindspace IT Park.

They were holding placards with slogans like ‘Hang the rapists’ and ‘We want justice’.

'Himmat' during the Emergency: When the Press crawled, some refused to even bend
#India - Ram Jethmalani and the defense in Asaram sexual assault case #Vaw
I'm vegan, I work for animal rights and I oppose Maharashtra's #BeefBan
Karnataka Govt Quietly Scraps Green Panel #WTFnews