Hyderabad: A local level leader associated with the BJP in Telangana‘s Nizamabad district forced two dalit youths to take a dip in dirty water for trying to stop illegal quarrying of mud from local lake.

This happened in Abhangapatnam village of Navipet block about a month ago but came to light on Sunday. However, the victims were reluctant to lodge a complaint with the police fearing consequences. The victims have been identified as Rajeshwar and Lakshman, both belonging to Madiga sub-caste under scheduled castes.

Nizamabad rural police inspector confirmed to Mirror that the incident had taken place but no case was registered due to the victims’ refusal to complain.

“We are sending our men again to persuade the victims to file a complaint,” the inspector said. 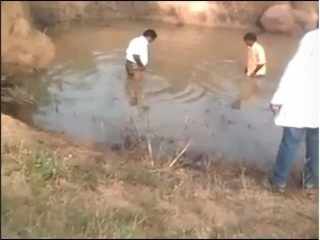 HYDERABAD: A 43-year-old man allegedly threatened and abused two Dalit men and made them to enter a small pond in Nizamabad district of Telangana, police said today.

The video of the purported incident, which took place at Abhangapatnam village in Navipet mandal of the district in September, has gone viral on social media and being highlighted by television channels.

“Based on the complaint, a case under IPC section 506 (criminal intimidation) and under relevant sections of Scheduled Castes and the Scheduled Tribes (Prevention of Atrocities) Act was registered against one Bharat Reddy, a local businessman who allegedly threatened and abused the two agricultural labourers in filthy language,” the SI told PTI over phone.

Police’s preliminary investigation revealed that Reddy was getting gravel transported and had engaged a tractor for the purpose. However, the duo had allegedly stopped the tractor, which left Reddy fuming, following which he abused and threatened them.

The video shows a bearded man holding a stick and threateningly asking the two men, who are folding their hands (apparently requesting him to spare them), to enter the pond as a “punishment”. The man is heard using filthy language against the duo.

The video also shows the two men get into water and take dips even as the bearded man continues to hurl abuses against them.

“None of the two victims have lodged a complaint with police in this connection,” the police official said.

Police are in the process of questioning Reddy.

When asked about the television reports, which claimed that the accused is linked to BJP, the police official dismissed reports.

Meanwhile, referring to the incident, Telangana BJP said it strongly condemns “misrepresentation” by sections of the media on the viral video.

“The individual exhibiting barbaric and unacceptable behaviour in Nizamabad on Dalits is not a BJP leader, nor does he hold any position in the party at any level,” the party said in a statement.

“BJP Telangana will consider legal options against those, who are indulging in blatant misrepresentation,” it added.

According to information available, Rajeshwar and Lakshman tried to stop vehicles carrying mud dug illegally from local Errakunta lake. The vehicles are said to be of Bharat Reddy.

The duo objected to digging of mud from the lake without permission and its transportation without paying royalty to the village development committee.

Bharat grew angry and took Rajeshwar and Lakshman to a dirty water body, which is said to be used by people resorting to open defecation and forced them to take a dip in it. The video shows the youths begging his pardon but for no use. Bharat is heard using filthy language at the victims.

Since the water is less than three feet, the youths could not immerse completely. But, Bharat insisted that they should take a complete dip. Not only his men videograph the eptbut he also clicks pictures on his mobile.

“We have seen the video and immediately sent our men to the village to identify the victims and get a complaint from them. Since victims are scared, our sub-inspector will personally go now,” the inspector said.