The By-election Results in Bihar and Punjab

Out of total 18 (assembly) seats for which elections were held this time round, within the so-called “honeymoon period” – i.e. within 100 days of coming to power, enjoyed by the Modi government, 10 were in Bihar, 3 each in Madhya Pradesh and Karnataka, and 2 in Punjab.

In Punjab, the Cong. gets 1 and the SAD (BJP ally) 1. Unchanged from the last time. The AAP has performed way worse compared to its performance in the last LS poll

The BJP-LJP combine’s poor showing in Bihar compared to its performance in the Lok Sabha elections just three months back is not just because of the opposition coming together. There has also been a substantial erosion in the saffron alliance’s vote share from 45.3% in these 10 assembly segments in April-May to 37.3% now, a drop of eight percentage points.

Given the more or less bipolar nature of the latest contest, it is hardly surprising that such a significant swing in votes would lead to a dramatic reversal of results in just three months. Thus, while the BJP-LJP led in nine out of 10 segments in the Lok Sabha polls, they had to settle for just four this time round. 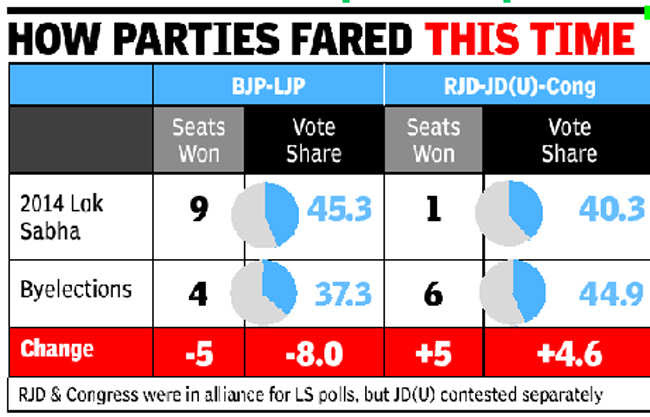 Just an adding up of RJD, Congress and JD(U) votes would not have been sufficient to achieve this result. In eight of the 10 assembly seats, the BJP-LJP combine had polled more votes in the LS elections than the combined tally of the newly formed RJD-Congress-JD(U) alliance. The only exceptions were Narkatiaganj, where the Congress had led (ironically, one of the four won by the BJP now) and Mohiuddinnagar, where the BJP led the RJD by about 8,600 votes but the JD(U) had polled over 14,000.

In terms of seats won, the bye-election results are also worse than the 2010 assembly election verdict in these seats for the BJP. Four years ago, the BJP had won six of these 10 seats and its ally at the time, JD(U), had won one, with RJD winning the remaining three.

In terms of vote share, however, the BJP has gained in a big way over these four years, with its own share going up from 24.1% in 2010 to 34.3% now. Including its respective allies in the two different elections also presents a similar picture. The BJP-JD(U) had polled 30.5% of the votes then whereas the BJP-LJP now have notched up a 37.3% share.

Given the fact that these 10 seats are in areas where BJP has traditionally been strong – it contested eight of them 2010 leaving only two for JD(U) and nine of them this time round leaving just one for LJP – the erosion in vote share between April-May and now would give party leaders reason for concern about the prospects in the larger electoral arena of Bihar.

When almost the entire country rejected the Aam Aadmi Party (AAP) in the parliamentary elections, Punjab went against the tide and gave the new-born party its electoral debut in the Lok Sabha with four seats.

Speaking on the loss AAP leader H S Phoolka said, “The Akalis and Congress have won on the virtue of money power and drugs. We are not discouraged by the result. We wanted to offer clean politics to the people and it is up to them to take the alternative.”

The AAP party’s candidate Dharamvira Gandhi, a cardiologist, won the recent Lok Sabha polls from the Patiala parliamentary constituency by over 20,000 votes. He defeated Preneet Kaur, a three-time MP from this seat, and the Congress candidate.

But in the by-election in Patiala, the voters completely rejected the AAP. In the Lok Sabha polls, the AAP had got over 34,000 votes from the same assembly segment. In just three months, the AAP tally came down to less than 6,000 – clearly indicating that voters were disillusioned with the way the party was doing things at the national level and also in Punjab.

For the Talwandi Sabo seat, the AAP created controversy over naming of its candidate. It first announced singer Balkar Singh as candidate but changed him soon after with Baljinder Kaur. An upset Balkar Singh contested the by-poll as an independent candidate. Both lost their security deposits on Monday.

AAP chief Arvind Kejriwal had also campaigned for the candidates but that appears to have had no impact in the elections.