The communal mood in UP is turning ugly 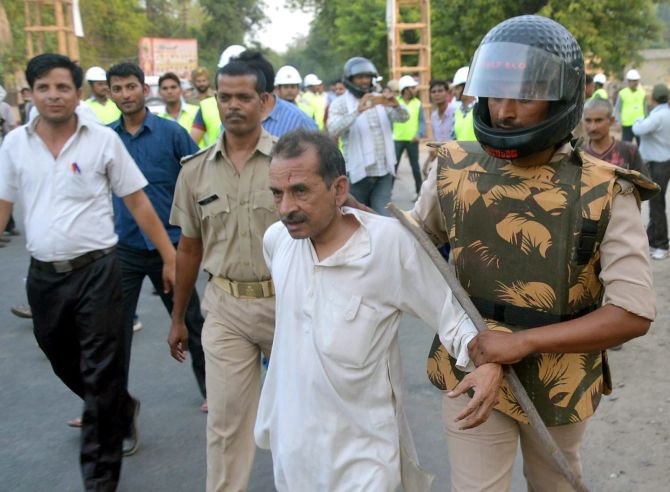 When vote-hungry parties appear to gain power only through communal polarisation, do we see any possibility of an end to this violence? asks Mohammad Sajjad.

In news reports on the Bijnor communal violence of September 17, 2016, as also in most of the recent instances of such violence in UP, Bihar, and Haryana, we have noticed a politics of invisibilising the subaltern identities of the Muslim victims, and reporting it only in terms of their religious identity.

Already, an atmosphere of communal tension has been prevailing in most parts of Uttar Pradesh. In the Muzaffarnagar communal violence of August-September 2013 the victims (killed and displaced) belong mostly to the poorer class of Pasmanda Muslims engaged in artisanal occupations.

It occurred when the first phase (ending on September 30, 2013) of the ‘Pasmanda Kranti Abhiyan’ (founded in 2012) was underway in the area, with the slogan, ‘Dalit-Pichhrha Ek Samaan-Hindu ho ya Musalman.’

In the Dadri lynching of September 2015, the victim, Mohammad Akhlaq, was from the carpenter (Saifi) community of Muslims. He had recently bought a car; a son was employed in the Indian Air Force, another was preparing for the civil services. All this did not go well with the people around him, who had grown envious of him.

One village headman, Ilyas, had organised them into ‘syndicates’, or ‘cooperatives’, to sell these in the adjacent Nepal markets. The Lalu Yadav regime never made public the S R Adige inquiry report into the Sitamarhi riots nor did the Muslim leadership of any hue ask for it.

In the Azizpur, Muzaffarpur, Bihar riots of January 2015, the victims were Pasmanda Muslims.

Even though the immediate spark in Bijnor, on September 17, 2016, was eve-teasing, tension was already simmering on the right to use pond water in Pedda village, just four kilometres away from Bijnor town.

Usually such contracts are given to the community of kumbhars (potters), singharias (the community that grows water chestnuts, singharas), and dhobis (washermen). This year, the contract was given to Muslim dhobis by the state government while the pond was under the occupation of Hindu Jats.

The Bijnor violence looks like a case of spectacular violence carried out by the Jats in order to ward off the Muslim dhobis from claiming their rights to the pond.

Haseenuddin, Sarfaraz and Ehsan (differently abled) were all Pasmanda Muslims of the dhobi community of a particular family.

Some local sources say a Jat hegemon was trying to forcefully occupy a piece of land owned by this Muslim family as they were refusing to sell it to him.

These two aspects, which could be the genesis of the conflict and eventually accentuating into violence, have remained almost completely unreported.

This suppression of the caste identity of the victims is becoming irksome for some Pasmanda intellectual activists, who are also angry with their own political leaders and intellectuals who are not raising their voices against this specific aspect.

An altercation on eve-teasing may not always turn into gruesome communal violence unless some other factors of tension did not already exist.

At the moment when elections to the Uttar Pradesh assembly are due next year, any minor scuffle acquires the saliency of escalating into large scale group violence.

Uttar Pradesh, under the dispensation of Akhilesh Yadav since 2012, has seen tremendous communalisation.

Even before the Muzaffarnagar riots of August 2013, in some instances, the ruling regime, by some of its actions, indicated that there were some wilful attempts at communalising the province.

The Samajwadi Party, by creating religious polarisation, probably intended to wean Muslim votes away from non-Bharatiya Janata Party political formations like the Bahujan Samaj Party, the Congress and the Indian National Lok Dal.

If it really did intend so, then the Samajwadi Party must not lose sight of the fact that the biggest beneficiary of the politics of communal polarisation will eventually be the BJP.

In a comprehensive study of communal riots, Yale University researchers assert that ‘riots produce ethnic polarisation that benefits ethno-religious parties at the expense of the Congress’ and ‘the BJS (the Bharatiya Jana Sangh, the BJP’s parent) saw an 0.8 percentage point increase in their vote share following a riot in the year prior to an election.’

In 1989, the BSP’s Mayawati won the Bijnor Lok Sabha seat by a narrow margin, by working out a Muslim-Dalit alliance, leaving out the Jats and other Hindus like the Rajputs, Gujjars, Banias who were leaning towards the BJP.

Subsequently, in 1991, the BSP performed well in the Bijnor assembly seat, securing 41% of votes, even though it lost to the BJP.

Of the 8 assembly seats in the Bijnor district, four seats are currently with the BSP, 3 with the Samajwadi Party, one with the BJP.

There could be a possibility that the ruling Samajwadi Party may fear a repeat of a Muslim-Dalit alliance for the BSP in the 2017 assembly election. The Bijnor violence should be seen against this backdrop.

While going to school, it has been reported that two Muslim girls were teased by Hindu Jat boys on September 17, 2016. The boys are said to belong to the family of a Jat hegemon in the village.

When the girl’s family went to the Jat hegemon’s home to complain about the eve-teasing, they were fired upon from the roof of the fortified house. One member of the girls’ family was killed on the spot.

The next morning, a mob of around 100 people attacked the girls’ home. Seventeen members of the Muslim family were injured in the violence. Three of the injured died later and a fourth, with bullet injuries in his neck, has been admitted to New Delhi’s All India Institute of Medical Sciences.

In all, four people, including a woman, were killed in the violence.

The fact that all the deceased and the injured belong to one family is proof that the girls’ family had only gone to beseech the elders of the deviant boys to rein them in, rather than a communal mobilisation on the issue.

The armed mob at the Jat hegemon’s home indicates a certain degree of pre-planning of the violence. The Muslim villagers allege that the village pradhan and a local illegal arms dealer were complicit in the killings.

The Muslims allege that the sequence of events was not the outcome of what happened on that Friday morning. Rather, by all indications, it was pre-planned to create an atmosphere of communal tension in the village and the area.

,font size=7>They also allege that some policemen were hand in glove with the killers as they were present at the scene when the firing started. Also, the police did not answer around 12 phone calls made by a villager, Anis Ahmad, to the police control room during the attack, around 8 am.

Ahmad also called Ruchi Veera, the Samajwadi Party MLA, who also did not answer the call. After the incident, Veera is said to have curbed further outbreak of the violence. The MLA was also instrumental in securing compensation for the victims’ families: Rs 20 lakhs (Rs 2 million) for each death.

Even the amount of compensation has becomes a factor in polarisation. An amount of Rs 20 lakh has come to be seen by the saffron forces as ‘appeasement’ of Muslims by the ruling regime in Uttar Pradesh.

Anis Ahmad, 38, is an alumnus of the Deoband seminary. His ‘conservatism’ or ‘orthodoxy’ is reflected in his sartorial manners. Anis was earlier a tailor in Kuwait. He is now a ‘dress designer.’

Having improved his economic lot, he took recourse to politics and got his wife elected as the village headwoman of Gokalpur, near Pedda.

Overall, the Muslim washermen of the village have diversified their economy by using washing machines for commercial uses, by working as tailors, as barbers, as fruit and vegetable sellers, automobile mechanics, and other artisanal practices.

Enough indications from the ground reveal that the economic upward mobility of the Muslim dhobis did not go down well with the well-off Hindu Jats of the area.

As Muslim dhobi girls have taken recourse to modern education, it has become a matter of disdain, scorn and jealousy for the Jats.

Across UP, a very high percentage — 31% — of the success of Muslims in rural and urban local bodies may also create heartburn among a section of Hindus.

In the UP assembly, 69 out of 403 MLAs are Muslims. This has further contributed towards overall growing anti-Muslim animosity.

Even though Bijnor is generally regarded as an island of communal peace, it suffered huge communal violence in October 1990. Till 1990 Bijnor did not suffer from any communal violence, not even during the worst periods of the Independence struggle and Partition. Very few Muslims migrated from Bijnor to Pakistan.

In Bijnor town, around 49% of the population is Muslim. They constitute 57% of the total population in the three largest towns in Bijnor district: Bijnor, Nagina and Najibabad.

Overall, there has been a history of Jat-Muslim tension in Bijnor, in 1983, and in 1990, on the issue of eve-teasing.

More particularly, Mundahla (a Muslim-dominated village), and Suaheri (a Jat-dominated village) have a history of mutual tension. Some indications of anti-Muslim hatred among the Bengali Hindu refugees, who settled in the 1960s in Bijnor, were found during the 1990 riots.

Patricia Jeffrey studied the Bijnor riots of 1990 and observed that one of the probable reasons why Bijnor remained largely peaceful till the late 1980s is: ‘Hindus and Muslims do occupy very different economic niches in Bijnor, with wholesalers and traders in the more valuable products (jewellers, groceries) more likely to be Hindu, and labourers and traders in the cheaper products (fruit and vegetables) more likely to be Muslims.’

‘The only substantial organised industry is the local sugar factory, where the management is predominantly Hindu and the labour is mostly Muslim,’ Jeffrey noted. ‘But class or other economic interests have not hitherto fused with religious allegiance to intensify local disputes.’

But all this has started changing in recent decades. The artisan class, the Pasmanda Muslims, have gained upward economic mobility by diversification of their artisanal economy, and also by remittance from Gulf money, with which the new generation has started taking to modern education.

Further, their inclusion into the OBC category has helped them find public employment. Contrast it with the Jats whose struggles to be included as OBCs remain unfulfilled.

The overall status of Pasmanda Muslims has improved. This is reflected in their enhanced representation in the rural and urban local bodies of Uttar Pradesh.

Almost every third seat (over 31%) in urban local bodies is represented by Muslims.

In the urban local bodies (2012), ‘the highest Muslim representation (53.5%) is in Ruhelkhand where Muslims account for 34% of the population.’ Bijnor falls in the Ruhelkhand area of Uttar Pradesh.

Sadly, India is witnessing a resurgence of more and more religious strife. The need of the hour is to strengthen the criminal justice system to punish the rioters and bring about deterrence against the sickening recurrence of such hatred and violence.

When vote-hungry political parties appear to gain power only through violent communal polarisation, a concerted assertion from civil society is badly needed.

Mohammad Sajjad, who teaches history at Aligarh Muslim University, is the author of Muslim Politics in Bihar: Changing Contours and Contesting Colonialism and Separatism: Muslims of Muzaffarpur