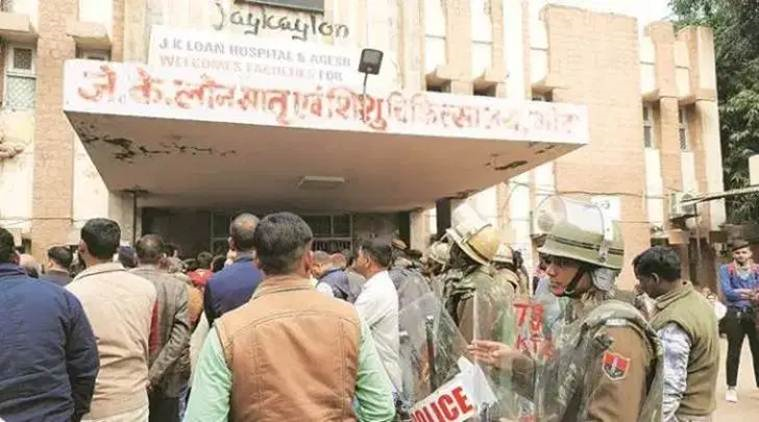 What is urgently required is not the involvement of private players but a sincere engagement by the state in matters concerning peoples’ health. Reports have shown that most of the babies in Kota died due to suffocation at birth; low birth-weight and infections were the other significant causes of death.

Nearly 200 children have died in the past two months at the J K Lon Government Hospital in Kota, Rajasthan. This comes barely six months after the death of more than 150 children in an alleged encephalitis epidemic in Muzaffarpur, Bihar. In 2017, more than 1,000 children died in the state-run Baba Raghav Das (BRD) Medical College in Gorakhpur, Uttar Pradesh.

In Slaughterhouse-Five, Kurt Vonnegut uses a phrase a number of times — “so it goes”. The phrase conveys death. Vonnegut’s use of the phrase in a novel on war conveys the message that life just went on even though men, women and children were dying — no one cared for the losses. With our conscience not pricking us despite the regular deaths of so many children across the country, the phrase should haunt us.

According to the UNICEF’s report, ‘State of World’s Children 2019’, India reported the maximum number of deaths of children under five in the world in 2018. Eight lakh eighty two thousand children under five died that year. That means around 2,416 deaths per day — or seven jumbo jets full of children crashing every day without anyone taking notice.

The death of children due to largely-preventable illnesses is a matter of serious concern and calls for urgent introspection. Unfortunately, we have failed to learn from past experiences. In fact, after the Kota tragedy, the narrative has degenerated into a blame game with the leaders of the BJP and the Congress engaged in mud-slinging over which is the greater tragedy — the deaths in Gorakhpur or those in Kota. Nothing could be more shameful. To indulge in a game of one-upmanship over the deaths of children is like medieval rulers boasting their hunting trophies. Actually, it is not about the BJP or the Congress. The death of young children should draw our attention to something more important and pressing.

The matter is also not merely about the non-availability of healthcare services or deficits in other realms of preventive medicine. The deaths in Kota, Muzaffarpur and Gorakhpur should draw our attention to a conglomeration of factors that govern child health in India. Most of the children who died in Gorakhpur, Muzaffarpur and Kota belong to the lowest strata of the society. It won’t, therefore, be wrong to conclude that they were victims of structural violence. In India, this structural violence is unleashed through a multitude of social, political and economic factors — apathy of healthcare professionals, poor health services/infrastructure in rural hinterlands, low rates of female literacy, economic inequality, the rigid caste system, social apartheid, lack of political will and patriarchy.

Kota happened because we slept after Muzaffarpur and the tragedy in Bihar happened because we were complacent after Gorakhpur. As a society, we have stopped looking at the deaths of our citizens through the prism of compassion and concern. Such apathy is unfortunately all pervasive — complicit in it are a range of people from political leaders to doctors practising in a rural primary health centre to the village headman.

In his landmark paper, ‘Anthropology of Structural Violence’, Paul Farmer of the Department of Social Medicine of the Harvard Medical School uses his experiences among the poor of Haiti to describe structural violence. The idea that some lives matter less is the root of all that is wrong with the world, Farmer contends. Structural violence, he points out, influences the nature and distribution of extreme suffering. The hypothesis holds true in the Indian context.

So what is the solution? Even before the smoke from the pyres in Kota has settled, a Niti Aayog document shows that the government is considering the takeover of 750 district hospitals by private medical colleges through a public private partnership (PPP) model. This, despite ample evidence about the failure of the model in the country’s healthcare system. In his seminal paper, ‘Uncertainty and Welfare Economics of Medical Care’, Nobel laureate Kenneth Arrow demonstrated that profit and private involvement in healthcare leads to an erosion of trust. Arrow pointed out that because an individual’s demand for medical services is irregular and unpredictable, the involvement of a private market model for such services (in any form) can be disastrous. This understanding from 1963 holds true even today. Medical factors are much more unpredictable in India today than in Arrow’s America. The country’s experiences in the PPP model in healthcare have shone a light on the deficits in transparency and highlighted the lack of care of vulnerable groups. They have raised ethical questions about a market-driven healthcare model.

What is urgently required is not the involvement of private players but a sincere engagement by the state in matters concerning peoples’ health. Reports have shown that most of the babies in Kota died due to suffocation at birth; low birth-weight and infections were the other significant causes of death. These are highly-preventable reasons. The role of the state in delivering health to its people cannot be overemphasised. We need to question the government’s priorities in a country where nearly a million children die every year.

This article first appeared in the print edition of January 8, 2020, under the title “Children of lesser gods”. The writer is professor of Orthopaedics, AIIMS, New Delhi. Views are personal.

Threat to Indian Constitution is more serious from the Executive arm of Government having scant resp...
India’s invisible population #mustread
Five-judge Constitution Bench to take a call on #Sec377 #LGBTQ
Marital Rape Debate: Justice DY Chandrachud on Right to say “no” after Marriage