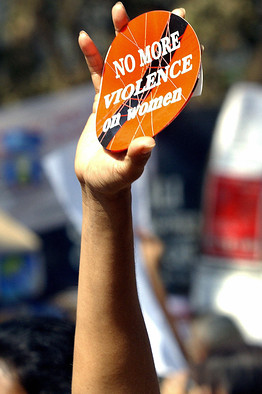 Emmanuel Dunand/Agence France-Presse/Getty Images
It’s all very well to loudly protest and then retreat behind the high walls of your urban fortress, says Rupa Subramanya.

This past week there was yet another account of a young woman being horrifically raped, brazenly and in public view on a bus plying the streets of Delhi.

Delhi’s crime problem, particularly crimes against women, should be kept in perspective. As reported here on India Real Time, Delhi has a large number of crimes in absolute terms, but that reflects its large population. In per capita terms, Delhi is nowhere near being India’s crime capital, nor the most dangerous place in India for women, although it’s worse in per capita terms than the other major metros such as Mumbai or Bangalore. In 2011 for example, there were 2.8 rapes per 100,000 residents in Delhi compared with 1.1 in Bangalore. As it happens, the “rape capital” of India is Durg-Bhilainagar in the state of Chhattisgarh with 5.7 rapes per 100,000 followed by Bhopal, the capital of Madhya Pradesh.

What’s more worrying is the increase in the number of crimes such as rape, according to data registered with the police. In 1973, for example, fewer than 3,000 cases of rape were registered with the police and by 2010 that statistic had jumped to over 20,000. This explosive increase in the number of cases reported does need to be interpreted with caution. As I and my co-author explore in some detail in our book Indianomix: Making Sense of Modern India, at least some of this increased incidence of crime may reflect both better reporting and a more accurate classification of the type of crime involved.

In a socially conservative place like India, rape was — and in many cases still is — considered taboo. So it’s not surprising that few cases were registered in the past. An increase in reporting in recent years may paradoxically reflect the good news that women and their families are now more comfortable in coming forward in reporting these crimes rather than suffering them in silence.

As a second matter, it’s probable that in the past many instances of rape were mis-classified as more generic crimes of violence, so part of the increase in the reported incidents may also reflect the fact that sexual assault against women is being correctly reported as rape and not as generic violence.

One explanation for the brazenness of sexual assaults such as this most recent one in Delhi is the fact that conviction rates remain abysmally low.

If a would-be attacker knows that his chances of being arrested and going to jail are slim, he’s less likely to be deterred than if he knew that his chances of going to jail were high and punishment would be severe. Here too, the government’s official statistics don’t tell a happy story. Back in 1973, about 44% of alleged perpetrators of rape were convicted. By 2010, that percentage had dropped to just over 26%. Again, to the extent that this statistic is driven by the denominator — that is, an increase in the number of cases reported — the news may not be as bleak as it looks.

Still, whichever way you interpret the numbers, public safety and law and order remain major problems in India, which are basic public goods that every citizen is entitled to.

It’s second best because these goods are costly and divert resources from other things people could spend their money on, to say nothing of being inefficient by failing to reap economies of scale.

Likewise, high-end housing colonies and even high-rise apartment buildings increasingly not only have private security which is standard, but also provide walking tracks, tennis courts, swimming pools, etc… The idea is to make these completely self-contained enclaves so presumably residents don’t have to rely on the poor or non-existent provision of public goods such as parks that are clean and safe. And clearly people who can afford to live in such high-end developments aren’t riding public buses.

It’s doubly ironic that senior politicians and bureaucrats, several of whom have been prominently protesting this most recent crime in Delhi, themselves have an escape route from the government’s failure to do its job. They don’t need to rely on the poor infrastructure that they provide to everyone else. It’s noteworthy that in major Western cities such as New York or London, you’ll frequently see politicians, investment bankers and other privileged and wealthy people use public transport and sit cheek by jowl with students, blue collar workers and office goers.

When you yourself ride the buses or subways, you have a personal stake in making sure that people who use them are safe. That’s a lesson that Indian politicians have yet to draw.

And if you had any doubt that senior politicians don’t have their feet on the ground, to take things to new heights, one news story reported on plans to build a helipad atop the President’s official residence so that he and other visiting dignitaries could take a 10-minute hop by air to Palam, Delhi’s old airport close to the centre of town which is now reserved for official use, rather than be bogged down in traffic.

Perhaps perversely, economic policy debates in India tend to centre on sophisticated matters such as whether redistribution programs should be replaced by cash transfers or whether multi-brand retail should be opened to foreign direct investment. Serious economists as well as politicians make plausible arguments on both sides of these and many other debates. But where there is a consensus across the board, from the most ardent libertarian on one end of the spectrum to the most diehard leftist on the other, is the necessity for the government to adequately provide basic public goods and services, not just infrastructure such as water and power but a law and order system that delivers justice.

It’s all very well to loudly protest — whether you’re a politician, news personality, or a middle-class social activist — over what just happened in Delhi and then retreat behind the high walls of your urban fortress. Real reform that will keep India’s women safe will require people to take ownership over these vital public goods and not just comment on them from a distance.

Rupa Subramanya writes Economics Journal and is co-author of “Indianomix: Making Sense of Modern India,” published by Random House India. You can follow her on Twitter @RupaSubramanya.