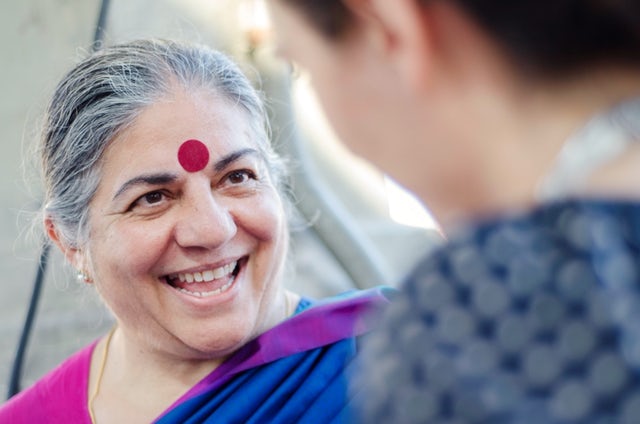 To achieve economic equality, activist and author Vandana Shiva says we need to recognize the value of women’s work and start counting production, not just profits.

LONDON – In the middle of a conference ringing with the latest development lingo, Vandana Shiva cuts a lonely figure. Anti-“empowerment,” anti-“jobs,” and anti-“formal economy,” she rejects many of the narratives that are usually used to promote the cause of women’s advancement. Yet she’s come to the Bond conference on international development in London to press the case for her own vision of how to value women’s work.

For almost three decades, Shiva, 65, has been fiercely critical of big corporations and their effects on women’s lives, from Walmart to the biotech giants who promote genetically modified crops.

To that end, in 1991 Shiva cofounded Navdanya, a women-led movement to promote organic farming and fair trade. Navdanya has so far helped set up 122 community seed banks across India and trained more than 9 million farmers in seed sovereignty and sustainable agriculture. The organization also helped set up the country’s largest fair trade organic network.

News Deeply spoke with Shiva about recognizing the value of women’s work, rethinking how we define the economy, and the human cost of cheap clothing.

Women’s Advancement Deeply: In the past, you’ve taken issue with the term “women’s empowerment,” arguing that women are already empowered but are constantly struggling against factors that disempower them. What do you think is the biggest challenge women face as they try to do that?

We have created an economy that doesn’t count what those women make, because the way we measure GDP says if you consume what you produce, you don’t produce. But if you become a slave in someone’s factory, you suddenly have a job.

The second big challenge is the very narrow definition of the economy that comes from the idea that we are above nature, anthropocentrism. And as that idea destroys both the earth and local economies, the burden falls on women. Every environmental movement that I have been part of in the last 45 years is women-acting. When a river dies, or when water disappears because Coca-Cola was mining it, at a certain point women say, “We can’t walk more than 10 miles to collect water. Now we must say enough is enough.” Then they take on Coca-Cola.

And the burden of destruction is carried by women. When the economy is destroyed through austerity programs, or structural adjustment programs, women end up doing four, five people’s work to keep things afloat.

So, the first challenge is the burden women are carrying and second is the potential they have. Those two need to be taken into account.

Women’s Advancement Deeply: What do you say to people who say globalization is the answer to addressing those challenges, by potentially creating more jobs and more prosperity?

Shiva: First we need to go back to the roots of the word “job.” It was a word created in England when peasants were picked up from their land and brought back to the mines. The saying for that was: they were jobbed. The word “job” didn’t mean work, the word “job” meant cheated.

Take the women in the Bangladesh garment industry for fast fashion. Women who die when a building collapses or a fire breaks out. People say, “But we created jobs.” Do you think those women didn’t make clothes before? They did, but for themselves and for their communities. And they grew food and they were autonomous.

But we have created an economy that doesn’t count what those women make, because the way we measure GDP says if you consume what you produce, you don’t produce. But if you become a slave in someone’s factory, you suddenly have a job.

Women’s Advancement Deeply: Would you say there is too much emphasis on getting women into the formal economy?

Shiva: I think what’s called the formal economy is really a destructive economy. And it’s formal only because those who can control nature and society and exploit both nature and our work have defined it as formal. But if I’m in a village community and I have the strictest rules of how the water will be distributed, am I going to call it informal? No, I call it self-organized.

The idea of formal economy is defined on the terms of the patriarchy … But, in fact, women living under principles of autonomy and dignity are simply living in a different system where the power of men over women is not the organizing principle.

I’ve had this debate right from the days when I fought to keep Walmart from coming into India. They said it was a fight between the unorganized sector and organized retail. But I’d say, “No, no, no, you are totalitarian retail and exploitative retail. We are self-organized retail that is able to provide many livelihoods.”

Just as much as the idea of productivity is a manipulated thing, the idea of formal economy is defined on the terms of the patriarchy. In which case, you’d have to call patriarchy a formal system and women living independently as an unorganized, informal economy. But, in fact, women living under principles of autonomy and dignity are simply living in a different system where the power of men over women is not the organizing principle.

Women’s Advancement Deeply: You’re a vocal critic of genetically engineered seeds, which many people say are the only way many farmers – almost half of them women – can survive through climate crises like droughts and floods. If you take away GMOs, what can these women farmers do instead?

Shiva: What we do with women farmers in Navdanya, which is a women’s movement, is save the seeds of different qualities, qualities such as different nutritional values, climate resilience. Then we create community seed banks, then we distribute the seeds.

This conversation has been edited for length and clarity.

This article is part of “Beyond Empowerment”, a collection of pieces that interrogate the dominant narratives around women’s economic advancement, and propose alternative ways of thinking about gender equality.