The gap between India’s richer and poorer states is widening

Economists are baffled, arguing that the poorer states should be catching up 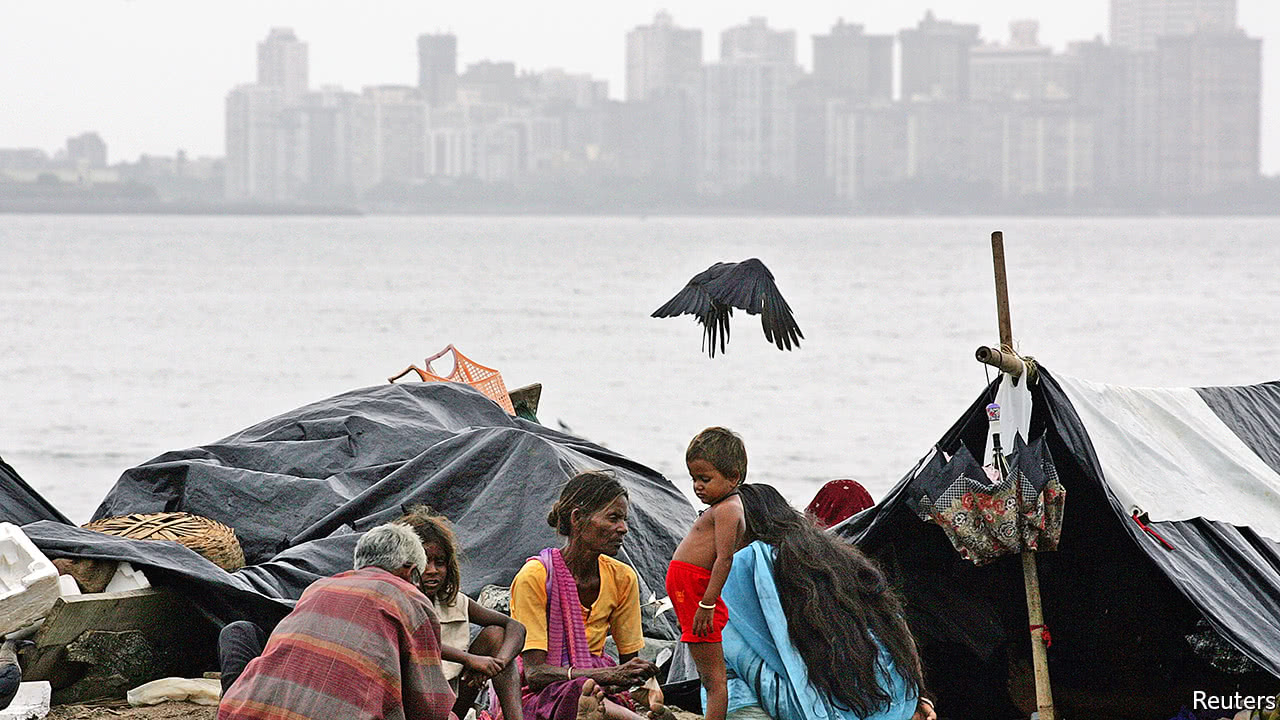 COUNTRIES find it easier to get rich once their neighbours already are. East Asia’s growth pattern has for decades been likened to a skein of geese, from Japan at the vanguard to laggards such as Myanmar at the rear. The same pattern can often be seen within big countries: over the past decade, for example, China’s poorer provinces have grown faster than their wealthier peers. India is different. Far from converging, its states are getting ever more unequal. A recent shake-up in the tax system might even make matters worse.

Bar a few Mumbai penthouses and Bangalore startup offices, all parts of India are relatively poor by global standards. Taken together, its 1.3bn people make up roughly the third and fourth decile of the world’s population, with an income per head (adjusted for purchasing power) of $6,600 dollars. But that average conceals a vast gap. In Kerala, a southern state, the average resident has an annual income per head of $9,300, higher than Ukraine, and not too far from the global median. With just $2,000 or so, his fellow Indian in Bihar, a landlocked state of 120m people, is closer to a citizen of Mali or Chad, in the bottom decile globally.

The gap has been widening. In 1990, point out Praveen Chakravarty and Vivek Dehejia of the IDFC Institute, a think-tank, India’s three richest large states had incomes just 50% higher than the three poorest—roughly the same divergence as in America or the EU today, and more equal than in China. Now the trio is three times richer (see chart).

It is true that in some rich parts of the world, income gaps between regions have in recent decades been widening. But India’s experience still puzzles economists. Poor countries benefit from technology developed in richer ones—from trains to mobile phones. Workers in less rich countries accept lower wages, so firms build new factories there.

The catch-up process ought to be all the faster if barriers to the movement of goods or people are lower. Regions within China have been converging rapidly, partly owing to the market, as factories move production inland, where wages are cheaper, and partly to government attempts to lift poorer regions by investing heavily in their infrastructure. Arvind Subramanian, chief economic adviser to India’s government, earlier this year wrote that its states’ divergence is “a deep puzzle”. The brief bout of liberalisation in 1991 probably played a part, by unevenly distributing the spoils of more rapid overall growth. But that burst of inequality should have self-corrected as the forces of equalisation came into play.

One theory blames this divergence on states’ isolation even in the Indian domestic market, as a result of lousy infrastructure, red tape and cultural barriers. Moving stuff from state to state can be as troublesome as exporting. Internal migration that would generate catch-up growth is stymied by cultural and linguistic barriers: poor northern states are Hindi-speaking, unlike the richer south. Cuisines differ enough for internal migrants to grumble. It is harder to have access to benefits and state subsidies outside your home state.

Mr Subramanian thinks such arguments are overdone. India may not have mass migration on the scale that transformed China, but is still sizeable, he argues, and has been rising as a share of the population even as convergence has gone into reverse. Inter-state trade is healthy, suggesting suitably porous borders.

Another theory looks at India’s development model: growth has relied more on skill-intensive sectors such as IT than on labour-intensive manufacturing. This may have stymied the forces of convergence seen elsewhere, Mr Subramanian posits. Perhaps, however low their labour costs, the poorer places lack the skills base to poach jobs from richer rivals.

A more likely explanation is that the reasons some states lagged in the first place—mainly to do with poor governance—are still largely in place. Bihar’s low wage costs make it look attractive on paper as a place to set up a factory. But many firms seem to conclude they do not compensate for its difficulties.

If that idea is correct, the introduction of a new goods-and-services tax (GST) on July 1st might have worsened the divergent trend. Lots of state-level levies have been replaced with a single tax. Although barriers to interstate trade have become markedly lower, states have also forgone some fiscal autonomy, such as offering tax breaks to lure in investors. That may make it harder for poor states to catch up, says Mr Chakravarty.

Mr Subramanian notes, however, that the forces of convergence are gaining strength. Despite falling behind on income, poorer states have been catching up on human-development measures such as infant mortality and life expectancy. Fertility rates in the northern Hindi belt are fast falling to levels already reached by, for example, Tamil Nadu, a rich southern state. India’s “demographic dividend” is largely an opportunity for its poorer states—if they can create enough jobs to grasp it.

Convergence is obviously desirable in a country where the straggling states are home to some of the world’s poorest people. But it might also help avert a political peril: that rich states start wondering if being lumped with far poorer peers is in their interests. In many states regional political parties compete with the national ones that have mostly dominated the federal government and quashed any talk of separatism. The questions over the divergent fortunes of Indian’s states are puzzling. They may yet become more serious.

ACHR urge GoI to pledge for abolition of death penalty
“ANYTHING BUT THE TRUTH”-Response to story #SoniSori in Indian Express- WSS
A Day in the Life of #Demonetized Gujarat
Out of shadow, PPPs at last come under RTI ambit