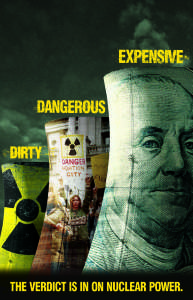 Some people believe that civilian nuclear energy programs are going great guns and will grow more in future.
Nothing can be further from the truth. They will not.
In fact, its slow death is already on and can only accelerate in future.
Let us understand why.
The nuclear energy industry has had a charmed existence for over half a century. The western world is attempting to disown their nuclear weapons and reactors but finding it horribly expensive and complicated to do it. Yet, India wants to fall into the trap that the nuclear transnationals such as GE, Westinghouse, Toshiba, Hitachi, Areva etc are laying out. This is a near and long term disaster as this technology is not only inherently dangerous but a upcoming disaster for India.
THE BACKGROUND:
What essentially started as military research for the development of Weapons of Mass Destruction (WMD) was subtly packaged as a benign and clean source of energy. At heart however, the roots of nuclear energy are firmly linked to its military and destructive use.
The cold war was an occasion which offered the nuclear industry access to massive funds, research facilities, government grants (subsidies) and huge freedom to conduct more and more research into making more and more deadly weapons.
Civil Nuclear Energy was simply a byproduct of this military work.
Companies and governments worked overtime to create a veil of secrecy around atomic energy so that the common person would not be able to link the two. To their credit, they succeeded for a large part. In the days before the advent of the internet, information was scarce and was expensive to procure. People, by and large, tended to believe whatever the ‘scientists’ and the governments told them.
Essentially, they were sold two stories –
1) Nuclear industry equals ‘national security’ and ‘national pride.’ Any opposition to nuclear automatically makes you an anti-national.
2) Nuclear Energy has no alternative because of its “cleanliness” and ability to deliver large amounts of power at cheap cost.
It is said that if a lie is told a thousand times, people start to believe that it is the truth.
Yet, it is also a truth that ‘You can fool some people all the time, you can fool all the people sometimes but you cannot fool all the people all the time.’
The tipping point for the nuclear industry came after the end of the cold war. Contrary to what most people believe, Chernobyl had no major effect on the growth of the nuclear energy business. After a tiny blip, the industry was back to its own self.
Concealment, fabrications, misrepresentation of facts, propaganda, censorship of news, strong arm tactics were all part of the overall cold war game.
The world knew that a huge nuclear accident had happened in Russia.
But beyond that, they had little more knowledge. The Russians painted a picture of “all-is-well.” On the other hand, the West tried to malign Russian nuclear technology and its safety. Neither really questioned nuclear energy as a whole.
Sure, there were enough independent researchers who risked their lives and limbs to bring out the truth. But it was easy for the governments in those days to tackle these civilian groups. After all, government agencies were trained to play the big spy games – for these masters this bunch of civilians was a piece of cake.
The disguise continued unabated until the unexpected end of the cold war. The end of the cold war meant that there was little need for military deterrence (?) Clearly, future wars would be fought on economic fronts and smart wars would take center stage.
Tactical weapons, quick surgical strikes on specific small strategic targets which do not require the kind of arsenal needed during the cold war days became the name of the big game. It is no longer fashionable to parade the missiles and war heads on National days and gloat about technological prowess.
These new weapons do not require plutonium but need a material that is far easier to procure – depleted uranium (DU). 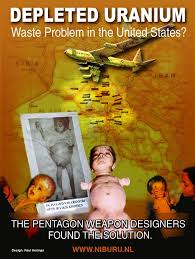 expensive re processing technologies. The guided missiles tipped with DU are hundreds of times more powerful compared to ordinary bombs and can cause massive damage to over and underground structures. Because of the fact that they do not leave a huge visible impact (like that of an Atomic Bomb at Hiroshima or Nagasaki) people do not realize that effectively a nuclear weapon has been used.

These shells and missiles have been extensively used in the wars in Iraq Serbia Afghanistan and elsewhere by the NATO forces. Sometimes they may have ensured that the targets are taken out; but mostly not. They are as deadly as a nuclear attack and leave behind vast amounts of radiation in the environment. People affected by DU develop the same conditions as those in Hiroshima or Nagasaki – the only difference being that of immediate visibility and localization.
The US and NATO troops have got away by using these weapons of tactical attack for many years now and the effects are showing up in the local population there – increased cancer, deformities, mutations and all the other radiation induced diseases are seen here. The soil and ground water is polluted with uranium and will continue to do so for many decades to come. The radiation has spread wider and entered the food chain and will continue to irradiate for a long time to come.
The West had found the ideal nuclear weapon which can be used easily – without any concern of accountability or justification needed for a full blown nuclear attack.
The need to use nuclear energy and the spent fuel has diminished and the military had a far lesser interest in these reactors.
Almost at the same time, another and more significant revolution was taking place.
The information revolution.
Almost out of nowhere, the computers, satellite television, instant messengers and the internet were all over the world.
Nothing was hidden. Information previously restricted to libraries or locked away in forgotten cupboards was suddenly openly available.
Information flow meant that there were no longer any holy cows. Discussions happened over emails and internet, ideas exchanged and previous paradigms challenged.
When Data gets analyzed, it turns into Information.
Massive amount of data which was scattered all over the globe earlier was put together and analyzed. Cheaper yet more powerful computers allowed this massive data to be analyzed on desktop computers without the need for super computers.
And what emerged was the naked truth.
Atomic and nuclear science is no more (or less) mysterious or complex than any other science. The sheer eliteness of being part of a select “nuclear club” was shown to be hollow. The cost of nuclear energy in purely financial terms was proven to be thehighest, the enormous social damage, the horrible medical conditions and the silent environmental destruction were proven – with irrefutable data.
Troubles as they say come in multiples.
But more was to follow.
With no place to hide, the nuclear industry was hit by developments in renewable energies which took off at a massive scale which resulted in prices crashing beyond imagination. A new, safe and cost effective option had arisen for which the nuclear industry was totally unprepared – it was literally caught with its pants down!
With no business model to survive, shrinking patronage from the Defence and Government ministries; Fukushima was the final nail in the coffin for the nuclear industry. In plain, open view, the incident shamed the industry badly and showed the world that the civilian nuclear operators were leagues ahead of Big Oil and Tobacco when it came to blatant lies and endangering lives for maximizing their own profits. Safety and ethics be damned.
Decommissioning costs and Mixed Oxide Fuel myth:
As the US reactors started to age and reached about 60 years of their commissioning  a deadly truth hurt the companies operating them. They have to decommission these reactors and dispose the nuclear waste (euphemistically called as spent fuel). There was talk of using mixed uranium + plutonium oxide (MOX) fuels for future generation reactors, but that has gone horribly wrong in all countries beyond any realistic or economic horizons and are being abandoned despite the huge government subsidies which they received for decades (read reports here here and here).
Yet, India continues to harbor hopes on this failed and expensive plan which at best can be termed as a laboratory experiment – hence called as the Prototype Fast Breeder Reactor (PFBR) that has already cost the country crores of Rupees and is way beyond its projected commissioning year of 2009.
Also, the cost of decommissioning a nuclear reactor is tentatively Rs. 200 crores at the recently troubled San Onofre Nuclear Generating station in California USA which was shut since the past 18 months following radioactive leakages after being “revamped” and “redesigned” . Plus, it can take anywhere from 20 to 50 years for this and to bring the land back to its original state and safe for residence (if ever). Read more.
Now, can anyone – even in their wildest dreams – explain the logic behind this disastrous folly except for the nuclear hawks and greedy politicians and businessmen? Can any Indian agree with his hand on his heart that after spending thousands of crores in building these reactors, India has the will or ability or spending power to see through the costs of decommissioning  storage and security?
The folly of going nuclear as part of its energy basket is so laughable that it will get thrown out simply for economic reason if not for it’s dangerous repercussions.
In the end, the nuclear industry has to blame itself for its death. Nobody – except probably its own nuclear village fraternity – will shed any tears on its death.
This is one death which does not really merit a RIP; it is a well-deserved slow death. 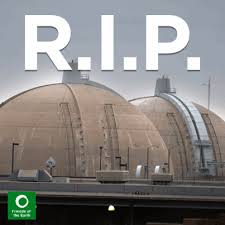