The Japanese monk who is against the BJP 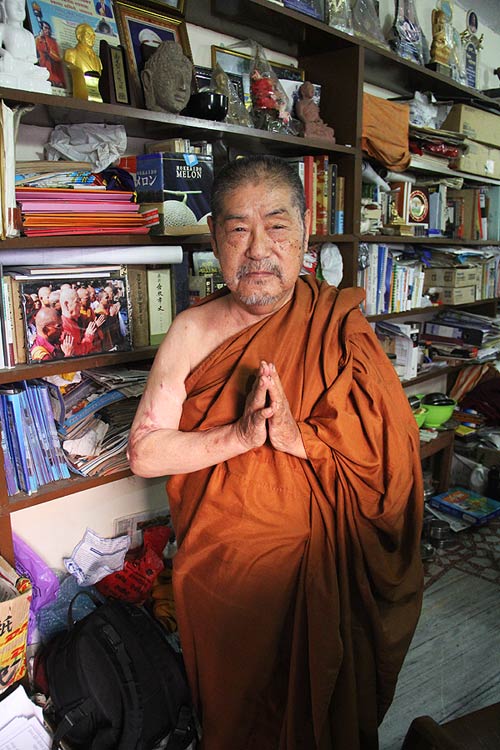 ‘If they come to power, they will try to change the Constitution. They are destroying Babasaheb’s name. They are fundamentalist people,’ says Surai Sasai, the Buddhist monk who has issued an edict that Nagpur’s Buddhists not vote for the BJP or its candidate Nitin Gadkari.

The Buddhist areas in Nagpur, Rediff.com‘s Vaihayasi Pande Daniel discovers, have a special identity and a firm thinking of its own. Additional reportage and Photographs: Uttam Ghosh/Rediff.com

The Buddhists of Indora, north Nagpur, do not want Narendra Modi.

Nor will they vote for any candidate put up by the Bharatiya Janata Party, or with links to the Rashtriya Swayamsevak Sangh.

Indora is a significantly Buddhist area — according to the locals it is about 60 percent Buddhist. This unusual-looking neighbourhood, along with a few others (Kamptee, Sitabuldi), contribute to the city’s 25 percent and Maharashtra’s 5.83 million Buddhist population (as per the 2001 Census figures).

Indora has a flavour somewhat different from the rest of Nagpur or urban Maharashtra.Viharas (some 25 monasteries), stupa-style buildings with pale blue domes, toranas (gateways), dharmachakras, and bare-chested monks, swathed in orange or maroon robes, roaming about, instantly give you a sense of the area’s strong Buddhist leanings.

As does the predominance of the colour blue.

Nagpur was where Dr Babasaheb Ambedkar, shunning Hinduism’s caste injustices, tookdeeksha to become a Buddhist in a public ceremony, along with his wife Savita (nee Dr Sharada Kabir), and 500,000 followers in October 1956.

The deekshabhoomi, where Dr Ambedkar became a Buddhist, is sacred to the community and thousands more conversions followed, bringing an unexpected 20th century surge in Buddhism in India.

Since the 1950s, Nagpur has attracted a population of neo-Buddhist Dalits. Many made Indora their home. This vast area — Chota Indora and Naya Indora — evolved from a miserable, garbage-ridden slum, where no one wanted to go/live, to the more prosperous, well-laid out neighbourhood it is today with sturdy houses, wide streets, viharas, businesses and even malls, where upwards of 300,000 people live.