The Ku Klux Klan has grown faster since Donald Trump’sinauguration than any time in recent memory, a Klan leader has claimed.

“I’ve been doing this for over 20 years and I haven’t seen the Klan grow at the pace it’s growing now,” Chris Barker, an Imperial Wizard of the KKK, told The Independent. “I mean, it’s even hard to keep track of the numbers you’ve got ’cause there’s so many coming in.”

Mr Barker said that after the white supremacist rally in Charlottesville he received 50 applications to join his group in one day. The next day, he received 80.

Mr Barker leads the Loyal White Knights of the KKK, which has less than 200 members. As one of the most active Klan groups in the US, the group takes part in “activism” such as burning crosses, advocating for the murder of immigrants, and distributing leaflets claiming, among other things, “transgender is an abomination”.

Mr Barker contacted The Independent about a previous article, from which he had gained notoriety for calling a Univision journalist a “n*****” and threatening to burn her out of the country. The Klan leader claimed he had meant this as a threat to immigrants in general, not the journalist in particular.

He also said he had been tricked into letting the Afro-Latina journalist onto his property in the first place.

“That was one of the things we told [Univision producer Maria Martinez-Guzman], ‘We do not want no blacks on our property’,” he said. “And pretty much, Ms Guzman to me broke everything she said by pretty much allowing that lady on there.”

“When Obama became President, that’s when [membership] just skyrocketed,” he said. “And now that Trump is President, it seems like it’s getting even better, because more whites are starting to be more proud.”

His comments should be taken with a pinch of salt – Mr Barker also claimed that the brains of black people are less developed compared to white people, and that the Bible warns against breaking bread with immigrants.

Plus, according to Carla Hill, a researcher with the Anti-Defamation League, extremist group leaders are prone to overstating their numbers. 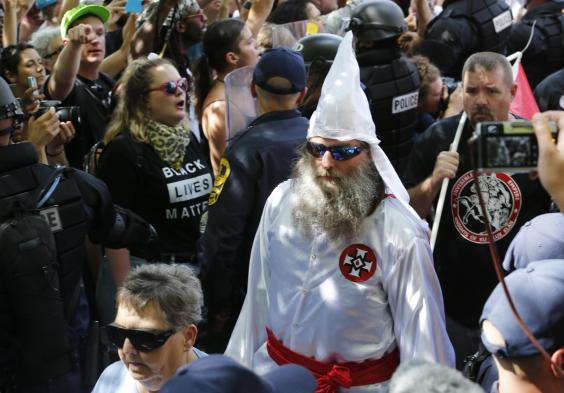 “Barker’s group has actually lost membership in the last year largely due to his reputation,” Ms Hill told The Independent.

She added: “We will have to wait and see the effect of Charlottesville on the white supremacist movement. Many extremists view it as a huge success; others may be turned off by the backlash directed toward those who have been identified as attendees.”

Indeed, the KKK’s numbers and prominence have seen a marked decline since its height in the 1920s, when an estimated four million people donned the white sheets.

But according to the ADL, which has been tracking Klan groups since at least 2000, there has been a slight uptick in activity in the past year. Approximately 30 KKK groups were active over the course of 2016 – a decrease from the year before. That number has since risen to 40.

This summer also marked a departure from the trend of small, scattered, and sparsely attended KKK demonstrations. Several different Klan groups turned out for the rally in Charlottesville, Virginia, where white supremacists from around the country protested the removal of a Confederate statue. The rally, which Mr Barker’s group also participated in, was said to be the largest white supremacist gathering in the US in decades.

Under pressure from the media, Congress, and public, Donald Trump denounced the KKK and other white supremacists groups who attended the rally. But he later walked back these comments, blaming “both sides” for the violence that ensued and claiming many “fine people” had attended the white supremacist march.

In the wake of the rally, Mr Barker said, the Loyal White Knights were flooded with “message after message” expressing interest in joining. Their website, he claims, temporarily crashed because of the increase in traffic. (This may or may not be the case – many white supremacist websites were deactivated by their hosts amid backlash against the rally.)

“A lot of white people were proud to see their people standing up for their own kind,” he said of the event, in which one person was killed and dozens were injured. “To me this gave whites more hope.”

The comments were similar to those expressed on white supremacist website The Daily Stormer. In the days following the rally, posts promised to “Start doing this nonstop” and to “Go bigger than Charlottesville”.

Mr Barker said the triumphant feeling came from a sense of victory over those who have deemed it “racist” to express pride in being white.

“This right here has made it where [white people] feel like, ‘Yes we can say it, and yes we will say it’,” he said. “And if somebody wants to say something back, we will strike back.”

He added: “You can’t push a dog in a corner for so long – he’s gonna lunge out at you.”