The Lost Fishermen of India and Pakistan 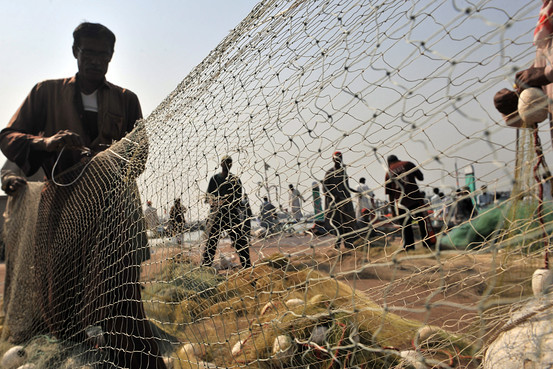 Nawaz Ali Muhammad, a fisherman from the small village of Shah Bunder in southern Pakistan, went missing during a cyclone over the Arabian Sea in 1999.

His wife believed he was killed in the storm. But six years later, she heard he was alive, in an Indian prison. A fellow Pakistani fisherman had been released from the prison, and upon returning to Pakistan said he had met Mr. Muhammad.

It took another year for the Indian government to acknowledge that Mr. Muhammad was in custody, charged with spying for Pakistan and smuggling narcotics. An Indian court had sentenced Mr. Muhammad and three other fishermen – his uncle and two cousins – to life in prison in 1999.

In October, more than 13 years after going missing, Mr. Muhammad returned to Pakistan in a coffin. He was 39 years old when he died in hospital after an illness. Authorities weren’t able to disclose how he died but said there was no sign of foul play.

“He should be here, with me, alive,” said his wife Hamida, who uses only one name. She lives a one-room thatched house in Rehri Goth an impoverished fishing community on the outskirts of Karachi. Mr. Muhammad’s family and those of the other three fishermen moved there from Shah Bunder to look for work. 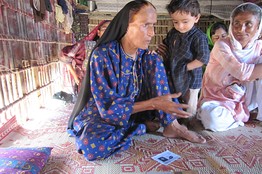 The Indian Ministry of External Affairs referred questions to the High Commission in Pakistan, which didn’t respond to requests for comment.

“Both governments have time and again said that fishermen are not involved in criminal activities,” said Jatin Desai, an Indian journalist and secretary of the Indian chapter of the Pakistan-India Peoples’ Forum for Peace and Democracy, a coalition of civil society groups that works to build ties between the two countries.

“They pleaded to me that they were innocent and had nothing to do with any illegal activities,” he said, adding that an appeal on behalf of the fishermen has been pending before the Indian Supreme Court since 2007. The fishermen couldn’t be reached for comment.

“Sometimes because of wind or storms, our boats end up in Indian waters,” said Nawaz Ali Dabloo, a 25-year-old fisherman from Rehri Got. His younger brother went missing in the 1999 cyclone and is presumed dead. His grandfather was imprisoned in India for three years in 1971 after straying into Indian waters.

India and Pakistan, who have fought three wars since independence from Britain in 1947, disagree on where the national border lies in Sir Creek, a waterway that opens into the Arabian Sea. Pakistan says the border is on the eastern coast, but India says it is in the middle. Skirmishes over Sir Creek contributed to the outbreak of the 1965 Pakistan-India war, and in 1999 India shot down a Pakistani surveillance plane that allegedly crossed the international border nearby.

Talks on the boundary were scheduled for December 2008, but they were put on hold after the Nov. 26 Mumbai attacks, when Pakistani gunmen killed 166 people. According to Indian authorities, the Pakistani militants hijacked an Indian fishing boat in Sir Creek and used it to reach Mumbai.

Mr. Dabloo said fishermen have found it harder to earn a living in recent decades due to a changing climate and overfishing. They often go out to sea for weeks at a time, and sometimes end up in the disputed waters of Sir Creek as they come and go.

“There is no signpost to mark the boundary, and you can’t always see the shore,” Mr. Dabloo said.

As signatories to the United Nations Convention on the Law of the Sea, Pakistan and India were required to resolve disputes on waters by May 13, 2009, but with the freeze on talks, the Sir Creek boundary was not set. According to the treaty, if signatories miss the deadline to resolve disputes, they lose the right to the waters, which fall under international control.

“You can’t draw lines in water, nor put up walls so the fishermen would know that this is the Indian or Pakistani border,” said Muhammad Ali Shah, the head of the Pakistan Fisherfolk Forum, a non-governmental organization that is part of a South Asian coalition advocating on behalf fishermen.

“Sometimes fishermen fall asleep in their own country’s waters,” he said. “The current takes them to the other country’s waters and they are awoken by Indian or Pakistani maritime forces and arrested.”

“Their crime is that they are poor people,” added Nasim Aslam Zahid, a retired Pakistani Supreme Court judge who heads the Indo-Pak Judicial Committee on Prisoners.

The Indo-Pak Judicial Committee was formed by civil society groups and is composed of eight retired judges; four from each country. Every six months, they visit jails in India and Pakistan and compile lists of prisoners, which are shared with the two governments.

In order to be repatriated, fishermen have to prove their identities. Mr. Zahid said this is a difficult task as the fishermen are extremely poor, illiterate, and rarely have a passport or ID.

“Neither the Pakistani government nor the Indian government is the least bit concerned about this lengthy process,” Mr. Zahid said, explaining that several different ministries need to be contacted in both countries so that a police official can be dispatched to question relatives of detained fishermen about their identity.

When fishermen have served their jail time for crossing the border illegally and their identities are confirmed, they must wait for the two governments to allow a release of prisoners.

A release of fishermen, usually referred to as a “confidence building measure” or “humanitarian gesture,” is reciprocated by the release of fishermen by the other country. In 1997, 193 Indian fishermen were exchanged for 194 Pakistani fishermen. In 2001, three months before then-president Pervez Musharraf visited New Delhi for a summit, 157 Indians were released for 160 Pakistanis.

Hundreds of fishermen were also released in 2005 and 2006 in the lead up to bilateral talks. Sometimes, a country will release fishermen unilaterally.

Mr. Desai said there should be a no arrest policy in Sir Creek as fishermen will continue to need to fish in the waters. “Instead of arresting fishermen, they can be sent back to their waters,” he said.

“The issue needs to be seen from the humanitarian angle,” he added. “They are poor and most of them are either illiterate or semi-literate. For centuries they have depended on [the] sea and that is their only source of survival.”

Umar Farooq is an independent journalist based in Pakistan.  He blogs at umar-farooq.com