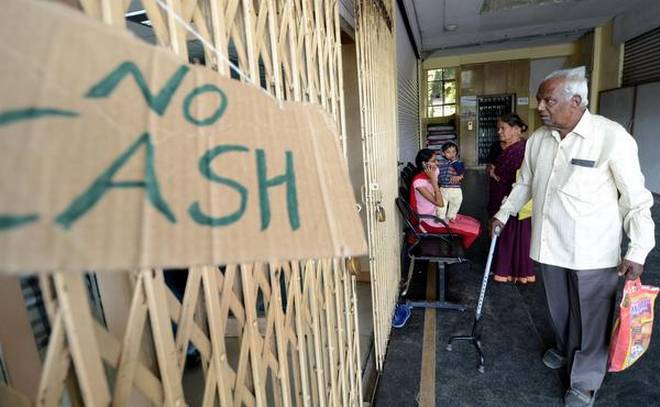 New Delhi: “If demonetisation imperilled Indian economy in the short term, GST did it for the medium to long term, but with the implementation of the proposed FRDI Bill, the path to recovery will be impossible,” Gautam Mody, General Secretary of NTUI said in a meeting organised by All India Bank Officer’s Confederation (AIBOC), National Alliance of People’s Movements (NAPM), and New Trade Union Initiative (NTUI) titled ‘Last battle to save the Public Sector Banks’ at the Constitution Club of India, today (November 29). Mody said that the multi-pronged solution of the NPAs – Recapitalisation, Insolvency and Bankruptcy Code (IBC) and Financial Resolution and Deposit Insurance Bill – do not have a sustainable solution for the recovery of bad loans.
A Critique of Financial Resolution and Deposit Insurance (FRDI) Bill, 2017 titled ‘Wrong Diagnosis, Harmful Prescription’ jointly published by AIBOC, NAPM, NTUI and Centre for Financial Accountability (CFA) was released at the meeting.
Speaking at the occasion legal scholar, Dr Usha Ramanathan said that the major economic decisions are taken without any consultation or public debate. Referring to the mandatory and forced use of UID for all financial transactions she said,  “extraordinary ambitions of the technology makers are putting the monetary system of this country under brutal attack.”
Thomas Franco, General Secretary of AIBOC, said that the bill would have an adverse impact on the common people, who deposit money at the Bank to earn interest. Moreover, the bill provides for a cap on the withdrawal as a measure for the banks to increase the spending and bridge the losses caused by faulty lending.
Drawing attention to the recovery rate of the National Company Law Tribunal, he mentioned that in the first case of insolvency, the recovery rate was just six percent. He asked for the need the to fix the accountability of the Bank’s management, RBI representatives, and Finance Ministry representatives in the case of defaults.
Economist Meera Nangia drew the attention of the audience on the steep haircuts, which causes loss to the public and the capability of all 22 Asset Reconciliation Companies, which have a capital of Rs 100 crore each as capital. She asked, “How will they deal with the total NPA, which by government’s conservative estimates if of over 8 lakh crore?”
The Public sector as a whole and specifically the banking sector is on the brink of an overhaul, Madhuresh Kumar, National Convenor of NAPM said. He added that the privatisation of banks has been one of the coveted goals of liberalisation policies, but has been resisted by the bank employees and progressive people in general. Despite this, there has been a concerted effort to privatise public sector bank over the decades. This time, the government is using the NPA crisis to further the agenda of privatisation.
The proposed Bill seeks to destroy the value of the industries, which are assets of the society and not only of the promoters. Mody said. The Asset Resolution Companies will take away the value of these assets by breaking up the company and selling it in parts. The Bill doesn’t seek to punish the promoters, who followed the wrong policies.
Background:
Attempts to privatise the public sector banks have been ongoing since the economic reforms. The current crisis with the rising NPAs in the banking sector is being used as another opportunity to overhaul the banking system. With years of propaganda of an inefficient public sector, a climate of disinvestment is only perfect to liquidate any public sector financial institution! Hence what we are facing today is not just an NPA crisis is a conscious effort to reverse the nationalisation of banks and to end public sector.
The combination of merging small banks to create a few ‘lending giants’ along with the introduction of payment banks is a perfect way to end brick and mortar branches. The proposals of ‘haircuts’ (a fancy term for write-offs,) the policy of demonetisation, evergreening of loans, selling bad loans at a pittance to asset reconstruction companies are all measures that would further weaken the public sector banks.  A slew of legislation on banking sector, in the form of, the Insolvency and Bankruptcy Code (IBC), 2016, the Banking Regulation (Amendment) Ordinance, 2017 and the Financial Resolution and Deposit Insurance (FRDI) Bill, 2017 were introduced in haste and without a debate in order to make the PSBs weak and subservient. Particularly the FRDI puts most of the PSBs under the threat of being liquidated.
Banks apart, the entire public sector is facing disinvestment, privatisation, and selling of assets and resources in the name of cutting losses. It is vital for all progressive sections of the society, cutting across political affiliations to come together in building a rock-solid resistance.
Link of Wrong Diagnosis, Harmful Prescription: A Critique of Financial Resolution and Deposit Insurance (FRDI) Bill, 2017: http://www.cenfa.org/wp-content/uploads/2017/11/FRDI-critique-Draft-Nov-29-2017.pdf