The rapes that India forgot #Vaw 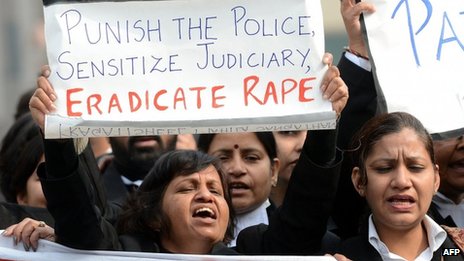 The BBC;s Geeta Pandey in Delhi remembers some of the prominent rape cases which made the headlines when they happened, but have now faded from the public memory.
There have been widespread protests in India since the 16 December gang rape

Last month’s brutal gang rape of a young woman in the Indian capital, Delhi, has caught public attention and caused worldwide outrage. But here, the BBC’s Geeta Pandey in Delhi recalls other prominent cases which made the headlines, then faded from public memory.

On most days, Indian newspapers report shocking new atrocities – a 10-month-old raped by a neighbour in Delhi; an 18-month-old raped and abandoned on the streets in Calcutta; a 14-year-old raped and murdered in a police station in Uttar Pradesh; a husband facilitating his own wife’s gang rape in Howrah; a 65-year-old grandmother raped in Kharagpur.

But in a country where a rape is reported every 21 minutes, even these most horrific of crimes soon get forgotten – except by the victims and their families.

Just drafting a better law will not be enough, it’s the society which has to change”

They are left to fight their long lonely battles for justice which, more often than not, is denied to them.

One of the most painful and lingering cases is that of the Mumbai nurse Aruna Shanbaug. 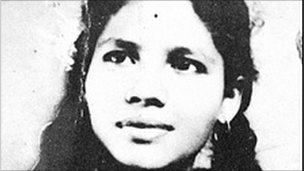 Sodomised by a cleaner in the hospital where she worked, the 25-year-old was strangled with metal chains and left to die by her attacker, Sohanlal Bharta Walmiki, on 27 November 1973.

She was saved and survives, but barely so. For the past 39 years she has been lying in a hospital bed in a vegetative state, brain dead, unable to recognise anyone, unable to speak, unable to perform even the most basic of tasks.

“He was not even charged for raping her,” says journalist and author Pinki Virani, who wrote Aruna’s Story, a book on the nurse’s plight.

So Walmiki was given a light seven-year-sentence for robbery and attempted murder.

In what can be described as a real travesty of justice, while a brain dead Aruna remains confined to a hospital room, her attacker roams free – out of jail and able to rebuild his life.

Ms Virani told the BBC that she tried hard to track him down, but remained unsuccessful.

“I was told that he had changed his name and was working as a ward boy in a Delhi hospital. The hospital where he had sodomised Aruna and left her in this permanent vegetative condition had never kept a photo of him on file. Neither did the court papers,” she said.

Aruna is not alone – her story is repeated with a frightening regularity across the length and breadth of the country.

Violence against women is deeply entrenched in the feudal, patriarchal Indian society, where for the rapist, every woman is fair game.

In 2003, the country was shamed when a 28-year-old Swiss diplomat was forced into her own car by two men in south Delhi’s posh Siri Fort area and raped by one of them. The rapist, whom she described as being fluent in English, spoke to her about Switzerland and is believed to have even lectured her on Indian culture. 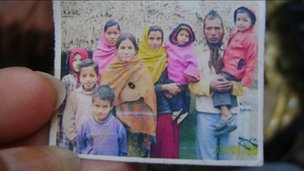 Sonam, 14, (in orange) was raped and murdered in a police station

In 2004 in Manipur, 32-year-old Manorama was taken away from home by the soldiers of Assam Rifles who accused her of helping insurgents. A few hours later, her mutilated body was found by the roadside, her pelvis riddled with dozens of bullets.

Last year, 14-year-old Sonam was raped and killed inside a police station in Uttar Pradesh.

During the 2002 riots in Gujarat, a number of Muslim women were gang-raped, and campaign groups routinely accuse the security forces in Indian-administered Kashmir and the troubled north-east of using rape as a weapon to punish the entire community.

In May 2009, Indian-administered Kashmir witnessed 47 days of violent protests and strikes after two young women were raped and murdered, allegedly by police, in Shopian town.

And in Chhattisgarh, Soni Sori has been in police custody since October 2011 when she was arrested on charges of being a courier for the Maoists. She has alleged in the Supreme Court that while in custody, she has been raped and stones have been shoved inside her vagina.

Most of these victims are still waiting for justice, sometimes years after the crimes have been committed.

The rapists sometimes escape with a light sentence because a judge accepts their argument that they committed the crime because they were drunk, or that they were living away from their family, or they had a family to look after, or that the accused was a high-caste man who could not rape a Dalit – low caste – woman.

The Additional Solicitor General of India, Indira Jaisingh, says the current rape laws in the country are far from adequate and the “process of justice delivery is too slow and the rate of conviction too low”.

“We have to improve the crime investigation methodology, we have to make it more scientific and quick. In India a case takes so long to conclude that witnesses get dissipated, memory frays and conviction becomes tougher.”

She says many cases do not even get to court because there is a stigma attached to rape, and families would often discourage their daughters from complaining. 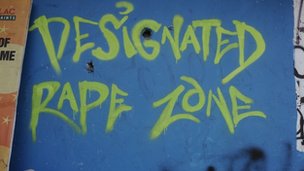 A rape is reported every 21 minutes in India

Ms Jaisingh says that just drafting a better law will not be enough, it is society which has to change.

“There is no magic formula to deal with the problem of rape. There’s a bias that operates in the mind of decision makers – stereotyping women, blaming the victim, trying to find out if she invited the rape.”

But every once in a while, an incident happens which ignites a spark.

The first such incident in India occurred in 1972 when Mathura, a 16-year-old tribal girl, was raped by two policemen inside a police station.

The courts set free the accused – they said she did not raise an alarm, she was not injured, and since she was sexually active, she would have “voluntarily” consented to sex.

Howls of angry protests from activists led to the government amending the anti-rape law in 1983 to accommodate the provision that if a victim says that she did not consent to sex, the court will believe her.

The outpouring of anger and grief after the recent Delhi incident has also given rise to hopes that things are about to change in India.

The government has formed a committee under retired Supreme Court Justice JS Verma to take a fresh look at the anti-rape law.

Justice Verma has invited suggestion from the public and his inbox is reported to be full of demands for the death penalty and chemical castration for rapists. Many are also calling for longer jail sentences of up to 30 years or even life in jail.

But campaigners say laws alone may not be able to solve the problem in a society which treats its women as “second-class citizens” and regards them inferior to men.

They say until social attitudes change and women are respected and treated as equals, the gains from the protests will be shortlived.