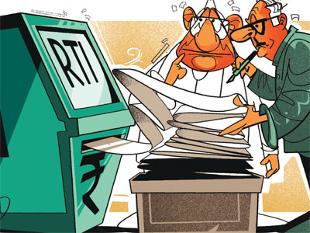 Governments have chipped away at the RTI Act, making their actions less and less accountable and transparent to the people

For 24 years, until the enactment of the Right to Information Act (RTI)in 2005, Shivaji Raut was an ordinary teacher, the vice-principal of Anant English Medium School in Satara district in western Maharashtra. But when he discovered the power of RTI in demanding accountability and transparency from the government, he suddenly shot into the limelight.

I remember how, armed with copies of the muster rolls of 43 villages under the National Rural Employment Guarantee Scheme that Raut had obtained via RTI, we travelled 650 km in one day to check for ourselves the authenticity of the names on the rolls. We picked three villages from Mann and Khatau talukas of Satara, and stood at each village square asking people to gather there. As we read out the names, we realised the huge fraud. Some names did not exist, some were literate but had thumb impressions against the wages paid, and some did not live in the village at all. Suddenly, we found in the RTI Act a tool to expose the government with its own certified copies.

I still remember the ecstasy among scores of activists on October 12, 2005, when the RTI Act was implemented. Thanks to campaigns by activists such as Aruna Roy and Anna Hazare, word had spread far and wide and its use by citizens began. On March 13, 2007, former journalist Vijay Kumbhar took Pune by storm when he became the first citizen to inspect the files under Section 4 of the RTI Act. Until then, a citizen barging into a government office to demand information was unheard of.

The very government that enacted the law was stunned at the way ordinary citizens took to it as a weapon of empowerment, and dismantled the government’s habit of secrecy, beginning with the Official Secrets Act of 1923, a British era relic carried forward enthusiastically.

In 2006, the Manmohan Singh government launched the first missile to dilute the Act. The Cabinet surreptitiously approved a set of proposed amendments to exclude file notings and add more exemptions to Section 8 to include cabinet papers. Activists, however, managed to procure a copy of the proposals and launched a massive ‘Save RTI’ campaign. They sent postcards, signed petitions, and held street protests, demanding that the proposals be dropped as they were contrary to the UPA government’s promise of making the RTI Act more progressive, meaningful and participatory. Sensing the public mood, the government backtracked and did not table the amendments in the monsoon session.

In 2006, civil society could prevail upon the government. Fourteen years later, the government in power did not care. The Right to Information (Amendment) Act, 2019was passed in both houses of Parliament without even a discussion and altering various key aspects of the law.

This has been strategically accompanied by long gaps in appointing Central and State information commissioners. Even a Supreme Court ruling, as recently as 2019, to make the appointment process transparent and fill up vacancies on time and with diverse candidates, is being audaciously ignored. As is diversity. Section 12 (5) of the RTI Act states that the commissioners be selected from among “persons of eminence in public life with wide knowledge and experience in law, science and technology, social service, management, journalism, mass media or administration and governance.” In reality, as the Report Card of Information Commissions 2019-20 by Satark Nagrik Sangathan and Centre for Equity Studies states, 84% of CICs are from bureaucratic backgrounds, including 65% retired IAS officers. To give one example of the political manipulation involved, when the former chief secretary of Maharashtra, Ratnakar Gaikwad, was favoured for the post of State chief information commissioner in 2012, the position was kept vacant for nine months till he retired. There are several examples of politicians sky-dropping their preferred government officials for the post of information commissioner even if they have not applied or been shortlisted by the selection committee.

The second major way in which the RTI is being undermined can be seen in the number of pending appeals and complaints. As on July 31, 2020, in the 23 information commissions countrywide from which data was obtained, 2,33,384 appeals were pending. Not only are vacancies not filled by the State secretariat, qualified staff are withheld. One information commissioner from Maharashtra told me that rejected or incompetent staff from other departments are often sent to him.

How do pending second appeals impact citizens? Reena, 33, is a widow with two little children, and works as a domestic help. She lives in Delhi’s Kusumpur Pahari, a slum with extremely poor physical and social infrastructure. Reena applied for a ration card at the Department of Food Supplies of the Delhi government in September 2018. In January 2019 she filed an RTI application seeking information about her request. Meanwhile, her widow pension was abruptly stopped by the Department of Women and Child Development without explanation. Reena filed a second appeal, this time to the CIC, in June 2019. She is still waiting for the hearing. And now, she is without either a ration card or a widow’s pension.

The third matter of concern is to do with the implementation of Section 4 of the RTI Act, which laid down the suo motu disclosures that public authorities must make in public. Very few departments follow this law, despite a series of circulars by the Department of Personnel and Training (DoPT) since 2003. In 2013 the DoPT finally formed a task force because “the quality and quantity of proactive disclosure is not up to a desired level.” It went on to say that the weak implementation of Section 4 was “partly due to the fact that certain provisions of the Section are not fully detailed and in case of certain other provisions there is a need for laying down detailed guidelines… there is also a need to set up a compliance mechanism.’’

In 2021, the websites of most Central and State public authorities still don’t put up the information required under all 17 subsections of Section 4. Experts have said over and over again that if such information is proactively displayed, the number of RTI applications will fall by over 90%.

Another reason why Section 4 compliance is poor is because of the lack of accountability. The Report Card of Information Commissions 2019-20 notes that “one of the problems with ensuring implementation of Section 4 is that the RTI Act empowers the commission to impose penalties only on PIOs [public information officers], while the responsibility of ensuring compliance with Section 4 is actually with the public authority rather than with a specific PIO.” It goes on to recommend that perhaps “the most effective way of dealing with this problem is to make heads of departments personally responsible for ensuring compliance with provisions of Section 4.” No prizes for guessing that this has not been complied with.

The next hurdle that RTI appellants face is the misuse of Section 8 of the RTI Act by PIOs who reject requests without due consideration. Former CIC Sridhar Acharyulu says, “After 15 years of the RTI Act, we should be looking at the possibility of misuse not by petitioners but by officers. I have seen that most PIOs use exemption clauses without any application of mind. This is because they find it hard to define the exemptions. They don’t have the knowledge, experience or infrastructure to assess what constitutes disclosures and non-disclosures. This, in my view, is a very serious stumbling block in the implementation of the RTI Act.”

The fifth and most chilling factor that dilutes the Act is the killing of RTI activists across the country, with Maharashtra and Gujarat leading the way. Activists are termed blackmailers and as people with ulterior motives. Such disdain comes from public authorities, law enforcing authorities, and sometimes the media too.

So, is there hope? Yes, there is. As long as citizens continue to enthusiastically use the RTI Act and civil society continues to campaign to save the Act, it will survive. The Act needs to be talked about. Since 2005, the government has done hardly anything to create public awareness about the RTI Act, although this is prescribed in the Act itself. It has been left to NGOs to hold workshops, give public lectures, and guide RTI users through clinics, kattas and helplines. The latest, for example, is the RTI Advice App, developed by Moneylife Foundation, that can be downloaded on smartphones.

In a democracy, it’s information that puts power in the hands of citizens — whether while voting a government in or voting one out. So it’s in the citizen’s interest to keep the RTI Act going.

The writer is Consulting Editor for Corporate Citizen magazine and Moneylife where she writes a weekly RTI column.