The science of non-violence #Gandhijayanti 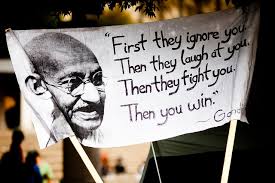 History has shown by numerous examples that in the constant duel between the forces of violence and non-violence, it is the peaceful method that triumphs

Most of us long for a world in which there are no bombings, riots, wars — why then does non-violence seem so difficult to put into action?

The challenge of putting non-violence into action is twofold. During his trial, Nathuram Godse, Gandhi’s assassin, made an elaborate, almost eloquent, argument justifying the use of violence and explaining its necessity. The first aspect is to counter those, like Godse, who see violence as a necessity, as a means to be deployed to get what they want, or as a tool of either acquiring power or holding on to power.

The second aspect is more complicated. How do we answer the cynicism of those who are not votaries of violence and may actually want to reduce the use of violent methods, but have no faith in non-violence as a philosophy, as a method, as a way of life?

Many people who admire or even revere Mahatma Gandhi don’t believe that his advocacy of non-violence is practical. It is the same mindset which may dismiss observing October 2 — the birth anniversary of Mahatma Gandhi — as the United Nations Day of non-violence, and call it an empty gesture in an age when senseless violence and random acts of cruelty seem to be proliferating everywhere. Certainly, those who see life from this vantage point have evidence to marshal in their favour. If non-violence is a force more powerful, they argue, why did Gandhi and Martin Luther King fall to assassins’ bullets? What good has the ideal of non-violence done for the victims of innumerable terrorist strikes or of the wars launched to fight terrorists?

There is no simple answer. And yet, when the obvious futility of violence is expressed from the heart of suffering, its power is indomitable.

In October 2001, as I was walked through a neighbourhood in Manhattan in New York, I was struck by a laminated page stuck on the gate to a small local park. It was the text of a letter written by a woman who had lost her husband in the terrorist strike on the World Trade Center a month earlier. Please, let there be no more killing, she pleaded. Even in that moment of deep personal loss, the widow seemed to be equally anguished by the claim that bombing another country, even one which served as a base for the terrorists, would serve as justice. Her plea echoed the phrase made famous by Gandhiji: “An eye for an eye will only make the whole world blind.”

This conviction resonated strongly with others bereaved by the 9/11 attacks, for many subsequently joined a campaign to establish a department of peace within the U.S. government. A similar campaign marked the centenary of non-violent civil disobedience, which too is on September 11. It was on this day in 1906 that Gandhi first made a public appeal for satyagraha — an appeal to truth by non-violent means.

How, you might ask, do such mobilisations and personal appeals of the kind posted in that park help us to grapple with the challenge of putting non-violence into action? For me, all such actions — regardless of their size or impact — provide inspiration and reaffirmation — and not just in an abstract form.

In November 2008, a lethal terrorist strike in Mumbai killed 164 people and wounded at least 308 over three days. Soon after, citizens groups, schools, and colleges collaborated to organise a human chain for peace across the city. As a participant in that gathering do I believe that hands-across-Mumbai-for-peace can directly counter votaries of violence? No, I don’t.

Why then do many people find reaffirmation in such actions? Mostly because stating and repeatedly restating our intention in favour of non-violence is an essential starting point. It is the bare minimum that we can do, the necessary first step which begins a thousand mile journey.

This is why the striving of Mohandas Karamchand Gandhi in this endeavour is so vital to our species’ present and future. Gandhi himself came to non-violence through his own personal struggles. And what was this “non-violence” which Gandhiji learnt? “The non-violence of my conception,” he wrote in the weekly journal Young India, “is a more active and more real fighting against wickedness than retaliation, whose very nature is to increase wickedness.” This meant a mental and, therefore, a moral opposition to immoralities. The foundation of this moral confidence is a passionate rejection of cowardice, which Gandhi sees as being wholly inconsistent with non-violence.

To those who mistakenly see Gandhi as a pacifist, it may come as a surprise that he emphatically states that non-violence presupposes the ability to strike. Therefore, non-violence is “… a conscious deliberate restraint put upon one’s desire for vengeance,” he wrote in Young India. “But vengeance is any day superior to passive…helpless submission. Forgiveness is higher still. Vengeance too is weakness. The desire for vengeance comes out of fear of harm, imaginary or real.”

This is why Gandhiji repeatedly insisted, writing in the Harijan newspaper, that “the path of true non-violence requires much more courage than violence.”

Sceptics have said that this is the purview of saints or saintly persons — it is unrealistic to expect that ordinary people can practise non-violence. This line of reasoning, Gandhiji’s described as “a gross self-deception”: “If mankind was not habitually non-violent, it would have been self-destroyed ages ago. But in the duel between forces of violence and non-violence, the latter have always come out victorious in the end,” he wrote in Young India. “The truth is that we have not had patience enough to wait and apply ourselves wholeheartedly to the spread of non-violence among the people as a means for political ends.”

Since Gandhiji’s assassination on January 30, 1948, this faith, this conviction has been validated many times over — in the civil rights movement of the U.S., during the Tibetan people’s struggle under the leadership of the Dalai Lama, in the struggle against apartheid in South Africa, by the Solidarity movement in Poland in the 1980s, and, more recently, by pro-democracy protesters across the world.

Though he had supreme confidence in the ideal of non-violence, Gandhi remained, to the end, a seeker — striving towards an ideal rather than claiming to have arrived at a goal. “Ahimsa is a science. The word ‘failure’ has no place in the vocabulary of science,” he wrote in the Harijan. “Failure to obtain the expected result is often the precursor to further discoveries.”

We can all draw strength from the fact that even the most rigorous and accomplished travellers of this path have emphasised that non-violence is a work-in-progress.

(Rajni Bakshi is the senior Gandhi Peace Fellow at Gateway House: Indian Council on Global Relations, and a Mumbai-based author.)