For more than thirty years Pav Singh tried to figure out what had happened.

As had Sikhs in India and across the diaspora. Churasee, the Punjabi word for 1984, is a deep wound in the Sikh psyche. People were aware of the barbaric horrors, brutality and violence visited upon Sikhs – men, women and children – in Delhi and other parts of India. The official narrative has always been, that uncontrolled mobs had rioted in revenge at the assassination of Indira Gandhi by two of her Sikh bodyguards. However, no explanation or investigation has ever accounted for the scale of the savagery and its sustained duration through four long days of terror.

Pav Singh’s book, 1984 India’s Guilty Secret, takes us into the heart of what happened. Engrossing, unflinching and balanced, the result of ten years’ research, Pav says he took an evidence based approach, wanting the book to have ‘clarity, purpose and meaning.’ This story of carnage and slaughter took its toll on him. Pav confesses, ‘I used to just write and run away.’ A marathon runner, Pav would go for long runs in the Buckinghamshire countryside, where he lives.

The book provides maps, giving us a bird’s eye view of a bloodbath; narrates the political twists which led up to Churasee; names powerful political figures and makes a grim and deadly claim: it was always going to happen! The Sikhs had to be taught a lesson… A genocide had already been prepared!

‘…atrocities aimed at exterminating a section of a group, whether men, women or children, in a given area, have come to be defined as genocidal massacres. When unleashed by a state, to deal with a “troublesome” minority, they become devastating weapons.’

Sikhs had been firm opponents of The Emergency, declared by Indira Gandhi in 1975, in which she launched a crackdown on civil liberties, arrested thousands of political opponents and dissenters, suspended elections and ruled by decree. Sikhs had initiated a nationwide protest, ‘Campaign to Save Democracy.’ Of those arrested and held without trial during the Emergency, 30% were Sikhs. ‘… something Mrs. Gandhi would neither forgive nor forget.’

Thus, with cold calculation, a pogrom was scheduled for one of Sikhism’s holiest days, the birthday of Guru Nanak, around 8th November. Indira Gandhi’s assassination, on 31stOctober, by two of her Sikh bodyguards, merely brought it forward by a few days, and allowed the slogan of ‘Blood for blood,’ to be a justification.

Pav Singh’s book asserts: ‘But evidence points to a government-orchestrated genocidal massacre unleashed by politicians – with the trail leading to the very heart of the dynastic Gandhi family – and covered up with the help of the police, judiciary and sections of the media.’

Professor A.C. Grayling, in a recent talk at the Southbank Centre in London, made a distinction between violence and war. Violence erupting from the heat of anger is immediate and limited. War (or genocide) is a decision based act: pre-planned, methodical and weaponised. Nidar Singh Nihang further commented: ‘Once war is initiated, the purpose is to annihilate the other side.’

1st November 1984: Delhi, and spanning out across India: a holocaust was unleashed against an unsuspecting people. Gangs of men, armed with iron rods, axes, tins of kerosene, plentiful supplies of tyres, and bags of phosphorus (often used by the military; sticks to skin and clothing, can burn down to the bone), descended on neighbourhoods. Not only weaponised, but informed: carrying lists of Sikh names and addresses from the voter records of Sikh Gurudwaras, cross referenced with school registers and electoral rolls. No-one was to be missed!

Savagery stalked the streets. The most gruesome and horrific methods were deployed: ‘Necklacing,’ whereby a petrol soaked tyre is forced over the chest and arms; deemed to be torture, it takes the victim over 20 minutes to die. Many were doused in kerosene and burnt alive, others were hacked to pieces or beaten to death. Gurudwaras, the Sikh temples, were set on fire, copies of the Guru Granth Sahib, the holy book, were desecrated by urination and burning; Sikh owned shops and homes were set ablaze. Women and children didn’t escape this Armageddon.

Two journalists, who were the first to go into an area where wholesale butchery had occurred, found piles of bodies lying on doorsteps and alleyways, and came across a two-year-old girl wandering amongst the corpses, asking to be taken home. Every member of her family had been murdered.

The abduction of women and mass rapes were a central part of the violence. A recurring element in genocides. In Trilokpuri, where no Sikh man was left alive, ‘some thirty women and girls were abducted…’ In another instance, girls were dragged away one by one and gang-raped. Some returned, some didn’t. One girl was so traumatised she couldn’t remember her name.

‘…the sexual assaults, … in themselves, amount to a mass crime against humanity.’ Yet, they were hardly reported, because of the social stigma around sexual violence in India.

‘Over four days, an estimated 8,000 Sikhs, possibly more, would be slaughtered by rampaging mobs in the world’s largest democracy.’ A number equivalent to the civilian deaths of the Northern Ireland conflict, Tiananmen Square and 9/11 combined.

Many Hindus and Muslims protected and defended Sikhs. In one area, Hindus fought alongside their Sikh neighbours to repel the mob. In another instance, Hindu shopkeepers lay down in front of Sikh shops, declaring the gangs would have to burn them first. Many Delhiites are full of anger at what was allowed to happen. The artist and writer, Shuddhabrata Sengupta, who at sixteen, saw a man being burnt alive, says he has “never forgiven this city.”

Official accounts have presented this genocidal event as a spontaneous reaction to the killing of a beloved prime minister. And yet, questions immediately spring up. Four days of violence and butchery without any intervention by the police? Four days without the government calling in the army? Four days without the authorities imposing a curfew?

The author presents other facts which chill the blood. Witness accounts record instances when the police stopped Sikhs protecting themselves, took away their weapons, and then allowed the mobs to attack; police persuading Sikhs out of hiding, and then standing back as they were murdered. A statement records a police officer overheard saying “you have 36 hours, do what you want.” The Delhi Fire Service later complained the police refused to escort them to fires.

Twenty-nine years later, Cobrapost, known for its investigative journalism and sting operations, aired ‘Chapter 84’ in which eight, former Delhi police officers revealed ‘how they had acted on orders from above,’ implicating the Congress government of the time.

Anyone who knows Delhi, knows that thousands of Sikhs serve in its police force. So, where were they and why didn’t they do anything? The answer takes us further down the blood-stained path. On the morning of 1st November, a radio order from Delhi Police Headquarters instructed all Sikh police officers to “lay down their arms,” and stand down. As they left police stations and unaware they were walking into a holocaust ‘…some were murdered en route to their homes or later on with their families.’

Events darken further: many hospitals, the natural place for the injured and wounded, refused to admit Sikhs. Unusually, some burns units in hospitals were closed – at a time when burns injuries were numerous and devastating.

Salman Rushdie has noted that ‘Sikhs had been the most patriotic of India’s minorities until the trauma of 1984 changed everything.’

When I discussed the book with Pav Singh, he said, ‘The book itself is a search for justice. Getting the story out and starting a debate.’ According to Pav, and human rights organisations, an independent investigation has never taken place. Pav was particularly concerned that the issue of rape has not been addressed, and not a single person has been convicted.

If a genocide against one group goes unchallenged, a culture of permission is created. If it can be done to one group, it be can be done to another. In the book, Gurcharan Singh, who lost his father and ten members of his family, says: “If the 1984 victims had received justice, then people would not have dared to do the same in Gujarat in 2002.”

1984 India’s Guilty Secret isn’t just a powerful book about political malice, but indeed, an attempt to jolt the scales of justice. The following Facebook post by Indi Shambi sums it up:

“I read this book in one sitting and I cried and cried as every truth I have always known was confirmed. 1984 India’s Guilty Secret is a must read for every Sikh because you should know your history, for every Indian because you should know how your country has and is being shaped and by every single person globally as this could easily happen to you and only when everyone knows the truth can justice truly prevail…”

Hot off the press the first copies of Pav Singh’s hard-hitting work 1984: India’s Guilty Secret have arrived at the Kashi House offices. First to check out the book was the author himself who said ‘I think we have produced something even better than what I thought was possible and am very pleased with it.’

He added: ‘Having researched this project for a number of years and now seeing this in print, I find it hard to comprehend that the scale and horror inflicted on the victims has hitherto been bypassed both in India and the world. I have no doubt that this book will shock anyone who reads it.’

The book lays bare the harrowing truth about how the ruling elite of the world’s largest democracy conspired to murder thousands of their country’s citizens in genocidal massacres reminiscent of Nazi-era Germany while the world watched on. Over four days, armed mobs brutally and systematically butchered, torched and raped members of the minority Sikh community living in Delhi and elsewhere. The sheer scale of the killings exceeded the combined civilian death tolls of the conflict in Northern Ireland, Tiananmen Square and 9/11. In Delhi alone at least 3,000 people were killed.

The full extent of what took place has yet to be fully acknowledged. This definitive account based on harrowing victim testimonies and official accounts reveals how the largest mass crime against humanity in India’s modern history was perpetrated by politicians and covered up with the help of the police, judiciary and media. The failings of Western governments – who turned a blind eye to the atrocities for fear of losing trade contracts worth billions – are also exposed. 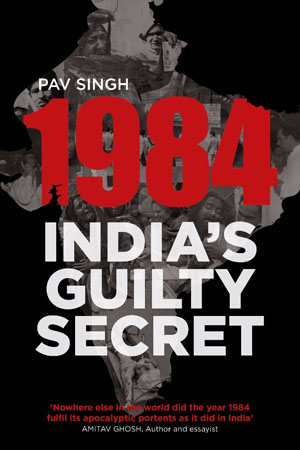 1984: India’s Guilty Secret is now available to pre-order on Amazon UK, Amazon US and Amazon Canada. It will be on general release from 1 November 2017 exactly thirty-three years on from the harrowing events of 1984.

Pav Singh was born in Leeds, England, the son of Punjabi immigrants. As a member of the Magazine and Books Industrial Council of the National Union of Journalists he has been instrumental in campaigning on the issues surrounding the 1984 massacres.

In 2004, he spent a year in India researching the full extent of the pogroms (from which members of his extended family narrowly escaped) and the subsequent cover-up. He met with survivors and witnessed the political fall-out and protests following the release of the flawed Nanavati Report into the killings. His research led to the pivotal and authoritative report 1984 Sikhs’ Kristallnacht, which was first launched in the UK Parliament in 2005 and substantially expanded in 2009. In his role as a community advocate at the Wiener Library for the Study of the Holocaust and Genocide, London, he curated the exhibition ‘The 1984 Anti-Sikh Pogroms Remembered’ in 2014 with Delhi-based photographer Gauri Gill.