He missed out to Malala Yousafzai and Kailash Satyarthi, but Jockin Arputham’s nomination is a landmark for the grassroots 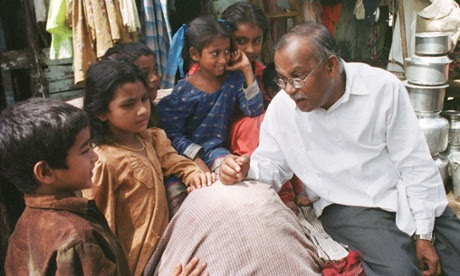 In nominations for the Nobel Peace Prize, grassroots activists usually compete with politicians. Few of the latter, however, have spent their adult lives searching for peaceful solutions to conflict. Among nominees for this year’s prize, one has spent fifty years trying to ensure that disputes between poor communities and state authorities are not only resolved peacefully but that the poor still gain from them. He may not have stopped a war, but Jockin Arputham, together with Slum Dwellers International, the grassroots movement he leads, were nominated this year for their work in giving a voice to the poorest residents of the world’s biggest cities, showing that non-violent protest and negotiation get results.

Arputham’s activism in what are now the Mumbai slums began in the colony of Janata, where he lived and worked as a teacher. He organised children to protest at the lack of sanitation services by marching to the town hall with parcels of stinking rubbish and leaving them on the steps. By linking up with other community groups to defeat schemes to demolish the slums and leave the occupants homeless, he helped set up the city’s slum dwellers’ federation.

The ongoing struggle led to confrontation with Indira Gandhi’s government. Arputham spent 29 days squatting outside the Indian parliament waiting to see her, eventually obtaining an agreement that Janata would not be demolished until its residents were rehoused. But, when he was returning home, Jockin was tipped off that he’d be arrested, so left he got off the train at the city outskirts and spent days sleeping in a drainage pipe to avoid the police. Under Gandhi’s governments Jockin was jailed more than 60 times, forced into exile, and returned to India only when she lost power in 1977.

With the equally renowned activist Sheela Patel of the Society for the Promotion of Area Resource Centres (Sparc), Arputham set up theNational Slum Dwellers Federation. In addition to promoting non-violent but imaginative ways for poor communities to win battles with the authorities, they began pioneering work in enumerating slum settlements and developing community savings schemes. Such schemes, now commonplace but then almost unknown, are based on women’s ability to save small sums while working in solidarity with their neighbours, with shared targets of building up enough money to start constructing small homes or begin small businesses.

In 1996, Arputham and Patel started Shack and Slum Dwellers’ International, which today works in 33 countries on three continents. In doing so, they were pioneers of south-south exchange, in which activists from developing countries learn from each other, unmediated (if often assisted) by northern NGOs. The methods they developed in India are now being used worldwide.

The first of their key innovations was slum profiling and enumeration – profiling is a high-level assessment of the numbers of dwellings and other key aspects of a slum; enumeration provides the fine detail. Why are they important? Fundamentally, as a basis for planning what should happen to the slum and its inhabitants, and politically as a means of showing that real people live in slums, the numbers involved and the danger of trying to ignore them. The recent enumeration of Kampala’s slums by the National Slum Dwellers Federation of Uganda provided previously absent data to the city authorities, doubling the number of recorded slums. It has given the federation an important seat at the table in discussing a city-wide sanitation project. Enumerations have often been used to show the scale of rehousing that would be required if slums were demolished – as underprovision of sites for relocating slum dwellers is a frequent issue. (It arose for example in the relocations in Brazilwhen World Cup stadiums were built.)

Saving schemes are the second key innovation. They are the root to improving slum conditions through self-help, and can also be used to draw in government funding on terms favourable to the savers. The South African Federation of the Urban Poor, for example, boasts 1,500 saving or credit schemes among its affiliates, ranging from 15 to 500 members. Because slum dwellers usually get no subsidy except – perhaps – publicly owned land, savings are often the key way to build up enough capital to start to build a permanent house.

There is perhaps no greater symbol of the gap between rich and poor than the city slum, especially in Mumbai, home of the world’s third most expensive office market. Alongside the flight path from Mumbai international airport, no less than 85,000 people are crushed onto a mere 110 hectares of airport-owned land. India’s high flyers can’t fail to see the slums as their flights take off. Only last month the national governmentannounced plans to start removing them as a ‘security threat’. That could be the next test of Jockin’s non-violent methods.