“The Struggle of the World’s Oldest Hunger Striker” tells the story of Bapu Surat Singh Khalsa (born March 7, 1933) through the voices of his family and activists who helped introduced his struggle to the English-speaking world.

On February 2015, explaining his reasons for going on hunger strike, Khalsa stated: “I have been anguished at the human rights violations in Punjab.” 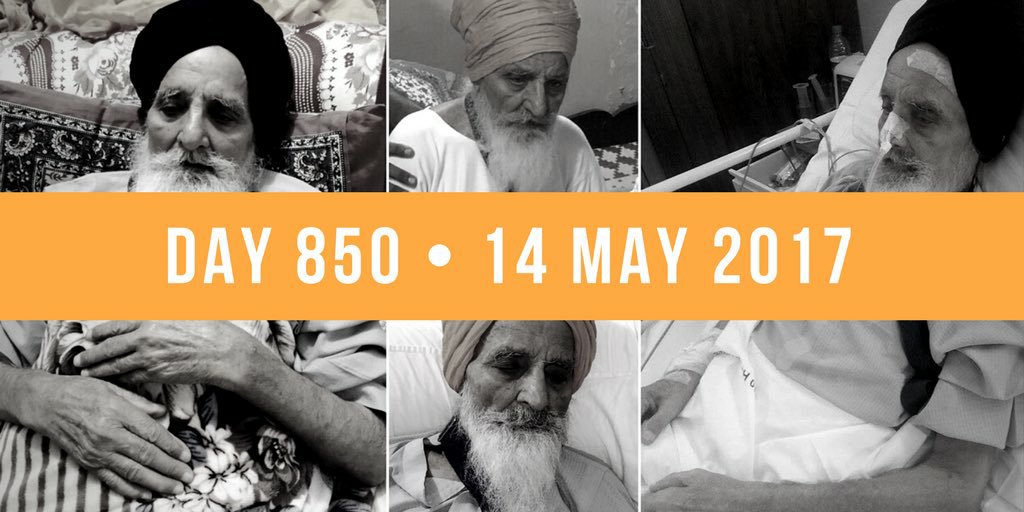 Mandeep Kaur (daughter): “You chose to be here to support our father, Sardar Surat Singh Khalsa, who has been on a hunger strike since January 16, 2015.”

Kulbir Kaur: “He went from here, California. He had everything. He was set here. Had luxury, but willingly gave up everything.”

Mandeep: “He started the peaceful protest at our house in Hassanpur, Ludhiana, in Punjab.”

Surinder: “He’s sitting on the hunger strike for the release of Sikh prisoners who completed their conviction and State government and Indian government denied to release them.”

Mandeep: “And do you guys know why he’s doing this? He’s doing this for humanity. For human rights. For those people whose human rights have been violated in Punjab. In India. Those political prisoners who fought for their beliefs and that have been in the jails for 25 to 30 years. Most of them, you know, a term which is 14 years — they’ve served double their terms, but they’re still languishing in the jails.”

Mandeep: “He was picked up by Punjab Police on 8th of February and thrown in a civil hospital in Ludhiana. They tried to force-feed him, but he did not let them do that. He continued his peaceful protest in the hospital and his voice kept getting heard across the world.”

Mandeep: “Came 26th of February, there was another police action done. Around 300 policemen showed up in the hospital.”

Sahib Singh (grandson): “February 26th, I received a phone call and I heard that there were many policemen walking into the hospital where my grandpa was actually being detained. First of all, they got to my grandpa. And they also took away my father.”

Surinder: “Twenty-sixth of February, I was there in hospital with Bapu Surat Singh Khalsa, and their three daughters, his son, and two or three other relatives. So, police came there. Policemen came there, and they detained all of us.”

Bhajan Singh: “And we are here trying to bring the plight of Mr. Ravinder Singh Gogi,. A businessman. A father of five. A family man. And he is being forcefully arrested in India.”

Sahib: “And when I heard it, I was kind of shocked about what did he do? What made him actually go to jail? What was his fault in this process?”

Steven Macías: “When I think of people going on a hunger strike, I think of India. I think of Gandhi. I think that’s an Indian thing to do to show political protest. So it’s very ironic that you’re covering a hunger strike for political reasons and police are coming and arresting people for doing what India is almost famous for doing.”

Mandeep: “My brother, who was at his bedside to take care of our dying father, was illegally detained by the police. So, apparently, you’re not allowed to be with your father when he’s in the hospital trying to do a peaceful protest in India.”

Fr. Joshua Lickter: “I found out that there were American citizens who were affected by this persecution. Imprisoned without trial simply for speaking out against the injustices that they saw around them. Something that in America here we consider a basic human right.”

Mandeep: “He was in the jail for two months. He was not even brought in for an arraignment. He had five court dates. On one of the court dates, he was brought into a detention cell in the courthouse and beaten up with the metal handcuffs.”

Bhajan: “The Indian State is well-documented by all the international human rights groups that they have been known to pick up people and randomly just kill them and make them disappear. These death squads out there are operating just like the Central America we saw in the 1980s. So, we want to appeal to all our fellow Americans to reach out to your Congressman, reach out to the President of the United States, reach out to the Secretary of State and demand that the United States fight for one of its own — Mr. Ravinder Singh. We want to bring him home so he can be with his family, where he belongs, not in the dark dungeons of an Indian prison.”

Pieter: “We were able to reach out to a number of congressional representatives and get them to approach the State Department to demand assistance for this imprisoned U.S. citizen. And he was released. But Bapuji — he’s still on hunger strike.”

Mandeep: “On the same day, on the 26th of February, they decided that they were not going to let him continue his protest. So they started forcibly feeding him. How? By inserting a feed-pipe through his nose which he tried to pull out a couple of times. He succeeded in doing that. But what next? It was stitched to his nose and his forehead so he could not remove it. So he was told, ‘Ok, you know, try to remove it now.” So, the 82-year-old man, he was just there. They left him in that condition.”

Fr. Joshua: “I stand in solidarity with persecuted minorities in India, be they Christian, Muslim, Sikh. What impacts one community impacts all of us. As I’ve heard the plight of Bapu, I am humbled. I am so humbled by his example and what he is doing in an incredibly difficult set of circumstances and situation.”

Jada: “Surat Singh Khalsa has been arrested again. As he has achieved over 100 days on his hunger strike, there have been no charges filed as the administration force-feeds him. This old man who has become a hero to us all.”

Pieter: “Now Surat Singh Khalsa is joining the ranks of other hunger strikers like Irom Sharmila of Manipur., the Iron Lady of Manipur, who has been on hunger strike since the year 2000 — 500 weeks — in order to protest the AFSPA and the impunity that it grants.”

Irom Sharmila: “Thank you for informing me about Bapu Surat’s hunger strike.”

Fr. Joshua: “Right now, as we speak, a man’s belief is influencing his behavior. Bapuji Surat Singh Khalsa, a man who hungers for justice in India, is fighting back against an oppressive government, in accordance with his beliefs, by not lashing out in violence against his oppressors. He’s not doing that. Instead, he’s taking this hunger for justice upon himself. He believes that even his oppressors are his brothers. His neighbors. And his faith prevents him from bringing violence upon them unless it’s absolutely necessary. So instead, what does he do? He starves himself to show solidarity with those who starve for justice in India.”

Kulbir: “So this being said, we need to remind Bapuji that we are with you.”

Surinder Singh and Mandeep Kaur variously refer to Bapuji as “82” or “83.” The clips in which they are speaking were filmed between March and June, 2015, when Bapuji was just passing into his 83rd year of life.