The Tablighi Jamaat on a campaign to make Muslims ‘purer’, has fierce critics within the Sunnis 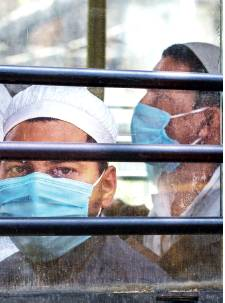 The outlier in the entire jamaat

The Tablighi Jamaat is just one of the many Sunni sects in India known for its hardline position on religious matters. “Hum sirf zameen ke neechey, aur aasmaan ke upar ki parwah kartein hain,” (We are only concerned with what lies in the heavens above and six feet under) is their motto.

This attitude, which disregards many secular concerns, has often put the Jamaat at odds with other leading Sunni sects. Both, the Deobandis and the Barelvis—the two main schools of Sunni theology—are fiercely opposed to the Tablighis.

Most recently, while a majority of the Muslim sects willingly followed government instructions to close their masjids for congregations, the Jamaat refused to wind up its meeting in Delhi, despite circulars banning gatherings from the Delhi government.

Claiming to concern themselves only with matters spiritual rather than earthly, members of this Jamaat spend their time travelling across the country trying to make Muslims ‘better’ Muslims.

The religious preachers travel in small groups, stay in masjids and exhort Muslims to strictly observe Quranic directives, including the “proper” way to pray.

The sect was founded in 1926 by Maulana Muhammad Ilyas Kandhalawi, as a counter to the shuddhi movement of the Arya Samaj which had succeeded in converting many Muslims to Hinduism. The movement’s motto was: “Ai Musalmanon, Musalman bano” (O Muslims, become (true) Muslims). Maulana Kandhalwai concentrated his activities mainly among the Meos of Mewat in Rajasthan, who, despite being Muslim, were indistinguishable in their customs from the Hindus there.

My interaction with individual Tablighi members made me view them as gentle and soft-spoken. Yet, the activities of this sect had a connection with the Malegaon riots of October 2001.

In the villages, as is common in Maharashtra, Hindus and Muslims shared the same lifestyle, together participating in urs and jatras. This was frowned upon by the Tablighi Jamaat members. Finding that many villages had no proper masjid, they persuaded Muslims to build one with a louspeaker. They further instructed them to grow beards and dress “as Muslims.’’ The jamaat also instructed Muslim villagers to stop participating in jatras and urs, to stop celebrating Diwali, and even accepting prasad.

The rise of the Tablighi Jamaat in the villages around Malegaon coincided with the arrival of the Bajrang Dal in the interiors of Maharashtra. The Bajrang Dal focused its campaign on “Islamic and Christian terrorists” who allegedly opposed the construction of a Ram Mandir at Ayodhya.

The combination of the Jamaat outreach on the one hand and that of the Bajrang Dal on the other, resulted in the souring of age-old amicable relations between the two communities. A few months before the Malegaon riots, Muslims in some villages had in fact been asked by Bajrang Dal village committee members not to allow Tablighis to enter. In one village, where a Muslim reportedly desecrated an idol, Dal members removed the then newly installed masjid loudspeaker, and ordered all Muslims to shave off their beards grown under the influence of the Tablighis. When the riots erupted, many Tablighi Jamaat members staying in masjids were specifically targeted.

When I later met them in the hospitals of Malegaon, some of the Tablighi victims expressed bewilderment at having been targeted. “We have been going to these villages for15 years, the Hindus never opposed us. In fact, they would bring a Muslim to us and say: ‘Take him, he never goes to the mosque.’ But the outsiders who attacked us, abused us for building a masjid in the village,’’ one of them had said from his hospital bed.

Incidentally, Tablighis are not welcome everywhere. In the Konkan region, there have been instances of them not being allowed inside villages. Many Islamic scholars regard them as rigid and unreasonable, and disapprove of the men who neglect their Islamic duty of being the guardians of their family, by going off for months on their preaching tours. Some sects also criticize their determination to focus only and only on religion and stay out of politics, at a time when the community is under attack by a majoritarian State.

But in the face of the entire community being specifically targeted for the Nizamuddin crisis, most Muslims have put aside their differences with the Tabligh to offer them public support. Openly communal hashtags like #Coronajehad, are now being answered by hashtags like #IstandwithNizamuddinMarkaz. Only a few brave voices within the community can be heard criticizing the Tablighi Jamaat’s irresponsible behaviour.