The witch hunts, from Delhi to Bastar

In Bastar, as in Delhi, being branded an ‘anti-national’ in the eyes of the government has acquired new meaning. 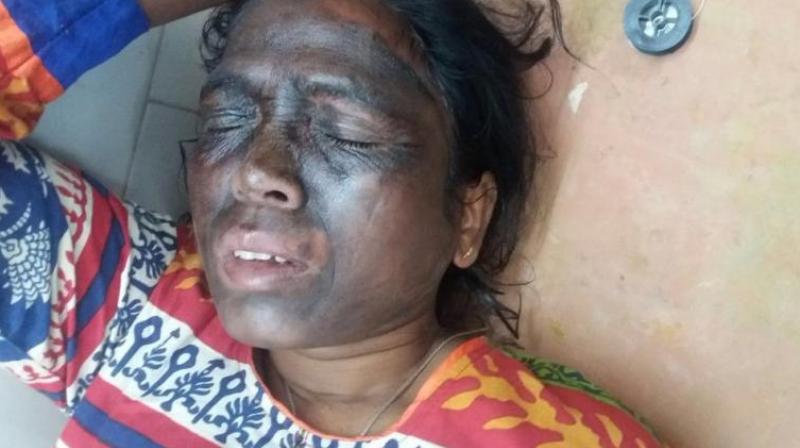 Tribal activist Soni Sori complained of burning sensation in her face after an attack. (Photo: Twitter)

It is difficult to escape the conclusion that Delhi has turned into a battlefront for the right to dissent and freedom of expression. The last time we witnessed an uprising of such proportions, a 23-year-old student had been raped and murdered on the cold night of December 16, 2012. The outrage, over slogans in a university, is divided this time. But the issues raised are no less important — Do we still respect the freedom to question the government, and will those who stand up for others’ rights be protected?

About 1,500 kilometers away from Delhi, in Bastar, Chhattisgarh, these questions are being raised even more starkly. State repression has steadily turned from slow burn to full explosion. For activists and journalists based here, routine questioning by the police is an expected occupational hazard, but now arbitrary arrest is also a real threat.

Local journalist Santosh Yadav has been in detention for nearly five months on trumped-up charges. Even before he was arrested in September 2015, he was frequently harassed by the police (and on one occasion, even stripped and beaten) for reporting on the plight of adivasis in the region, for many of whom he helped secure legal aid.

(Thousands of adivasis, accused of being Naxalites, languish in overcrowded jails in Chhattisgarh. As per data compiled by the Jagdalpur Legal Aid Group, the occupancy rate in jails in the state is 253 per cent, compared to the national average occupancy rate of 114 per cent. In Kanker, it is over 428 per cent.)

Mr Yadav’s lawyer Isha Khandelwal has been providing free legal assistance to adivasi villagers for years now as part of the Jagdalpur Legal Aid Group (JagLAG), with her colleague Shalini Gera. Last week, the lawyers were asked to leave their home by their landlord after he was suddenly called in for police questioning. An eviction notice was similarly served on Malini Subramaniam, who was until recently one of the few national media journalists living in Bastar and reporting on human rights violations.

These activists and journalists have all supported each other’s work. Ms Khandelwal was Ms Subramaniam’s lawyer in her complaint against members of the Samajik Ekta Manch, an anti-Maoist group with links to the state police, who demonstrated outside her house and publicly declared her a Naxal supporter.

Ms Subramaniam had also reported on the arrest of Mr Yadav under the Unlawful Activities (Prevention) Act and Chhattisgarh Special Public Security Act, among other laws. Both JagLAG lawyers and Ms Subramaniam have been driven out of Bastar now, and Mr Yadav is still in jail.

Soni Sori, the adivasi activist who was raped in custody, and detained for several years before being acquitted, has also come under attack. The assailants who threw a black substance on her on the night of February 20, warned her that they would come after her daughter if she continues to raise her voice against a senior police official in Bastar.

Ms Sori had been helping the family of Hadma Kashyap, an alleged “Maoist” whose family claims he was killed in a fake encounter on February 3, to lodge a formal complaint against the same police official.

It is perhaps no coincidence that the hounding out of lawyers and journalists from Bastar, and the attack on Ms Sori, comes on the heels of a series of reports of mass violence by security forces. As the journalist Bela Bhatia, who is herself facing harassment, has reported, there have been three incidents of rural adivasi women reporting multiple gangrapes, sexual assault and violence by security forces since November.

The police have initially refused to register FIRs in all these cases, and only relented following pressure from the activists. The Chhattisgarh police, seldom shy of dubbing journalists as Maoist supporters, have been quick to also use the “anti-nationalism” narrative. Last week, a BBC Hindi journalist in Bastar left an assignment midway after receiving threats.

The seniormost police official in the region, the inspector-general of Bastar, told the journalist in a text message: “There is no point wasting my time with journalists like you. The nationalist and patriotic class of media supports me and it will be better if I spend my time with them.”

In Bastar, as in Delhi, being branded an “anti-national” in the eyes of the government now seems to have acquired new meaning. Once you are declared “anti-national”, you apparently no longer enjoy your fundamental rights under the Constitution. You can no longer criticise the government, and you are no longer entitled to protection against violence, or justice for abuses. In both Bastar and Delhi, as in the medieval witch hunts of Europe, the fires have been lit, and the mobs are standing ready.

'Make in India' on the guillotine
Farmers Protests Targeted - NIA Notices, Arrests, Infiltrators In Protests to Foment Trouble
How Modi's win has changed Mohan Bhagwat's tenor
#India – What next after the SC ruling on #Aadhaar #UID #Biometrics ? #mustread