The woman who nearly died making your iPad #mustread

Tian Yu worked more than 12 hours a day, six days a week. She had to skip meals to do overtime. Then she threw herself from a fourth-floor window 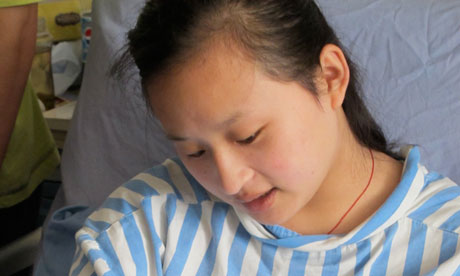 Tian Yu tried to kill herself in 2010, as did 17 of her Foxconn colleagues. Photograph: University Research Group At around 8am on 17 March 2010, Tian Yu threw herself from the fourth floor of her factory dormitory in Shenzhen, southern China. For the past month, the teenager had worked on an assembly line churning out parts for Apple iPhones and iPads. At Foxconn’s Longhua facility, that is what the 400,000 employees do: produce the smartphones and tablets that are sold by Samsung or Sony or Dell and end up in British and American homes. But most famously of all, China’s biggest factory makes gadgets for Apple. Without its No 1 supplier, the Cupertino giant’s current riches would be unimaginable: in 2010, Longhua employees made 137,000 iPhones a day, or around 90 a minute. That same year, 18 workers – none older than 25 – attempted suicide at Foxconn facilities. Fourteen died. Tian Yu was one of the lucky ones: emerging from a 12-day coma, she was left with fractures to her spine and hips and paralysed from the waist down. She was 17. When news broke of the suicide spree, reporters battled to piece together what was wrong in Apple’s supply chain. Photos were printed of safety nets strung by the company under dorm windows; interviews with workers revealed just how bad conditions were. Some quibbled over how unusual the Foxconn deaths were, arguing that they were in line with China’s high rate of self-killing. However conscience-soothing that claim was in both Shenzhen and California, it overlooked how those who take their own lives are often elderly or women in villages, rather than youngsters who have just moved to cities to seek their fortunes. For the three years since, that’s the spot where the debate has been paused. In all the talk of corporate social responsibility and activists’ counter-claims that the producers of iPads and iPhones are still sweating in “labour camp” conditions, you hardly ever hear those who actually work at Foxconn speak at length and in their own terms. People such as Tian Yu. Yu was interviewed over three years by Jenny Chan and Sacom, a Hong Kong-based group of rights campaigners. From her hospital recuperation in Shenzhen to her return to her family’s village, Chan and her colleagues kept in touch throughout and have published the interviews in the latest issue of an academic journal called New Technology, Work and Employment. The result is a rare and revealing insight into how big electronics companies now rely on what is effectively a human battery-farming system: employing young, poor migrants from the Chinese countryside, cramming them into vast workhouses and crowded dorms, then spitting out the ones who struggle to keep up. Yu fits the profile to a T. In February 2010, she left her village in central China in order to earn money to support an impoverished family. As a leaving gift, her father scraped together about ¥500 (just over £50) and a secondhand mobile so she could call home. After a journey of nearly 700 miles, she was taken on at Foxconn. The employee handbook urged: “Hurry towards your finest dreams, pursue a magnificent life.” But Yu doesn’t remember her daily routine as particularly magnificent. Managers would begin shifts by asking workers: “How are you?” Staff were forced to reply: “Good! Very good! Very, very good!” After that, silence was enforced. She worked more than 12 hours each day, six days a week. She was compelled to attend early work meetings for no pay, and to skip meals to do overtime. Toilet breaks were restricted; mistakes earned you a shouting-at. And yet there was no training. In her first month, Yu had to work two seven-day weeks back to back. Foreign reporters who visit Longhua campus are shown its Olympic-sized swimming pools and shops, but she was too exhausted to do anything but sleep. She was swapped between day and night shifts and kept in an eight-person dormitory where she barely knew the names of her fellow sleepers. Stranded in a city far from her family, unable to make friends or even get a decent night’s sleep, Yu finally broke when bosses didn’t pay her for the month’s labour because of some administrative foul-up. In desperation, she hurled herself out of a window. She was owed £140 in basic pay and overtime, or around a quarter of a new iPhone 5. Yu’s experience flies in the face of Foxconn’s own codes, let alone Apple’s. Yet it is surely the inevitable fallout of a system in which Foxconn makes a wafer-thin margin on the goods it produces for Apple, and so is forced to squeeze workers ever harder. The suicide spate prompted Apple CEO Tim Cook to call on Foxconn to improve working conditions. But there is no record of him providing any money to do so, or even relaxing the draconian contractual conditions imposed on Foxconn. Asked about it yesterday, Apple’s press office said it did not discuss such matters and directed me to the company’s latestSupplier Responsibility report. A glossy thing, it opens with “what we do to empower workers” and describes how staff can study for degrees. After her suicide attempt, Yu received a one-off “humanitarian payment” of ¥180,000 (£18,000) to help her go home. According to her father: “It was as if they were buying and selling a thing.” Last year, Tim Cook received wages of $4m – it was a big drop on the package he took in 2011.