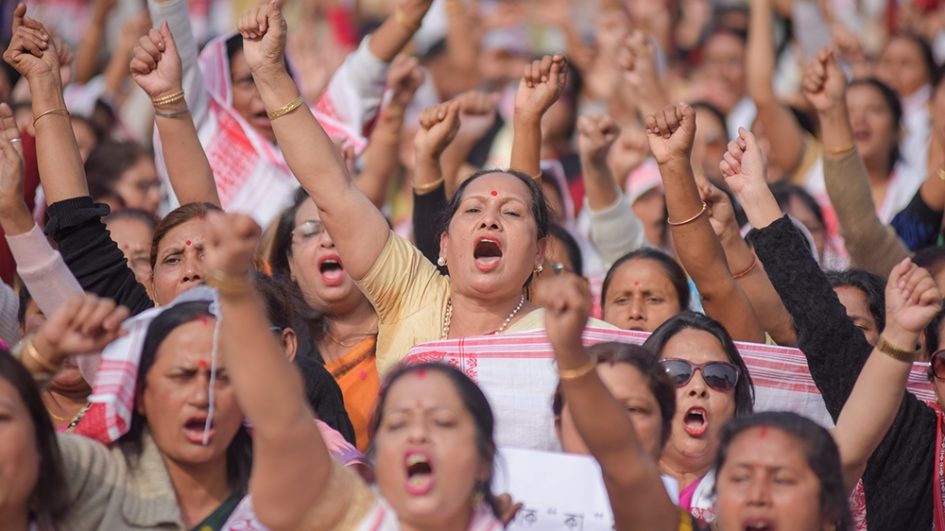 New Delhi, India – “Why is everyone asking why so many women are out on the streets in protest? Women have always been protesting all their lives. Did you just wake up?” asks 20-year-old Salma Khan, a postgraduate student at Jamia Millia Islamia University in the Indian capital. It is about 2pm on December 16, and Salma is holding a heavy box with water bottles and pamphlets for protesters at a demonstration on the university campus.

As protests continue against India’s contentious anti-secular Citizenship Amendment Act (CAA) that excludes Muslims and the National Register of Citizens (NRC), some of the key images galvanising demonstrators are that of young women on the front lines – dancing and singing defiantly, holding witty posters, protecting fellow male protesters from police brutality, handing out roses to the police and gathering in public places in large numbers across the country.

Protesters like Salma, as with many other women students in India, contend not only with getting their voices heard, but also family opposition to their studies.

“My parents would have rather spent money on my wedding than on my higher education,” says Salma who comes from Agra. Four years ago, she finally convinced her parents to allow her to sit the university admission test.

Recently, they saw her in a protest picture. “‘You did exactly what we were scared of. What about our honour now?’ they told me,” she says.

Although the number of women in higher education in India has risen in the past few years to comprise 47.6 percent of the students currently enrolled, the societal expectation is for women to remain passive bystanders when it comes to political protest.

Swati Sinha, 24, a student from Lucknow who has attended every protest march in New Delhi since December 12, the day after the citizenship law was passed, says: “My parents want me to get married soon. First, this country needs to stay worth having a family. It is now or never.”

The determination and defiance of young women like Salma and Swati have become more visible in recent years. The 2012 anti-rape movement in India galvanised mass support and stirred the consciousness of many teenage students at that time. Since then, women’s participation at demonstrations has grown with the help of women-led movements.

Many women cite the Pinjra Tod (Break the Cage) campaign as what introduced them to organised protests. This Indian women’s collective of university students and alumni advocates for less regressive regulations at hostels and other college accommodation for female students. It counters the security narrative that these places use to restrict women from being in public spaces. Many Indian colleges impose arbitrary curfew timings as early as 5.30pm for women residents citing security reasons.

The campaign, which saw women take to the streets at night to protest, spread quickly across women’s colleges in India. Thousands of students protested against the time restrictions and demanded that “safety” and “security” should not be used to silence women’s right to mobility and freedom among others. Campaigns were successfully led at Jamia Millia Islamia University, Delhi University, Aligarh Muslim University, Punjab University, Banaras Hindu University, and many more.

“A lot of media is calling students ‘first-time protesters’. Were they blind to us protesting against curfew timings, sexual violence, #MeToo cases? Do they only notice protests driven by men? Women students are actually well trained in mobilising through practice,” says Salma, who participated in a 2015 project denouncing rape culture by posting sanitary pads with protest messages around Jamia University.

The protest may have been led by men in many parts but how did they spread so quickly across the country? Because women students have been quietly working round the clock from their homes in an organised manner.

A number of women are maintaining the hidden infrastructure of the continuing CAA protests across university campuses.

“The protest may have been led by men in many parts but how did they spread so quickly across the country? Because women students have been quietly working round the clock from their homes in an organised manner to circulate messages regarding protest venues and subsequent police action,” says Swati.

When a number of students were beaten up by the police on December 15 at Jamia University, students at the on-campus hostel for girls from the state of Jammu and Kashmir provided first aid to some 150 female and male students. In August this year, the disputed region was split into three union territories by the Indian government. The internet blackout and the communication blockade continue in Kashmir, now for more than 140 days. It is the longest ever internet shutdown imposed by a democracy.

Bushra Khanum, 21, a second-year postgraduate student who lives at the hostel, says: “We have grown up with police and army brutality all our lives. We know how to treat teat gas itches, skin burns and baton injuries.”

Fighting for an education

Najima Begum, a 24-year-old doctoral student at Jamia University who comes from Imphal, in the country’s northeast, joined the protests partly because of her own struggle to pursue an education.

When she was 18, her parents locked her inside her room for more than a week because she wanted to go to New Delhi. “I refused to eat anything all those days,” she says. Her parents were opposed to sending her 2,500 kilometres (1,553 miles) away for her education.

“Mine is a conservative family. Most women are born to get married. They could see no reason to send me away only if they had to find me a groom eventually,” she says.

She stuck to her demand. Ten days later, her parents gave in.

Najima grew up in Manipur, a state which like Kashmir is under the controversial Armed Forces Special Powers Act that allows security forces to arrest people, search any premises, and fire upon anyone with complete legal impunity. Human rights violations including killings, disappearances and sexual violence by security forces have been reported in the state.

Women display placards during a protest in Kolkata on December 22, 2019 [Reuters]

Because New Delhi was her escape from the violence she witnessed while growing up, Najima says she avoided “political things” at university. Yet, she could not hold herself back from participating in the current protests.

Najima researches biotechnology and its effect on the poor. Part of her fieldwork involves visits to the Rohingya settlement near Kalindi Kunj, just 5km (3 miles) away from the university campus. She says that since the CAA was passed, there is a sense of despondency among the teenage girls in the settlement.

“A couple of them have been waiting for the past two years to apply for admission in class 10, but as refugees, they do not have the right paperwork to do so because they are not Indian citizens,” she says.

According to the latest home ministry data, there are more than 14,000 UNHCR-registered Muslim-majority Rohingya in India who fled religious persecution in Myanmar. However, security agencies estimate the number of Rohingya living illegally in India to be 40,000.

“With the Citizenship Act, now it would be impossible for many of them to get a college education because of their religion. Many may meet the same fate as the deported family,” she says, referring to a family of five deported back to Myanmar in January.

Najima says that she joined the protests because “she understands the meaning of higher education in a woman’s life”.

Since the protests erupted, her parents have demanded that she return home. “I now know Manipur, Delhi, and Kashmir are alike. So let me just deal with my parents at home and I will be back to deal with things here. I won’t stop,” she says.

Rising sectarianism, casteism, inflation, unemployment – the women are at the receiving end. All kinds of restrictions are being imposed on women in the name of honour and community.

With many hostels closing for the winter holidays, Subhashini Shriya, a founding member of the Pinjra Tod campaign, says that once home, many women are not allowed by their parents to attend local protests.

But pictures of women at the forefront of the protests have helped create an atmosphere of security that has inspired other women to keep returning – and more to join.

Subhashini says: “In the past few years, women’s participation in all mass movements has also increased because there have been consistent women-led movements to make the public domain more accessible.”

Sarika Chaudhary, 23, a master’s in philosophy student at Jawaharlal Nehru University and protester, sees women demonstrating as a mark of solidarity with those affected by the NRC – which requires a trail of documentation women often do not have such as voter cards to prove being a legal citizen – and to protect the personal rights they have fought hard to win.

“The rising sectarianism, casteism, inflation, unemployment – the women are at the receiving end. All kinds of restrictions are being imposed on women in the name of honour and community,” she says. “They feel the urgent need to protest because they don’t want to lose the freedoms they have fought so hard for at home and outside.”

Demonstrators shout slogans during a protest against a new citizenship law, in Guwahati on December 21, 2019 [Reuters]

For the first time in her life, on December 19, Nargis Saifi, 33, a stay-at-home mother with a six-year-old daughter was arrested by the police at the protests against the CAA and NRC. Later, she received several calls from her extended family members reprimanding her for being an irresponsible mother.

“I told them that I am protesting for her rights too,” she says. “And for the rights of homeless people, my domestic worker and anyone who has no documents because they are too caught up in their struggles to stay alive every day.”

Back at the protests, Salma disconnects a call from her parents who are ringing to convince her to return home.

“Women are not just protesting for their rights,” she says, “but for the rights of everyone, in the hope that others will stand up for our rights too.”

Some names have been changed to protect the identity of the students. Salma Khan, Swati Sinha and Najima Begum are pseudonyms.